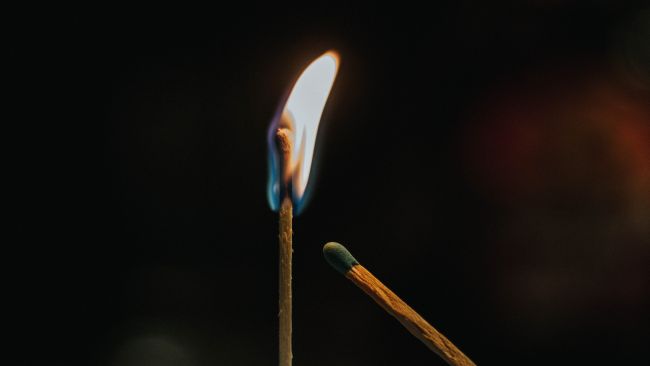 This mishna was authored by Rabbi Akiva, one of the greatest sages of the Mishna. The Talmud tells us that he was an unlearned shepherd until the age of forty, at which time — on the prompting of his wife — he went off to study Torah. He began his career studying the aleph-bet with the youngest schoolchildren. Twenty four years later he returned home, leader of the generation, followed by thousands of students. He attributed all his Torah study to his wife’s devotion (Talmud Kesuvos 62b). He met his death brutally at the hands of the Romans for teaching Torah publicly (Talmud Brachos 61b).

This mishna recommends a number of protective fences which safeguard or foster proper Torah observance. The first warns us to refrain from loose, unbridled behavior when in mixed company. The Talmud states — in the context of adultery but in reference to all sins — “A person does not sin unless a spirit of ‘madness’ enters him” (Sotah 3a). Anyone who thinks rationally — who considers long term consequences rather than immediate gratification — realizes that wickedness does not pay. One of the most basic tenets of Judaism is that we will be brought to task for all our actions (Fundamental 11 of Maimonides’ 13), if not in this world then in the next. And Divine retribution will most certainly be more severe than the few moments of pleasure evil has to offer. Only if we do not allow ourselves to think consequences — thanks to the “madness” of lightheadedness — will we allow ourselves to operate in blissful ignorance of this truism.

If there is any one area in which Judaism goes to an absolute extreme, it is the separation of the sexes. Traditionally, boys and girls from very young ages were sent to separate schools. In the synagogue men and women would pray on separate sides of a partition (‘mechitza’). Mixed social gatherings and dating were almost non-existent. And (as we know from “Fiddler on the Roof”), even marriages were prearranged by the parents, possibly through the meddling of a matchmaker. The prospective couple met briefly if at all before the “shidduch” was finalized. (Some of us might consider those the good old days. If it were only so easy — and inexpensive…) 😉

Much of this practice has its basis in Jewish law. One illustrative example: A man and woman are forbidden to be alone together — in a private setting where others are unlikely to intrude. This is certainly not an unfounded concern. But it goes further. This law is extended by the Rabbis to the earliest age a girl might be considered at risk with the opposite sex — according to some opinions three years of age. Well, there are certainly sick-o’s out there; there is no doubt about that. But is it really necessary for the Rabbis to make such a blanket decree? Do the Rabbis really think that the average man cannot be trusted babysitting a three year old child?! Who do the Rabbis take us for?

Our Sages, however, understood human nature far better than we. This is one area in which Judaism tells us to run the other way as fast as we possibly can. Do not just trust yourself; you are playing with fire. There are no “safe” and “harmless” ways of engaging the opposite sex, just as there are no non-volatile ways of playing with dynamite. We cannot open Pandora’s Box, assuming we can contain it afterwards. Be careful what we expose our children (and ourselves) to. Don’t allow home entertainment to be a means of glorifying and inculcating us with sexual fantasies. And don’t place young men in an environment in which they will waste all their energy and effort trying to impress members of the opposite sex. At least let our synagogues be a place of uninterrupted focus on prayer.

And neither should we make young ladies feel that they are objects, that they are less “important” if they are not as attractive to men. Let young men and women concentrate on developing the talents of youth (whatever they are — can’t actually remember any more). They can consider marriage when they are emotionally and psychologically ready — not when they are physically interested. The Torah says it straight. Its outlook has never been popular; there are many who would like to dismiss it as old-fashioned and anachronistic. But the Torah speaks truth, without shame or timidity — and with no regard for public opinion. It is we who are not always willing to hear.

We now move to the next statement of our mishna. (This mishna contains much important advice; we will deal with it over the course of a few classes.) I would like to discuss one more statement this week — that of the oral transmission being a protective fence for the Torah.

Most commentators understand the oral transmission (‘mesorah’ in Hebrew) as referring to what we call the Oral Law. This is the part of the Torah which was originally taught to Moses at Sinai orally and not recorded in writing. Whereas Moses was handed the Ten Commandments at Sinai and was instructed to record the Five Books of Moses in writing, much of the explanation of the Torah was studied by heart and committed to memory. The Talmud states that it is forbidden to recite the Written Torah by heart (according to some this applies only to public readings in the synagogue), and it is forbidden to write down the Oral Torah (Gittin 60b). The Sages of later generations, however, realizing that such a vast body of knowledge could not be retained through memory alone — especially through prolonged exile, began the process of recording the Oral Law, first in an abridged form know as the Mishna (c. 200 C.E.), and later in the more extensive form of the Talmud (5th century).

Both the written and oral parts of our Torah are integral to our tradition. The written Torah alone provides little detailed direction regarding the how’s and why’s of Judaism. It consists of inspiring stories and poetic exhortations, but leaves most of the details to the reader’s imagination. Even the laws it does state are vaguely defined at best. The Mishna writes that many of the basic precepts of Judaism, such as the Sabbath, are as “mountains hanging on hairs” (Hagiga 1:8) — meaning mountains of technical detail built upon passing Scriptural reference. In truth, however, G-d never intended the written Torah to be self-contained. As our mishna states, the oral law is a protective fence for the written. It gives the written place and structure, allowing its eternal truths to permeate every level of existence.

This brings us to an important question. If the oral law is really so central to the Torah, why did G-d decree that it be oral, to be entrusted to Israel’s collective memory? Why not write it down too? Was it less important or less concrete that there was no great need to write it out in every detail?

Well, I seemed to have opened a bigger can of worms, er — deep philosophical discourse — than I intended. I think it best at this point to divide this discussion G-d willing for the next installment!