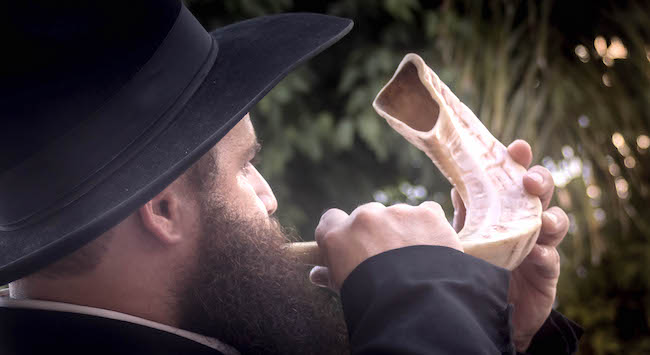 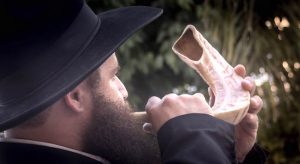 The Mitzvah: Rosh HaShanah is called Yom Teruah, “the day of shofar blasts” (Numbers 29:1). Every Jewish male is obligated to hear at least nine sounds from a shofar, the horn of a kosher animal, usually that of a ram. Although a time-bound commandment for which women are generally exempted, it has become customary for them to also hear the shofar. There are three types of sounds: tekiah (the long blast), shevarim (three short bursts) and teruah (nine short bursts). The shofar is not blown on the Sabbath due to a rabbinical decree.

The start of the new calendar, unlike other cultures, is a solemn and sober affair. The Jewish New Year is the birthday of mankind as Adam, the first man, was fashioned on 1st of the month of Tishrei, the sixth day of creation.

So why rather than celebrating this event, is Rosh HaShanah, the awesome “Day of Judgement”, the date when every person is summoned before the Heavenly Court? And how is the essence of this day captured in the shofar and its symbolism, bearing in mind this festival’s description as “the day of shofar blasts”?

An anniversary is the auspicious time for an accountability of the commemorated event. Here the aims, goals and objectives are critically reviewed. An annual review of a company’s operations at the year-end takes stock of the past performance. Here the firm’s strengths and weaknesses are exposed; the profit/loss account is assessed, its successful ventures and failures are highlighted.

This process is played out for every individual on Rosh HaShanah.

Man’s birthday provides the necessary opportunity to rigorously investigate his performance. Resolutions for the forthcoming year are, of course, most welcome. Repentance for past misdemeanors is very much on the agenda.

Why man was created and his life goals penetrates to the heart of the day. The New Year is the annual review to judge whether or not an individual is accomplishing his purpose.

The major theme of Rosh Hashanah is proclaiming G-d’s Sovereignty over the universe.

More than any other creature, the task to crown G-d as his Master and King by humbly submitting his personal will is man’s alone. And on the first day of man’s creation, the original Rosh HaShanah, that is exactly what he failed to do when Adam defied G-d by eating from the Tree of Knowledge. The commitment to realign man’s will so that it reflects the divine will, is our goal and aspiration. What instrument better to do this task than the mitzvah of shofar.

Alerting him that all is not well, the shofar is a wake-up call. “O sleepers, arise from your sleep! O slumbers, arise from your slumber! Scrutinize your deeds and lovingly repent! Remember your Creator! Peer into your souls, improve your ways and your deeds.” (Maimonides, Laws of Repentance 3:4). Like war cries, the penetrating blasts of the shofar arouse fear and dread into the ears and hearts of the listeners (Amos 3:6).

These, in turn, elicit the rarified shofar sounds “within” man himself; inner groaning and wailing (signified in the shevarim or teruah bursts) as he cries out for past wrongdoings for not serving G-d by scrupulously performing His commandments. The rumblings of teshuvah, repentance, the shofar calls for his “improvement” related to the phrase “shif’ru ma’asechem, [improve or] beautify your deeds” (Midrash Vayikra Rabbah 29:4).

The shofar recalls the Patriarch’s self-sacrifice to fulfilling G-d’s will, best exemplified in the episode of the akeidah – itself, the Torah portion read on Rosh Hashanah – Avraham binding his son Yitzchak as an offering to G-d (Genesis 22). The ram sacrificed in lieu of his son is immortalized in the shofar, that is typically a ram’s horn (Talmud Bavli, Rosh HaShanah 16a). The shofar further recalls the horn blown at Sinai when Israel sealed their covenant with G-d (Exodus 19:16) while affirming the permanence of creation with their acceptance of Torah. And it prods mankind onwards and upwards to continue to work towards the final redemption and ingathering of the Jewish people heralded by the sounding of the shofar (Isaiah 27:13) when all of mankind will universally proclaim G-d as their King.

Appropriately, therefore, the shofar takes center stage on Rosh Hashanah. On the birthday of mankind, its penetrating sound is man’s urgent “court summons” jolting him to his annual review as he resolves to crown G-d as his King and to plead for a new year of life.