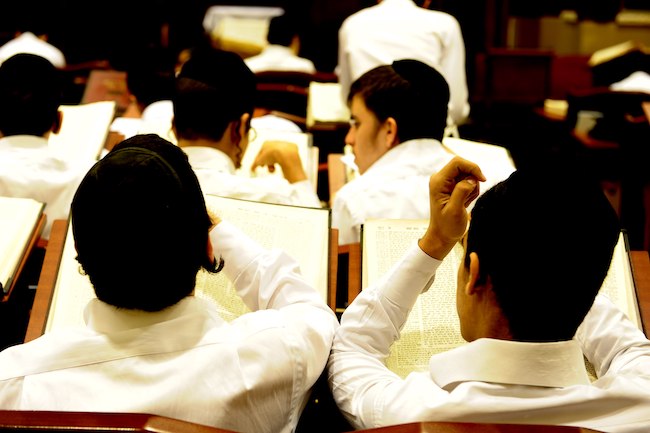 Seven things apply to an uncultured person (Heb: ‘golem’), and seven to a wise person. A wise person does not speak before one who is greater than he in wisdom or years; he does not interrupt his fellow; he does not rush to respond; he asks relevant questions; he answers accurately; he discusses first things first and last things last; on what he did not hear, he says ‘I did not hear;’ and he admits to the truth. The opposite [of these is true] of the golem.

This mishna compares the qualities of a wise person to that of a “golem”. The Hebrew word golem literally means an unfinished object, such as a utensil which has been shaped but not polished. (This term is more famous for the artificial humans created via Kabbalistic means — who too are not-fully-functional creatures.) Thus, our mishna is comparing the qualities of a “finished”, mature scholar to one of less advanced scholarship.

It is clear that our mishna is not defining wisdom based upon natural ability. Our mishna does not state that the wise person is the one smarter, quicker or possessed of a better memory. For that matter, such comparisons would not rate very high from a Jewish perspective. IQ levels are G-d-given and not in our hands to control. In Judaism, wisdom and accomplishment are not measured according to natural ability — according to what we were handed at birth. It is measured by how well we use what we were granted.

Our mishna is thus not comparing the brighter person to the one we’d today call “challenged”. It is comparing two people of equal potential. What makes one the scholar and the other the golem? To bolster our question, we note that Maimonides describes the golem not as not some coarse, mindless brute (as the classical Jewish golem conjures). It is — as we defined — a functional utensil, lacking only in finishing touches. The “golem” too is studying, accomplishing, and absorbing Torah knowledge. He too no doubt sees the depth and beauty of the Torah — Who studies and does not? — and realizes that Torah study is the surest path to knowledge of and closeness to G-d. If so, what is lacking with him?

The answer is existence.

If I’m learning Torah because I want to get closer to G-d, then the root of my desires — as worthy as they are — is self-centered. On the most fundamental level, such a person is studying for his own sake — in order to get something out of it. As ennobling and enriching the study of Torah is, the element of “self” — and of ego — is not removed from such a person.

The true scholar, however, is one who is not looking out for himself at all. He studies because he wants G-d’s will fulfilled. He wants G-d’s Torah understood and disseminated to mankind — and he desires to do whatever part of that lofty mission he is able. He thus becomes a “finished” utensil: By removing the thick shell of “self”, his very innards become molded by the Torah and refined by its teachings. The Talmud writes that Torah is acquired only by one who makes himself “as one who is not” (Sotah 21b). If Torah study begins with G-d, it is selfless and true. And the results are not only a greater scholar but a “shaped” individual — into a Torah personality.

The distinctions listed in our mishna are now clear. If I want to be (and be recognized as) a great scholar, I will be anxious to get my words in edgewise. I may speak out of turn — before someone greater than myself. I may be more interested in making my own insights heard than discussing the matter at hand. Thus, my questions will be less relevant and my answers less organized and accurate. I will certainly be loath to admit my errors or lack of expertise — as such admissions would serve as painful reminders that I’ve fallen short of my life goal. (We scholars sometimes have the bad habit, when faced with a question we cannot answer, of half-way changing the subject in order to cough up something intelligent to say.) 😉 Finally, such a person will easily get overly-enthusiastic about his studies. He will rush to respond, possibly cutting off his fellow’s words.

It should be stated that the “golem” of our mishna is far from the conceited egotist we have depicted — we could use a lot more such. It’s perfectly natural and acceptable to become emotionally involved in one’s own life works. We all want to do well in our endeavors, and we all crave recognition. The Talmud writes similarly: One should learn Torah even not for the sake of Heaven (for e.g. recognition), because from insincere motives he will come to sincere ones (Pesachim 50b). Study whatever your reason may be (unless it is positively destructive). But keep plugging away. Eventually G-d’s Torah will work its magic on you — and you will unwittingly become a true person of wisdom and character.

The true scholar, however, exists on an entirely different plane. He has entirely annulled himself to G-d’s Torah and G-d’s will. His goal is to understand G-d’s word alone. It is true there are precious few such people in a generation. But they should be sought wherever they may be found. They possess a unique perspective on Torah and connection to truth.

It was said about my teacher R. Yaakov Weinberg of blessed memory, previous rosh yeshiva (dean) of Ner Israel Rabbinical College, that he would often be invited to address Jewish organizations, many of whose religious outlooks differed greatly from his own. He rarely turned down such offers — though the results to say the least were often contentious. (I heard from someone who attended one such gathering that his lecture basically degenerated into a shouting match (and I doubt he did much of the shouting).) Friends and family asked him, why should he, a leading scholar of the generation, subject himself to such shameful treatment? Why bother with such organizations? There aren’t enough Jews who do have the proper respect for him that he has to expose himself to such?

He responded, simply and matter-of-factly — almost putting the questioner to shame: It was a chance to teach Torah to fellow Jews: why wouldn’t he go? His poor treatment, the insult to his pride — as well as the raised eyebrows in other Orthodox circles at his association with such organizations: none of these in any way entered his cognizance. His life mission was to spread Torah. He came to speak for truth and G-d’s Torah. No other considerations — personal or otherwise — would in any way infringe upon his goal.

That was the type of man, the few of the generation, who lived, spoke, and breathed Torah. (It is a matter of personal pride to this writer to have had the merit of a personal relationship with him.) Such people should be sought out and their words followed. They speak truth — impartial and unadulterated, and they reflect a purity and holiness of Torah knowledge so rarely seen yet so sorely needed today.