Chanukah: The Shape of the Menorah

When the Maccabees returned to the Temple after having defeated the Syrian Greeks, they needed to replace numerous Temple vessels which had either been stolen, defiled, or broken. Of special importance in the Chanukah story was the fact that the golden Menorah of the Sanctuary was no longer present, having been stolen by Antiochus four years earlier. As a temporary measure, the Jews fashioned a Menorah made out of iron. When they became more affluent they replaced this Menorah with one of silver, and later still they were able to replace the silver Menorah with one of gold (Rosh Hashanah 24b).

The seven-branched Menorah is described in great detail in the Torah (Exodus 25:31-40). Even so, the Torah omits one very basic detail which has led to divergent opinions on the matter: whether the Menorah’s branches were straight or curved. 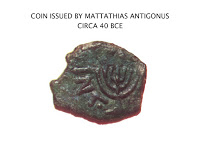 There are a number of archeological finds which may shed light upon this question. A coin minted by Mattathias Antigonus circa 40 BCE depicts a candelabra with curved branches. As this was a Jewish coin it has been argued that this depiction surely was meant to be an accurate representation of the actual Temple vessel, lending support to the theory that the Menorah of the Sanctuary had curved branches. 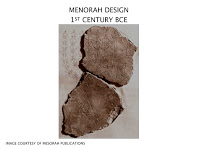 Jerusalem and it shows a portion of a 7-branched candelabra with curved branches The ornamentation is excessive for what is described in the Torah, but it would not be surprising for the artist to have made such an error since the Menorah of the Sanctuary was only rarely visible to the general public. Those who assume this to be a depiction of the Sanctuary Menorah would argue that while the artist may have guessed at the finer details of the cups and flower designs, the overall shape of the branches would be easily remembered and thus would not have differed significantly from the original. 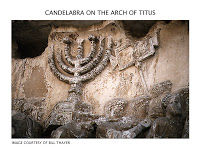 One of the most famous depictions of a 7-branched candelabra from the Temple is found upon the Arch of Titus in Rome. The triumphal arches of that time were meant to serve as historical records of the events they depicted and are therefore assumed to be very accurate. In one of the scenes on this arch a procession carries the Temple vessels out of captured Jerusalem, and featured among the treasures is a candelabra. The prominence given to this candelabra ostensibly is an indication of its importance, which leads many to speculate that this is the Menorah from the Sanctuary. As can be clearly seen in the picture, the branches are curved.

Others argue that this surely could not have been the Menorah of the Sanctuary since the base is nothing like we would expect the real Menorah to have. First, its two-tiered, octagonal design is a novelty. Second, archeologists have concluded that some of the creatures depicted on its panels are sea serpents, and Jews would not have allowed such heathen images in the Temple.

In stark contrast to the above finds is the image shown here of a drawing attributed to the hand of Rambam (Maimonides). Unlike the previous pieces of evidence which may or may not 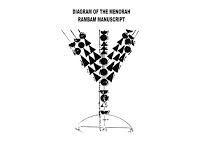 have been depicting the actual Menorah of the Temple, this drawing does just that. It is intended to be an accurate rendering of what the Menorah looked like, and while it is not drawn to scale, all of its components and dimensions are labelled.

From the fact that the curvature of the base is drawn so precisely, most likely with the aid of a compass, it is apparent that the artist could just have easily drawn curved branches had he so desired. We may conclude that, in the view of Rambam, the Menorah of the Temple had straight branches. 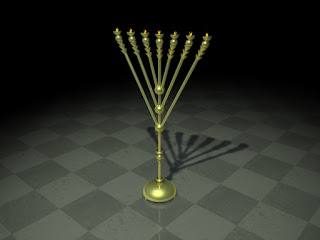 3-D rendering of what the Rambam Menorah would have looked like.

To submit questions or comments for the author, please visit the blog post of this class.