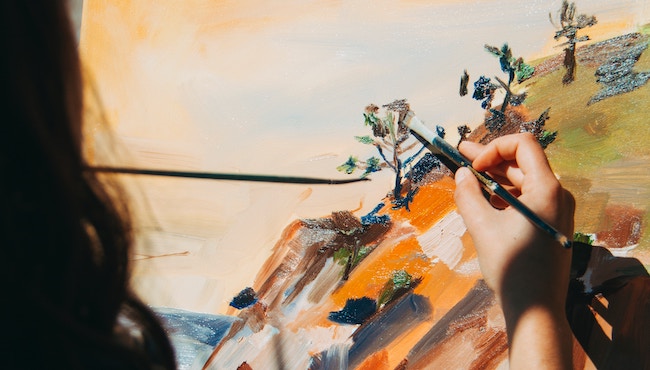 By Mrs. Gila Manolson Transcribed and edited from her lecture at the Third International Jewish Women’s Conference on May 21, 2000 in New York City.

Part 2 of “Inside/Outside” continues to explore the Jewish idea of “tsniut” (loosely translated as “modesty”). This week’s focus is on its connection to the Garden of Eden as well as to the life of today’s Jewish woman. Author Gila Manolson is internationally renowned for her fresh approach to the complex issue of tsniut. The following text has been edited with her unique style in mind. As such, it reads in a somewhat stream of conscious, real life manner, rather than as a formal essay. Mrs. Manolson’s books, The Magic Touch and Outside/Inside are widely available at Jewish bookstores.

We’re told that Adam and Eve’s existence in the Garden of Eden was perfectly pristine, that they saw each other with eyes of truth. Which means that, at the same time they saw each other on the outside, they also saw right through to the inside. Genesis 2:25 tells us, “They were both naked, man and his wife, and they were not ashamed.” In other words,body and soul were one inseparable unit. It’s almost as if the body was a sheer or diaphanous garment that simultaneously clothed yet also revealed what was underneath.

Enter the snake. The word for snake in Hebrew is “nakhash,” and the word nakhash is related to the verb “l’nakhesh,” which means to guess. The snake represents imagination and illusion, and we’re told that when Man and Woman ate of this fruit the purity of their perception changed for the worse. Imagination, the ability to perceive reality in a distorted, unclear, untruthful way, entered into their consciousness. For the first time, their body/soul unity was split. This introduced the potential for seeing the body as just a body, without seeing through to the soul any more.

As a result, Adam and Eve ran for their fig leafs; suddenly they felt this need to cover themselves up. As a result of their fatal mistake in the Garden of Eden, God lowered an illusion-creating screen, which caused them to see body and soul as two distinct entities. The powerful light of the body now outshone the light of the soul. “Then the eyes of both of them were opened and they realized that they were naked…” (Genesis 3:7). Enter the possibility for objectification of the physical, which till today causes tremendous problems in male/female relationships.

“Tsniut” – Judaism’s response to events in the Garden of Eden – enables us to have a healthy attitude towards the physical without losing focus on our internal self. Tzniut inspires us to ask,”how can I still look good, how can I still have my talent, have my job, have all these things that are a part of me, but not let them define me; use them in a way which draws people’s attention to a deeper level of me, not write them off, not deny who I am, but use it in service of making a deeper statement about who I am.”

Easier said than done, of course. For many, tsniut is a life-long struggle. It isn’t something you just immediately click into when you put on a long skirt. We’re talking about something a little bit more complex. Nonetheless, clothing is still the physical currency, the external expression of the internal reality that tsniut creates. R’ Zev Leff summarizes the Jewish perspective on this inside/outside relationship: “Wherever there is an internal spiritual dimension that could be forgotten, we modestly cover the externals to emphasize that there is more here than meets the eye, that the essence is the spiritual core and not the external fa�ade.”

The problem is that today we’re not always so sure that others are capable of seeing, and especially of appreciating, our inside self. It’s a particularly big challenge for singles, and I think it’s a challenge for married women as well. I don’t think the desire to be able to turn a man’s head immediately vanishes upon getting a wedding ring on your finger. I wish it did. I’m saying it’s still so much a part of what we’ve been cultured to need for our self-esteem that it doesn’t just click off once you’ve gotten a man. There’s a part of a woman that still feels if she walks down the street and no one notices her, she’s invisible, she doesn’t exist. And all the more so when you’re single and you are particularly trying to get somebody, because all of us know, particularly in the sex-saturated society we live in; in order to get someone you have to be not only personally but physically attractive. And that’s realistic. The problem comes not in understanding that, but in deciding which foot to put forward first.

The way we dress doesn’t just effect how other people see us. It effects the way we see ourselves and how we feel about ourselves, which means it’s a very, very powerful venue for self-definition, and we have to know how to use it, because when you get into the spiral of other people responding to you based upon how you’re presented, and you internalize that self-image, again, it can spiral you right down, or you can use it to spiral you the other way. There’s value to dressing in a way that challenges people to look at you for who you really are. Some may respond, “I know who I am. I know I am a spiritual being, I know there is more to me than meets the eye. I happen to like to wear short shorts and bikini tops in the summer because it’s hot. And if I walk past a construction site and the men whistle and catcall, does it matter? I know who I am.” Would that it were so. None of us lives in a social vacuum. We are all very aware of how other people respond to us. That very much cycles into our self-image.

Tsniut is a big combination of what you wear, how you walk, how you carry yourself. What could be modest on one person, and not just because of her body, but because of who she is as a person, might be totally immodest on another person. Every woman has to just simply ask herself the question, at any moment in time just stop and ask yourself: “The way I’m presenting myself right now, am I drawing more attention to who I am on the outside or who I am on the inside?”

« Inside/Outside Part I
The Prophetess Hulda: Her Message of Hope Part I »