Room for a Broom 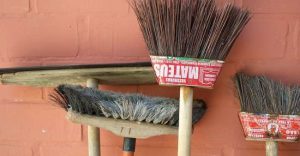 “Tzav,” Rashi explains, “is a very powerful word. It means command with a charge that is to be executed with speed and diligence. The word tzav,” Rashi continues, “is also used only for situations that have eternal ramifications.” If we analyze the next few commands, we may be left wondering: why do those charges need the powerful preface Tzav?

The next verse is about the Korban Olah. A Korban Olah is a sacrifice that is committed entirely to Hashem, no part of the animal, save the skin, is left for human benefit or consumption. The person who brings it wants to make sure that it is offered within the highest standards of Halacha. The admonition, tzav surely is appropriate. However, the Torah only spends one verse on the Olah. It proceeds to tell us about the daily cleaning of the ashes of the altar. A Kohen must wear linen vestments, remove the ashes, and place them near the altar.

Why is this menial job mentioned together with the holy Olah? To what end does it merit the powerful command, tzav?

The Steipler Gaon, Rabbi Yisrael Yaakov Kanievski, was a paradigm of holiness. The stories about his sanctity were well known throughout the Torah community. At seventeen, he had already survived the Russian army without compromising Shabbos or Kashrut.

The Steipler was not known for lengthy conversation. He had lost his hearing standing as a sentry on freezing Siberian nights during his tenure in the Czar’s army. People would write questions to him or beseech him to pray on behalf of the sick or unfortunate. The Steipler would read the note, hardly lift his eyes from the large volume on his old table, and would start to pray. He would often condense his advice into on or two sentences, but it would be potent. People asked, and he gave answers. Within days miraculous salvation came. And so did the people. They stood in lines outside his modest home, and the very old man would find the time to see anyone who walked in with the problems of the world bearing down on his or her shoulder.

An aspiring young man, whose quest was to be as great a scholar as the Steipler himself, came with a problem. The young man felt that this particular predicament was impeding his spiritual growth and surely a man like Rabbi Kanievski, who persevered in the face of life-threatening problems, could relate to his!

The young man had written the situation in detail for the Steipler to grasp its severity. “Every Friday,” wrote the young man, “I come home from Yeshiva, and the scene in the house leads me to despair. The table is not set, the kitchen is hardly clean, and the children are not bathed! What should I do? How can I concentrate on my studies when I have such problems?” The aspiring scholar expected the Steipler to advise him how to deal with a wife that was not keeping to his standard.

Rabbeinu Yonah of Girondi (1180-1263) explains the juxtaposition of the command to sweep ashes with that of the Korban Olah. A person must realize that sometimes what is considered menial work in human eyes merits the highest accord in Hashem’s eyes. The mitzvah of sweeping the Altar is prefaced with the word tzav and placed next to the Korban Olah. One must realize that the little, unglorified acts also yield great sanctity. In the quest for spirituality, one must never demean the simple chores. For no matter how holy one is, there is always room for a broom.