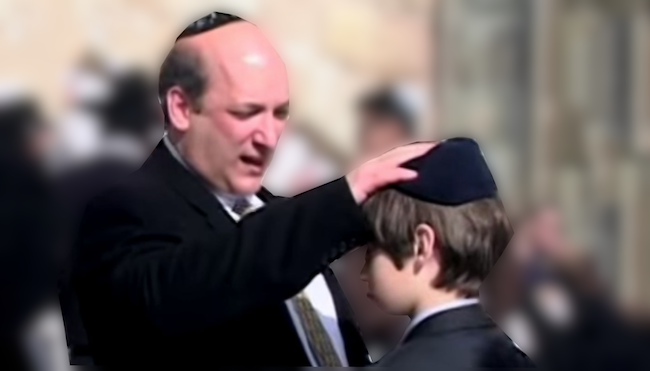 A Blessing on your Head, Mazel Tov Mazel Tov 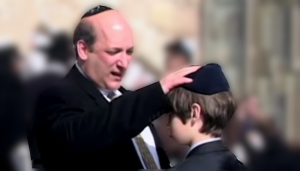 (Insights[1] from this week’s Portion: Vayechi)

REACH OUT AND TOUCH SOMEONE

It was the ultimate Jewish experience (or at least so it seemed at the time): overlooking the Old City of Jerusalem with the sounds of Tevya being pumped into my ears, through my cassette Walkman headphones! Yes, I am a long-time fan of “Fiddler” [2], as my cassette-era reference reveals. And while there are certain messages in this clever show that I am not 100% on board with, I feel that they are overshadowed by the soul-stirring songs that carry a unique knack for tugging at our Jewish kishkas. [3] When Zero Mostel (as Tevya) belts out his riveting rendition of “Sabbath Prayer”, for example, the sounds seem to have a direct hotline to my heart and an express shortcut to my Soul.

Perhaps it’s not surprising, then, that one of the most awe-inspiring memories during my adult exploration of Judaism is the first time I witnessed the blessing of children at a Shabbos table. [4] As I watched this transcendent interaction, I was powerfully stirred by its poignant beauty: in effect, the Parents of these young girls were reaching to the heavens on behalf of the people they loved most, bringing down Divine compassion in hopes that their children’s future would be imbued with success, goodness, and meaning. Now, Thank G-d, the beautiful custom is one that I benefit from weekly. Either my Parents bless me on Shabbos itself while placing their hands on my head, or they do so ahead of time by the other means available to “reach out and touch someone“, made possible by the phone company. [5]

BLESSINGS FOR THE BOYS

While Goldie & Tevya blessed their “five daughters” in “Fiddler”, in our Home, there are blessed boys for us to bless. [6] Each week we ask G-d to help them become like the Sons of Joseph – yes, the same righteous Joseph who looked “handsome” and “smart” in his “Technicolor Dreamcoat” [7] – Ephraim & Menashe. The custom of invoking these two great ancestors of our People actually comes from this week’s Portion. Joseph’s Father, the Patriarch Jacob, summons his Children to give them a final blessing from his deathbed. But first, Jacob requests the presence of two of his Grandchildren – Ephraim & Menashe – to receive blessings. Why would Jacob prioritize his Grandchildren over his Children? And in our times, WHY WOULDN’T WE ASK THAT OUR SONS BE LIKE THE PATRIARCHS ABRAHAM, ISAAC, & JACOB (which would parallel the blessing on behalf of Jewish daughters: that they should be like the matriarchs Sarah, Rebecca, Rachel, and Leah)? WHY EPHRAIM & MENASHE INSTEAD?

Perhaps first and foremost, we invoke the names of Ephraim & Menashe because we’re told they had brotherly love, in spite of the genuinely compelling reasons they had to be competitive. Moreover, this dynamic fraternal duo had nearly every temptation imaginable to contend with: they grew up in the morally depraved society of ancient Egypt; their Father Joseph was Egypt’s Viceroy, making them part of the Royal Family in a decadent culture (having to deal with fame, wealth, etc.); one of them became directly involved in Egypt’s government affairs, assisting Joseph in his leadership roles; etc. And yet, in the face of the ultimate challenges to assimilate and forfeit their integrity, Ephraim & Menashe were steadfast in their consistent loyalty to the G-d of Israel. So too, in all of our Exiles throughout history – even in countries that are not quite as spiritually toxic as ancient Egypt – we pray that our children will emulate Ephraim & Menashe, and will not be lured away from their People by the seductive appeal of “High Society” assimilation.

So why did Jacob prioritize his GRANDCHILDREN OVER HIS CHILDREN in offering his final blessings? As Rabbi Shraga Simmons writes, “Most creatures in the world have parent-child relationships – whether it is a mother lion protecting her cubs or a mother bird feeding her young. But only the human being has a concept of grandchildren, of perpetuation beyond a single generation. This is an effect of our spiritual soul which is rooted in infinity. Being a grandparent therefore connects us deeply to our uniqueness as human beings… Far more than children, it is grandchildren who reveal the foundation and future direction of a family line. Hence the popular saying: “The issue is not whether you have Jewish children, it’s whether you have Jewish grandchildren.‘” May we all be blessed to have Jewish grandchildren who will live their lives according to the path that was paved by Ephraim & Menashe!

1. Some of this week’s insights were inspired by and adapted from an article by Rabbi Shraga Simmons (of Aish.com), entitled “Blessings of Ephraim and Menashe”
2. “Fiddler on the Roof”, a well-known musical & movie
3. “Kishkas” roughly translates into “insides”
4. The Shabbos table of Marguerite & Ron Werrin, who graciously invited me into their home and exposed me to this beautiful and unforgettable custom
5. “Reach out and Touch Someone” was a slogan and ad campaign used by AT&T beginning in 1979
6. I had written this article before our beloved baby “Girl-baum” joined our Family! Thankfully, we now have the great privilege of blessing this precious little person with the Blessing over a DAUGHTER!
7. These lyrics (and title reference) are from the Broadway musical “Joseph and the Technicolor Dreamcoat”

Note: For a how-to guide on blessing the children, you can go to Aish.com