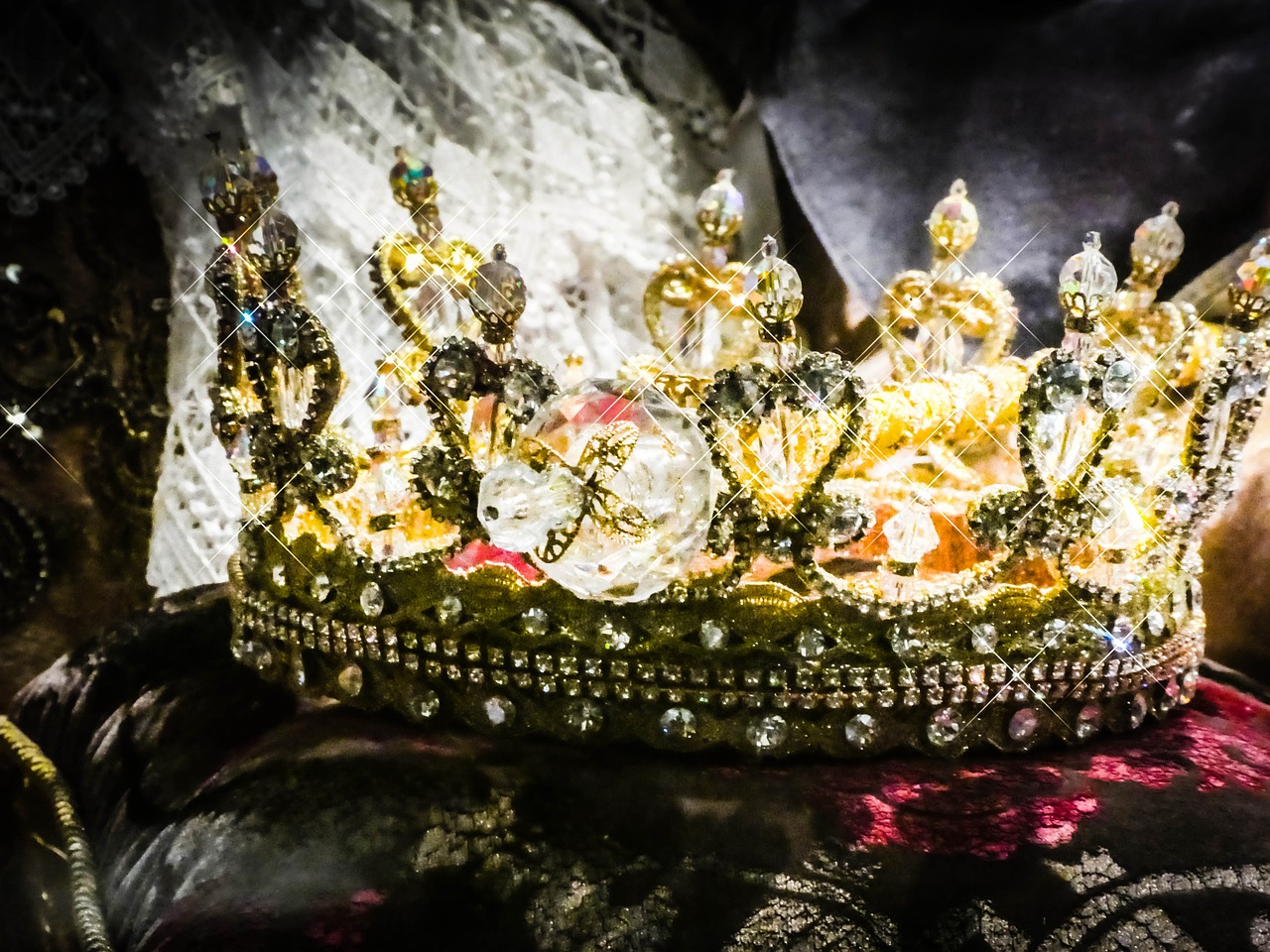 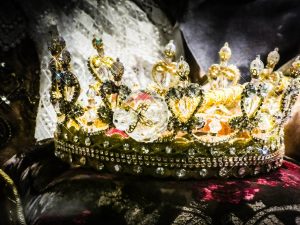 In the Rosh Hashanah prayers, we repeatedly proclaim Hashem as our King. Using a parable told (in a different context) by R’ Nosson Zvi Finkel z”l (1943-2011; Rosh Hayeshiva of the Mir Yeshiva in Yerushalayim), R’ Shlomo Naiman shlita (Baltimore) explained what we should take away from this fact:

A king was hiring a tutor for his son, and many candidates touted their expertise in different areas. The candidate who was ultimately hired claimed to be an expert in horses, diamonds, and human nature.

One day, the prince and his tutor attended a horse show. The prince saw a handsome and powerful-looking horse, and he wanted to buy it. “Don’t!” the tutor whispered. “It throws its riders.” Wanting to test the tutor’s claim, the prince asked the seller to ride the horse. Sure enough, the horse threw the seller. Grateful, the prince gave the tutor ten dollars.

Another day, the prince and his tutor attended a gem show. The prince saw a sparkling diamond, and he wanted to buy it. “Don’t!” the tutor whispered. “It’s a fake covered with a shiny veneer.” The prince tested the tutor’s claim by applying something sticky to the stone, and sure enough, the shiny coating of the diamond peeled off. Grateful, the prince again gave the tutor ten dollars.

Some time after, the prince said to the tutor, “You’ve shown your expertise in horses and diamonds. What about human nature?” asked the prince. “I hate to break this to you,” the tutor answered, “but you are not from the royal line; you’re a foster child.”

Furious, the prince ran to the king and repeated what the tutor had said. “It’s true,” the king admitted. “But how did you know?” he asked the tutor.

The tutor responded: “Each time the prince wanted to thank me, he gave me a mere ten dollars. He thinks small; he doesn’t think big like a real prince would.”

R’ Naiman continued: On Rosh Hashanah, we proclaim that Hashem is King. And, says the Torah (Devarim 14:1), we are Hashem’s children. It follows that we are princes, a fact that obligates us to “think big,” to expect more of ourselves, and to set higher goals for ourselves in the coming year than we might do otherwise. A true prince would do no less. (Heard from R’ Naiman 26 Elul 5777)

The Gemara (Yoma 28b) teaches: “Avraham Avinu kept the entire Torah, even Eruv Tavshilin” — the special preparation that must be done when Yom Tov (including Rosh Hashanah) falls on a Friday [see Artscroll Sidddur p.654]. Why does the Gemara single out Eruv Tavshilin as a Mitzvah that Avraham Avinu observed?

R’ Shimon ben Tzemach Duran z”l (Rashbatz; 1361-1444; Spain) explains: The Gemara (Beitzah 15b) explains the need for Eruv Tavshilin based on the verse (Shmot 20:8), “Remember the Sabbath day to sanctify it.” “Remember the Sabbath day!” when Yom Tov might make you forget it, i.e., when Yom Tov falls on Friday and you might be tempted to eat all of the food that you prepared on that day, leaving nothing for Shabbat [until here from the Gemara]. Rashbatz explains: The obligation to have a feast on Shabbat is greater than the obligation to have a feast on Yom Tov. Do not let the secondary feast preempt the primary feast.

Rashbatz continues: Avraham Avinu’s spiritual journey that ultimately lead to his recognizing Hashem spanned many years, beginning when he was three. When Avraham was 48 years old and Hashem “mixed-up” the languages of the builders of the Tower of Bavel, Avraham recognized once-and-for-all Hashem’s Hashgachah / direction of the world. Nevertheless, Avraham continued to believe for a time in the power of the zodiac. That belief was dispelled only when Hashem took Avraham outside and told him, “Gaze toward the heavens, and count the stars if you are able to count them!” And He said to him, “So shall your offspring be!” The Gemara (Shabbat 156a) explains: Hashem told Avraham, “Do you think you are under the control of the stars? You are not!” Do not let the secondary power of the zodiac obscure your recognition of the stars’ Creator, Who is the Primary Power, i.e., Hashem. This is the same message contained in the Mitzvah of Eruv Tavshilin–keep a proper perspective on what is primary and what is secondary; therefore, Avraham observed that Mitzvah meticulously. (Magen Avot: Introduction)

“Ask your father v’yaggedcha / and he will relate it to you; your grandfathers [literally, ‘elders,’ v’yomru lach / and they will tell you.” (32:7)

R’ Raphael Moshe Luria z”l (Rosh Yeshiva in several chassidic yeshivot in Israel; died 2009) writes: Torah received from one’s grandfather is qualitatively different than Torah received from one’s father. One difference is noted in our verse by the two verbs that are used. Rashi z”l (to Shmot 19:3) writes that the verb “Yaggid” connotes a harsher form of speech than the softer “Amar.” In this light, our verse can be read: Ask your father and he may relate it to you in a way that seems harsh; your grandfathers, and they will tell you the same thing, but gently. A father’s role requires that he sometimes present a stern face to his child, whereas a grandfather’s role is different–to transmit the Torah’s lessons gently.

The Gemara (Kiddushin 30a) states: “If one teaches his son’s son Torah, it is as if he received it from Har Sinai.” R’ Luria writes: The simple understanding of this statement is that, of course one should teach his own son, but, in addition, one should teach his grandson. However, that is not how the commentary Ha’makneh [by Rabbi Pinchas HaLevi Horowitz z”l (1731-1805; rabbi of Frankfort-on-the-Main, Germany)] understands the Gemara. He writes: Our Sages teach that learning a lesson from a fellow student is not the same as hearing it directly from the teacher. The reason is that, with each passing generation from the Giving of the Torah, our grasp of the Torah is decreased slightly. Thus, it is preferable to learn from one’s grandfather rather than one’s father, and doing so is, relatively speaking, like receiving the Torah from Har Sinai. In this light, concludes R’ Luria, we can have a new understanding of our Sages’ teaching that Hashem appeared to Bnei Yisrael at Har Sinai as an “old man,” i.e., He appeared as a grandfather. (Beit Genazi: Nisuin, Devarim Achadim)

“‘Is it not revealed to Me, sealed in My treasuries? Mine is vengeance and retribution at the time when their foot will falter, for the day of their catastrophe is near, and future events are rushing at them.’ When Hashem will have judged His people, He shall relent regarding His servants, when He sees that enemy power progresses, and none is saved or assisted.” (32:34-36)

R’ Yaakov Moshe Charlap z”l (rabbi of Yerushalayim’s Sha’arei Chessed neighborhood and Rosh Yeshiva of Yeshivat Merkaz Harav; died 1952) explains: Hashem has a secret. Our Sages teach that His judgment overlooks nothing (“Mine is vengeance and retribution”). Nevertheless, even if we hit rock bottom, Hashem will have a way to redeem us despite our sins (“He shall relent regarding His servants”). How both statements can be true is revealed only to Him, sealed in His treasury. (Mei Marom Vol. V.)

“Who, Kel, is like You, Who pardons iniquity and overlooks transgression for the remnant of His heritage?!” (Michah 7:18–in this week’s Haftarah)

The Gemara (Rosh Hashanah 17a) teaches: “‘The remnant of His heritage’ refers to someone who acts like a remnant, a leftover.”

R’ Kluger continues: The Gemara (Berachot 17b) states, “The entire world is sustained in the merit of My son Chananiah, while he is satisfied with a measure of carobs each week.” In Chananiah’s humility, he saw himself as the world’s “leftovers,” someone for whom the world had no use. Therefore, he preferred to take as little as possible from the world. In reality, though, he was the Tzaddik of the generation in whose merit the entire world was sustained. It is in the merit of such a “leftover” person, says our verse, that Hashem “pardons iniquity and overlooks transgression.” (Kohelet Yaakov: Shabbat Shuvah, Drush 1)