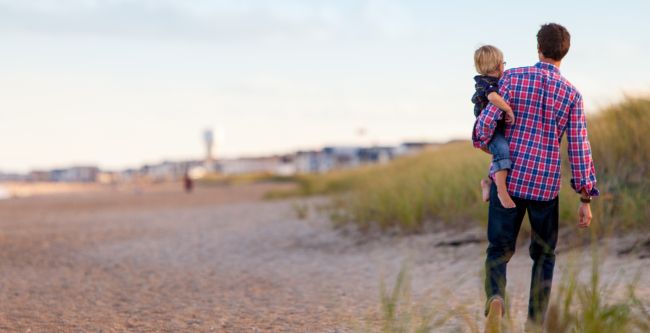 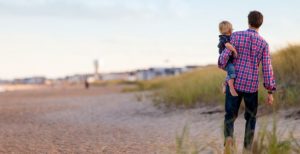 In this week’s haftarah, Hashem consoles the Jewish People: “Would a mother forget her nursling, refrain from feeling compassion for the child of her womb? Even were these to forget, I would not forget you.” R’ Naftali Hertz Landau z”l (late 19th century; rabbi of Strelisk, Galicia) explains:

There are two types of feelings that parents have for their children. When the children are helpless youngsters, parents feel “blind” love, loving the children because they are extensions of the parents. As children grow older, especially after they marry and move away, the relationship changes, as some of the blind love of former years is replaced by pride in the children’s accomplishments or, G-d forbid, disappointment at the children’s failures. Often, a certain distance grows between the parents and adult children at this stage.

These two relationships exist between Hashem and the Jewish People as well, as we read (Yirmiyah 31:19): “Is Ephraim My most precious son or a delightful child?” “Ephraim”–the Jewish People–is at times a “delightful child,” beloved just for the delight a parent feels at having children, and at times a “precious son,” valued for his accomplishments. Similarly, Hashem says in our verse: Would a mother forget her nursling? Does she fail to have compassion for the child of her womb (a reference to older children)? Likewise, in either state, I will not forget you! (Ahavat Zion p.89)

“This shall be the reward when you listen to these ordinances, and you observe and perform them: Hashem, your Elokim, will safeguard for you the covenant and the kindness that He swore to your forefathers. He will love you, bless you and multiply you, and He will bless the fruit of your womb and the fruit of your Land, your grain, your wine, and your oil, the offspring of your cattle and the flocks of your sheep and goats, on the Land that He swore to your forefathers to give you.” (7:12-13)

R’ Yisrael Ze’ev Halevi Horowitz z”l (1778-1861; rabbi of Sátoraljaújhely (“Uhel”), Hungary; later settled in Teveryah, Eretz Yisrael) asks: These verses imply that if we observe and perform the Mitzvot, then Hashem will keep his promise to the Patriarchs. Doesn’t Hashem have to keep His promise anyway, just because He made a promise?

He answers: These verses should be read to say that if we observe the Mitzvot, then Hashem will love us, bless us, etc., i.e., He will give us all of the material blessings described in the second Pasuk above. As for His promise to the Patriarchs, He will “safeguard” it, i.e., He will store it away to reward us in the World-to-Come.

On the other hand, R’ Horowitz continues, if we do not observe the Mitzvot, Hashem will still provide for us in this world. Since we will be undeserving, however, He will have to draw upon His promise to the Patriarchs to justify that kindness. In that case, He will not be able to “safeguard” His promise to be drawn upon in the World-to-Come. (Lakachat Mussar)

“You might say in your heart, ‘My strength and the might of my hand made me all this wealth!’ Then you shall remember Hashem, your Elokim–that it was He Who gave you strength to make wealth . . .” (8:17-18)

Rabbeinu Nissim ben Reuven z”l (Spain; 1320-1376) writes: The Torah is not telling a person to deny that he is endowed with strengths that he can use to accomplish different ends. If the Torah wanted a person to deny his own talents, our verse would have said, “You shall remember Hashem, your Elokim, who makes wealth.” But, that is not what the verse says. Rather, it instructs a person to remember that, if he has talents–for example, a talent for making money–it was Hashem who gave him those talents; “that it was He Who gave you strength to make wealth.” (Derashot Ha’Ran 10)

The Aramaic translation Onkelos renders this phrase: “He gives you the idea to acquire assets.”

R’ Itamar Schwartz shlita (Yerushalayim) writes: Imagine that a person buys a house and the house later doubles in value. Many people would pat themselves on the back for making such a wise investment. “No!” says our verse, as explained by Onkelos. “You contributed nothing to your success. Not only did the money to buy the house come from G-d, even the very idea to buy the house came from G-d.” (B’lvavi Mishkan Evneh Vol. II p.205)

“Then you shall remember Hashem, your Elokim–that it was He Who gave you strength to make wealth . . .” (8:18)

R’ Avraham Yitzchak Hakohen Kook z”l (1865-1935; first Ashkenazic Chief Rabbi of Eretz Yisrael) writes: A person can come to a greater recognition of Hashem through working for his sustenance than he can by having his sustenance delivered to him through a dramatic miracle. In the latter case, there is only one opportunity for inspiration; it may be dramatic, but it is soon over and done with. In contrast, when a person works for his sustenance and constantly takes note of the numerous ways in which things surprisingly fall into place, he will never stop noticing Hashem’s Hand. (Ein Ayah: Berachot 1:143)

The Gemara (Bava Kamma 41b) teaches: Rabbi Akiva explained that this verse instructs us to cling to Torah scholars.

R’ Yaakov Moshe Charlap z”l (Rosh Yeshiva of Yeshivat Merkaz Harav; died 1952) observes: Rabbi Akiva doesn’t mean that clinging to a Torah scholar is the next best thing to clinging to Hashem. A true Torah scholar nullifies himself completely before G-d; his ultimate goal is to feel as if he has no existence independent of G-d. Thus, when one clings to a Torah scholar, he is actually clinging to G-d Himself.

In addition, R’ Charlap writes, Rabbi Akiva is teaching another lesson. The only way to cling to Hashem is by clinging to a Torah scholar. This is demonstrated by the fact that as soon as Bnei Yisrael loosened their connection to Moshe (thinking that he was not returning from Har Sinai) they immediately fell to the level of making the Golden Calf. (Mei Marom V p.272)

“In order to prolong your days and the days of your children upon the Land that Hashem has sworn to your forefathers to give them, like the days of the heaven over the earth.” (11:21)

The Gemara (Sanhedrin 90b) cites this verse as one of the allusions in the Torah to Techiyat Ha’meitim / resurrection of the dead. The Gemara explains: It is not written, “The Land that Hashem has sworn to your forefathers to give you,” but rather, “To give them.” This indicates that the Patriarchs will one day receive Eretz Yisrael, which necessarily indicates that there will be Techiyat Ha’meitim.

R’ Yehuda Gruenwald z”l (1845-1920; rabbi of Satmar, Hungary) writes: In light of this, we may interpret the end of the verse (“like the days of the heaven over the earth”) as follows: Just as a person receives reward in “heaven”–i.e., in the World of the Souls–after his death, so he will receive reward on “earth” after his death, i.e., when his body and soul are reunited at the time of Techiyat Ha’meitim. (Shevet Mi’Yehuda)

“Tziyon said, ‘Hashem has forsaken me; my Master has forgotten me’.” (Yeshayah 49:14 – the opening verse of this week’s Haftarah)

Is “Tziyon” the same place as Yerushalayim?

R’ David Kimchi z”l (Radak; Spain; 1160-1235) appears to understand that “Tziyon” is Yerushalayim. He writes in his commentary to our verse: “The prophet mentions ‘Tziyon’ as if the city is bemoaning that its children were exiled. Not only its residents, but all of the Jewish People are its children, for they used to make pilgrimages there to serve Hashem.”

R’ Elazar Azkari z”l (1533–1600; Eretz Yisrael) understands that they are not the same place. He writes in Sefer Chareidim (end of chapter 52, discussing the handling of tithes in the present day, when the Bet Hamikdash is not standing): “Within Yerushalayim, Ma’aser Sheni [the ‘second tithe,’ which is required to be eaten in Yerushalayim] may not be redeemed. If one is able to take the Ma’aser Sheni to Tziyon and redeem it there, even for a token amount, he may.”

R’ Yechiel Michel Tukachinsky z”l (1872-1956; Yerushalayim; author of Gesher Ha’chaim on the laws of mourning, and other works) writes: “It always was obvious to me that “Tziyon” and Yerushalayim are one and the same. Therefore, I was very surprised to find that three of our sages distinguish between them.” [One of the three is the Sefer Chareidim just quoted.]

R’ Tukachinsky continues: The viewpoint of those three scholars is difficult to reconcile with the Tosefta and Talmud Yerushalmi, which both state: “We do not permit tombs to exist within Yerushalayim except for the tombs of the kings from the House of David and the tomb of the prophetess Chuldah, which were in Yerushalayim.” This indicates that King David was buried in Yerushalayim. Yet we read that King David was buried in the City of David (Melachim I 2:10), which is referred to also as the “Citadel of Tziyon” (Shmuel II 5:7). Thus, “Tziyon” and Yerushalayim are one! If they are not synonymous, Tziyon is at least a neighborhood of Yerushalayim, as many verses prove. (Ir Ha’kodesh Ve’ha’mikdash 17:3)