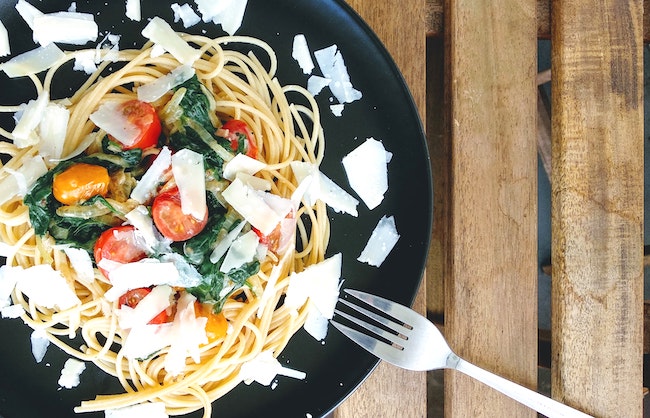 What’s In Your Food? 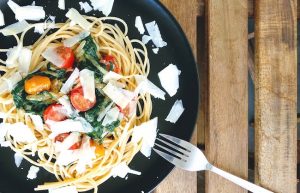 This week’s double Parashah begins with the laws of vows, whereby a person designates something–for example, a particular food–that is otherwise permitted as prohibited to him by a vow. Effectively, that food or other object takes on the status of Hekdesh / something sanctified to the Temple vis-á-vis the vow-taker and becomes prohibited to him.

Why are such vows effective? R’ Avraham Zvi Kluger shlita (Chassidic Mashpia in Bet Shemesh, Israel) explains, based on the writings of R’ Shneur Zalman of Liadi z”l (1745-1813; first Chabad Rebbe; known as the Ba’al Ha’Tanya): From the fact that products of the inanimate, plant, and animal kingdoms can sustain a human being, we can conclude that their “root” in Heaven is loftier than man’s own. Only because we live in an upside-down world did those lofty “lights” fall to the lower levels of creation.

Why would someone take a vow not to eat a particular food? Typically, because he feels that his desire for that food is pulling him downward, making him feel materialistic and not spiritual. On the other hand, when he prohibits that food through a vow, making it “like Hekdesh” (and, likewise, when a person sanctifies something as a Korban / sacrificial offering), he is, in effect, uncovering that thing’s hidden sanctity. That is why one of the verbs that the Torah uses in connection with vows is “Yafli”– related to “Peleh” / “ a wonder,” i.e., something whose essence is hidden. (Pela’ot Edotecha)

“Take vengeance for Bnei Yisrael against the Midianites; afterward you will be gathered unto your people.” (31:2)

R’ Yitzchak Arieli z”l (1896-1974; Mashgiach Ruchani of Yeshivat Merkaz Harav and author of the Talmud commentary Enayim La’mishpat) writes: Knowing that he would die after this war, Moshe easily could have delayed, rationalizing that Bnei Yisrael grow so much every day that he is their leader. However, to Moshe, no rationalization could supersede Hashem’s command. Thus, as we read in verse 3, Moshe actually encouraged Bnei Yisrael to hurry out to war. (Midrash Ariel)

R’ Noach Rabinowitz z”l (1839-1901; rabbi of several towns in Belarus) writes: Throughout this chapter, we read that the tribes of Reuven and Gad, and only those two tribes, asked, and negotiated with Moshe, to receive their inheritance in the Transjordan region, i.e., east of the Jordan River. Why, suddenly (in verse 33), do we read that half of the tribe of Menashe also received its share in the Transjordan region?

R’ Rabinowitz explains: Reuven was Yaakov’s firstborn and, as such, should have received a double portion in Eretz Yisrael. However, Yaakov took the privileges of the firstborn away from Reuven and gave them to Yosef, the firstborn of Rachel. As the “firstborn,” Yosef received two shares in the Land: one to be taken by Ephraim and the other by Menashe. Note that Ephraim was Yosef’s younger son, but Yaakov declared that he would receive the privileges of Yosef’s firstborn. Thus, it was Menashe who was receiving the “second” share that now belonged to Yosef.

However, when Reuven took his share in the Transjordan region, a question arose: Where was Reuven’s second share (which now belonged to Yosef)? Was Reuven taking his “regular” share on the east bank, but not his second share, or were both shares in the Transjordan? Because of this doubt, the tribe of Menashe, which was inheriting Reuven’s “second” share (through Yosef) was split in two–one half on the east bank and the other on the west bank. (Toldot Noach p.210)

“The children of Gad and the children of Reuven came and said to Moshe, to Elazar the Kohen, and to the leaders of the assembly, saying, ‘Atarot and Divon and Ya’azer and Nimrah and Cheshbon and El’aleh and Sevam and Nevo and Ve’on–the land that Hashem defeated before the assembly of Yisrael–it is a land for livestock, and your servants have livestock’.” (32:2-4)

Why did they catalog the cities in the territory they were requesting? R’ Shaul Lowenstam z”l (1717-1790; rabbi of Amsterdam) explains:

The Gemara (Sotah 34b) states that the land of Moav is inferior for planting. Therefore, when we saw these cities, said the tribes of Gad and Reuven, we wondered why Hashem had given them to the Jewish People. Then we realized: “It is a land for livestock.” And, we, “your servants[,] have livestock!” (Binyan Ariel)

R’ Shlomo Zalman Ehrenreich z”l (1863-1944; Simlau, Hungary) comments: Originally, the holiness of Eretz Yisrael was limited to the west bank of the Jordan. But, after Bnei Yisrael conquered the lands of Sichon and Og, the holiness of Eretz Yisrael “crossed” the Jordan to the east bank also. Thus, the inheritance of the tribes of Reuven and Gad “came to them” on the east bank. (Quoted in Otzrot Tzaddikei U’geonei Ha’dorot)

“Then Aharon the Kohen went up to Mount Hor at the word of Hashem and died there, in the fortieth year after Bnei Yisrael went out of the land of Egypt, in the fifth month on the first of the month.” (33:38)

R’ Avraham Dov Auerbach shlita (Chief Rabbi of Teveryah, Israel) notes that this is the only occasion on which the Torah mentions the date of someone’s death. Why is this date significant?

He explains: Midrash Eichah Rabbah states on every Tisha B’Av while Bnei Yisrael were in the desert, 15,000 of Bnei Yisrael would pass away (so that over the 40 years, all 600,000 adult males who had left Egypt would die, as Hashem had vowed). But, in the final year, Hashem granted clemency to the last 15,000, and none died.

Why was this so? Later in our Parashah, we read that one who was sent to exile in an Ir Miklat / City of Refuge is paroled when the Kohen Gadol dies. Here, too, explains R’ Auerbach, the last 15,000 of the generation that left Egypt were given a reprieve from their exile and allowed to enter Eretz Yisrael because Aharon, the Kohen Gadol, had died nine days before Tisha B’Av, when they should have died. Thus, the date of Aharon’s passing is particularly significant. (Pitchei Avraham)

R’ Nachman of Breslov z”l (1772-1810) taught: There are 48 words in the first section of Kri’at Shema, which contains the foundation of our belief–six in the first sentence and 42 in the paragraph beginning “Ve’ahavta.” Paralleling this, there are 48 cities of Levi’im–six Cities of Refuge and 42 other cities. Our Sages teach that all 48 cities can provide refuge to a person who kills accidentally. Similarly, says R’ Nachman, Kri’at Shema provides refuge to one whose Emunah–the essence of life–is at risk.

He continues the analogy: From the fact that the Torah sends the accidental killer to the cities of the Levi’im to be rehabilitated we can learn that one whose Emunah needs rehabilitating should travel as well–in his case, to a tzaddik. (Likkutei Halachot: Hilchot Techumin 5:37)

The earliest (known) work offering a systematic presentation of Jewish beliefs is “Ha’nivchar Ba’emunot V’de’ot” / “The Choicest of the Beliefs and Understandings,” better known simply as “Ha’emunot V’de’ot,” by R’ Saadiah Gaon z”l (882-942; Egypt, Eretz Yisrael and present-day Iraq). In this excerpt from R’ Saadiah’s introduction to that work, he explains the word “De’ah” (singular of “De’ot”) found in the book’s title:

It is appropriate that we explain what “De’ah” is. It is something that is pictured in the soul, each thing as it is, in whatever conditions it is found. When the examination of that “thing” is completed, and the conclusions from that examination are absorbed into the soul and become part of it, then a person possesses “De’ah” regarding that thing for as long as he retains that understanding . . .

De’ah can be of two types: true or false. De’ah which is true means knowing the thing as it is–if it is big, small, black, white, present, absent [etc.] . . . De’ah which is false means knowing it as it is not–believing that large is small, small is large, white is black, black is white, present is absent, absent is present [etc.] A praiseworthy wise person is one who makes the truth of things his foundation. Through his wisdom, he holds on to that which one should hold on, and avoids that which one should avoid. On the other hand, a mind that should be condemned is one that makes its own understanding of things its foundation and imagines that the truth will be according to one’s own understanding. Through his foolishness, he holds on to that which one should avoid, and avoids that to which one should hold on.

[R’ Saadiah provides a concrete example:] In this connection, I will mention my wonder at people, who are slaves [to G-d], yet they think they have no Master. They think that what they deny will cease to exist, and what they acknowledge will exist. They are drowning in the depths of foolishness and have reached the point of no return! Let a pauper imagine he has a chest full of treasure and see what he gains. . . It is absolute foolishness for people to think that, if they imagine that there is no Master, then they will gain exemption from His Mitzvot, His warnings, His promises, His threats, and the like.