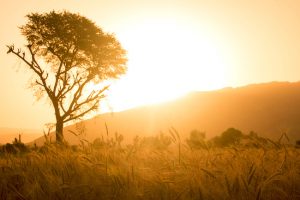 R’ Feivel Meltzer z”l (1897-1973; Israeli educator, known in particular for his writings and radio programs that popularized the study of Tanach; son of R’ Isser Zalman Meltzer z”l) writes: With this week’s Parashah, we jump forward in time to the end of the forty years in the desert, from the era of the Exodus to the era of settling Eretz Yisrael.

The Parashah’s first section–the Parah Adumah / red heifer–continues describing the role of the Kohanim, which was reaffirmed anew after Korach’s mutiny. In this section, we are still standing near the beginning of the forty years. The remainder of the Parashah, however, takes place in the last year of Bnei Yisrael’s sojourn in the desert. [Perhaps this is why Rashi z”l asks: “Why is the section narrating the death of Miriam placed immediately after the section discussing the Parah Adumah?”] At the end of the Parashah, Bnei Yisrael are literally standing on the threshold of Eretz Yisrael.

R’ Meltzer continues: The Torah does not dwell on the drawn-out passing of the great Generation of the Exodus. But, this Parashah does relate the passing of two of the three great leaders of that generation: Miriam and Aharon. (The third, Moshe, continues to lead until the end of the forty years.) Aharon’s passing is described simply, without drama, but the tragedy of the moment is captured by a very deep Midrash, which relates: “Hashem said to Moshe, ‘I do not have the heart to tell Aharon that his time has come. Please tell him for Me’.”

R’ Meltzer concludes: It is a new morning. Even the Canaanite kings Og and Sichon cannot stand in the way of Bnei Yisrael’s march to the Holy Land, as the end of the Parashah relates. (Parashat Ha’shavua V’haftaratah)

“Bnei Yisrael, the whole assembly, arrived at the Wilderness of Tzin in the first month and the people settled in Kadesh. Miriam died there and she was buried there. There was no water for the assembly, and they gathered against Moshe and Aharon.” (20:1-2)

R’ Eliyahu Hakohen Ha’itamari (Darshan / preacher and prolific author in Izmir, Turkey; died 1729) writes: Possibly, a reason why Bnei Yisrael lacked water after Miriam died was, Middah-K’negged-Middah / measure-for-measure, because they failed to cry over Miriam’s death. [The Torah does not mention that Bnei Yisrael mourned for her, in contrast to when Aharon died.]

He continues: This would explain why the next section of the Parashah relates that Moshe hit the rock, and death was decreed on Moshe and Aharon. We read (Yeshayah 57:1), “The Tzaddik perishes, and no one takes note; pious people are taken away, and no one gives any thought that because of evil the righteous are taken away.” The Gemara (Sanhedrin 113b) teaches, based on this verse, that when one Tzaddik passes away and the community fails to take notice, additional righteous people will pass away as a consequence, G-d forbid. (Semuchin La’ad)

“Moshe and Aharon gathered the congregation before the rock and he said to them, ‘Listen now, you Morim / rebels, shall we bring forth water for you from this rock?’” (20:10)

Rabbeinu Nissim z”l (“Ran”; Spain; 1290-1380) writes: Moshe Rabbeinu was punished for these words because he generalized in criticizing Bnei Yisrael. It’s true that the individual Jews whom he was addressing were “Morim” / “rebels.” However, our Sages say that one should be in awe of any Tzibbur / assembly of Jews. Jews as a group can never be labeled by a derogatory term, for even if the individuals in the group lack redeeming qualities that others in the group possess, the group as a whole is always greater than the sum of its parts. Even if one is himself an intentional sinner, if he is part of a gathering that is serving Hashem, the group is enhanced because that sinner is part of it.

How so? Our Sages find a precedent in the Ketoret / incense in the Temple, which had one foul-smelling spice in it–the Chelbenah. The Ran says that this spice served to “awaken” the fragrance of the other spices [presumably through a chemical reaction]. Similarly, when people with different strengths and weaknesses get together, they awaken previously dormant positive traits in each other.

However, the Ran continues, this is true only if the group is not made up entirely of like-minded Resha’im / wicked people. If all the members of the group have exactly the same bad traits, then they merely strengthen each other’s wickedness. (Derashot HaRan: Drush No. 1)

“Moshe and Aharon gathered the congregation before the rock and he said to them, ‘Listen now, [you] rebels! Shall we bring forth water for you from this rock?’ . . . Hashem said to Moshe and to Aharon, ‘Because you did not believe in Me to sanctify Me in the eyes of Bnei Yisrael, therefore you will not bring this congregation to the Land that I have given them’.” (20:10, 12)

R’ Moshe ben Maimon z”l (Rambam; 1135-1204; Spain and Egypt) writes: When it comes to character traits, the correct path that a person should choose in nearly all cases is the middle of the road. In this way, his soul will acquire a good nature, and he will get along with people. This is what the Mishnah (Avot 2:1) describes as a path that “brings glory to the one who does it, and [which brings] glory to him from mankind.”

He continues: Hashem told Moshe that he failed to sanctify G-d’s Name. His sin, Rambam writes, was deviating from the middle of the road toward one extreme–anger. Hashem was very exacting with Moshe, because a person such as Moshe should not have expressed anger toward Bnei Yisrael. When a person expresses anger inappropriately–in particular, a person from whom others learn how to achieve success in this world and the next–that causes a desecration of G-d’s Name. (Shemoneh Perakim ch.4)

In yet another place, Rambam writes: When Moshe Rabbeinu requested (Shmot 33:13), “Make Your way known to me,” he was asking to know the Names that describe how Hashem acts, for when one knows Hashem’s ways, he knows Him. In response, Hashem taught Moshe the descriptions: giving, compassionate, holy, etc. (Moreh Nevuchim I ch.54)

R’ Ephraim Kirschenbaum shlita (rabbi in Bet Shemesh, Israel) writes: R’ Moshe ben Nachman z”l (Ramban; 1194-1270; Spain and Eretz Yisrael) challenges Rambam’s understanding of Moshe’s sin because it seems to ignore that the Torah accuses Moshe of a lack of Emunah / belief in Hashem. However, taking the three above teachings of Rambam together, we can defend Rambam and say: Failing to walk in Hashem’s ways, to emulate Him, is considered a failure to “know” Him, which, in turn, represents a failure of Emunah. (Huyedot Aharon p.116)

R’ Shimshon Dovid Pincus z”l (rabbi of Ofakim, Israel; died 2001) writes: “Shav’ah” is a cry for mercy. It involves asking forcefully that G-d respond to one’s troubles or provide what one is lacking. It refers to a plea about something that is very significant or about a situation that is very bitter. Shav’ah can even rise to the level of hysteria.

“Bakashah,” an ordinary request, is not one of the thirteen types of prayer identified in the Midrashim, R’ Pincus notes. This is because, in reality, most of the things for which we ask are very important; they require impassioned requests, such as through Shav’ah. For example, we pray for sustenance, which is an awesomely important matter. Without sustenance, a person is at greater risk of sinning, as we read (Mishlei 30:9), “Lest, being impoverished, I take to theft, and profane the name of my Elokim.” Most people can cope with having a lower quality of food, but when a person has debts and bills that he cannot pay, he is liable to steal, cheat, fight, borrow with interest, and, ultimately, desecrate G-d’s name. We pray for children, which represents our eternity. We pray for health, on which our entire ability to serve Hashem depends.

R’ Pincus concludes: When a person prays to Hashem, he needs to appreciate what he is asking for and how much he really needs it. Asking for something that is “nice to have” is a very different experience from asking for something that is a matter of life or death. If one cries out to Hashem with the feeling that he truly needs what he is requesting, that itself can be a reason why Hashem should answer him. (She’arim B’tefilah p.36)