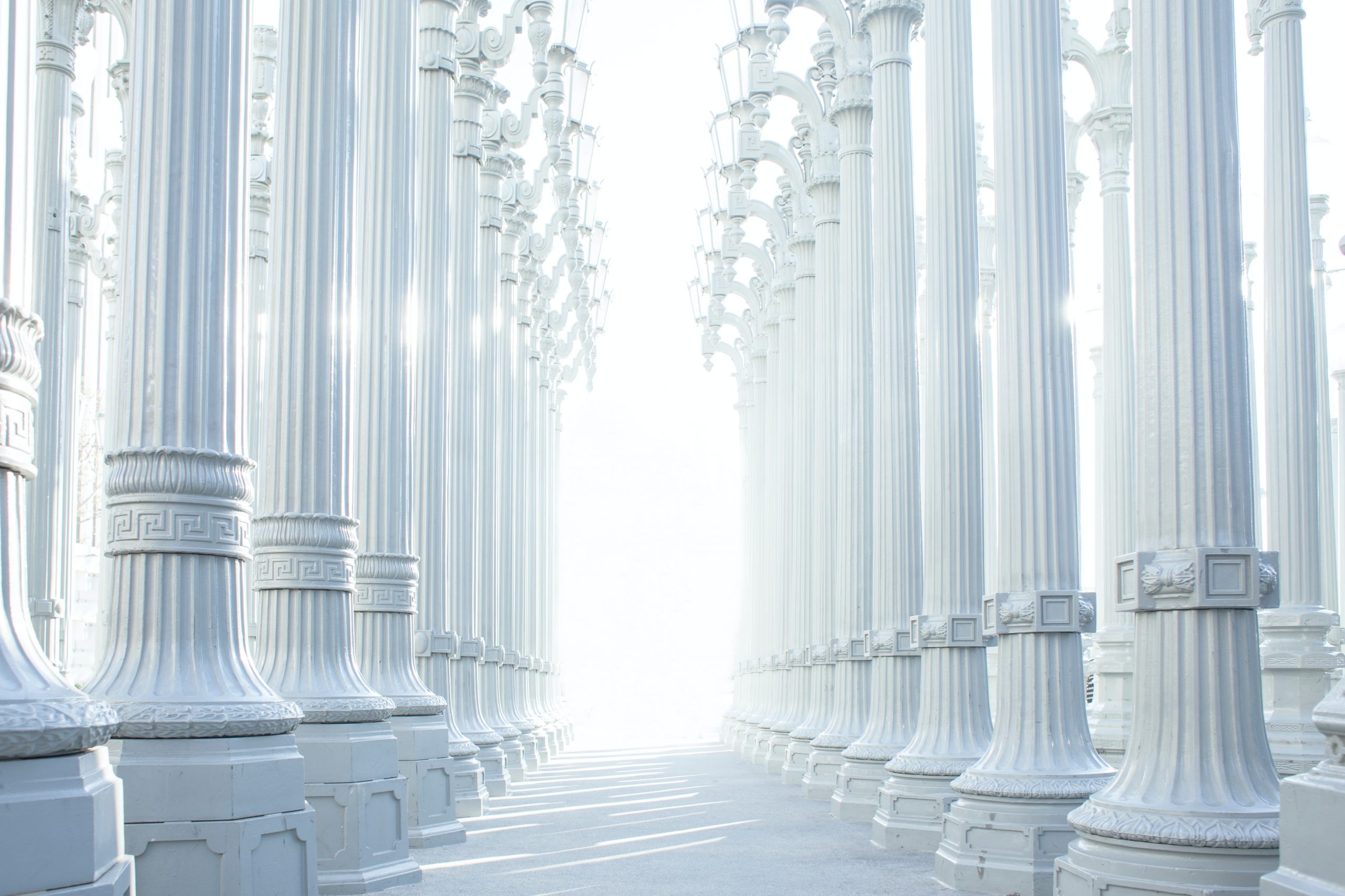 What Holds Up the World 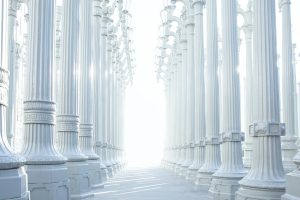 In loving memory of our mother Fruma bas Ephraim, Florence Rosenthol, on her yahrtzeit Chodesh Elul. – Arthur and Sandie Rosenthol

The Parashah opens with the pillar of Din (16:18): “Judges and officers you shall appoint in all your cities . . .” Also included are the Mitzvot to obey the Sanhedrin and to punish a Zaken Mamrei / a rebellious elder, i.e., a member of the Sanhedrin who continues to propound his own minority opinion after he has been outvoted by his colleagues. The Mitzvah to appoint a king falls within this category, as well.

The pillar of Emet includes the prohibitions against witchcraft and divination, as well as the Mitzvah to not listen to a false prophets. Instead, we are commanded to listen to true prophets.

The pillar of Shalom applies even in war, as we read (20:10), “When you draw near to a city to wage war against it, you shall call out to it for peace.” The commandment to completely eradicate the Canaanite nations also brings peace, for eliminating those who anger Hashem brings tranquility to the world.

[R’ Horowitz continues, showing where the other three pillars are found in the Parashah as well.] (Sh’nei Luchot Ha’brit)

Many commentaries ask: From these verses, it seems that there is a Mitzvah to appoint a king over Yisrael. Indeed, the Gemara (Sanhedrin 20b) states this explicitly. Yet, when the Jewish People asked the prophet Shmuel to give them a king, he responded (Shmuel I 10:19), “Today you have rejected your Elokim who delivered you from all your troubles and calamities, and you said to Him, ‘Set up a king over us!’”

R’ Avraham Yitzchak Hakohen Kook z”l (1865-1935; first Ashkenazic Chief Rabbi of Eretz Yisrael) explains: The Jewish People have both spiritual and material needs, and they require leadership that addresses both areas. In addition to Torah scholars, a great nation such as the Jewish People requires everything that makes a society function: scientists, tradesmen, craftsmen, etc. This brings honor to the Creator, for He is the one who gives man the intelligence to understand and build the world around him.

The question arises, R’ Kook continues: Should the Jewish People have only one leader, or should they have two leaders–one to be responsible for their spiritual needs and a second to address their material needs?

He answers: Were Hashem revealed in the world as is meant to be, man would understand that everything in the world exists because of Hashem’s Will and solely to serve Him. Then, man would not view his material needs as antagonistic to, or competing with, the Torah, nor as something that needs to be subjugated to man’s spiritual life. Rather, in the ideal world, we would recognize that both are one, for nothing exists except His Will. Our physical needs would be full participants in our spiritual lives. In that scenario, we would have only one leader–like Moshe Rabbeinu, who cared for both the spiritual and the physical needs of the nation.

Unfortunately, R’ Kook continues, we are not on that level, nor will we be again until the arrival of Mashiach. The Gemara (Sanhedrin 94a) teaches that Hashem wanted to make King Chizkiyah Mashiach, but He did not, because Chizkiyah did not sing Hashem’s praises at the downfall of the Assyrian king Sancheirev. R’ Kook explains: Chizkiyah did not view this physical victory as worthy of spiritual song, and, this failure to see the physical and the spiritual as one disqualified him from being Mashiach.

[The Torah’s idea of a king is one like Mashiach, who will teach that all aspects of Creation exist for the service of Hashem, there being no conflict between the physical and the spiritual. In contrast, when the Jewish People asked for a king, they were looking only for a military leader, someone to direct their material lives. That was what angered Shmuel.] (Otzrot Ha’Rayah II p.179)

[Though this verse is a rhetorical question, implying that a tree is not a man–therefore, you should not destroy it in battle–the prophets (as in Yirmiyah 17:6), the Mishnah (Avot ch.3), and works of Drush / homiletics and Mussar / character improvement contain many lessons that are based on equating people and trees.]

R’ Yitzchak Arama z”l (Spain; died 1494) writes: Fruit trees have many parts, each with its own purpose and character. There is the trunk, which is planted in the earth and close to it. Then there are the branches that extend this way and that way into the air. Lastly, there is the fruit.

Likewise, a person has a “trunk”–the physical body that “ties” him to the earth and is the seat of his physical powers, his character, and his nature, and with which he performs all of his actions, including Mitzvot. Then there are the intellectual wisdoms that send forth feelers (branches) in this direction and that direction, investigating all that exists. Lastly, there is the fruit, which is recognition of G-d and true Emunah / belief in Him.

Pirkei Avot (ch.3) teaches: If one’s wisdom is greater than his actions, he is like a tree who branches are heavier than its trunk–a strong wind will uproot it and blow it over. R’ Arama explains: Having a solid foundation does not guarantee that one will attain wisdom or Emunah. However, the Mishnah is teaching, without a solid foundation, it is impossible to climb to greatness.

There are several reasons for this, R’ Arama continues: If one’s character is flawed, it will usually distract him from attaining wisdom, and, certainly, Emunah. Also, if one cannot perfect that which comes easily, almost from habit, how can he perfect that which takes hard work?

However, R’ Arama concludes, the above is true only under the “natural order.” In contrast, the nation that received the Torah at Har Sinai is like an upside down tree, whose roots and trunk are in the Heaven. Thus, a Jewish child is taught Emunah (i.e., to recite “Shema Yisrael”) as soon as he can speak (Sukkah 42a). A Jew’s Emunah is not the end result of his development and his intellectual investigations; rather, it is the beginning, from which intellectual accomplishment, character development, and Mitzvot follow. Only with this world view can certain incidents in Tanach be understood, writes R’ Arama–for example, Avraham taking his son Yitzchak to offer him as a sacrifice, or Yaakov forcing Esav to sell his birthright when he was starving. From the perspective of human reason, these acts seem cruel. Likewise, though “compassion” is viewed by both G-d and man as one of the highest virtues, King Shaul lost his throne precisely because he showed compassion to Amalek–a result that shocks man and cannot be understood except through the prism of the Torah. (Akeidat Yitzchak: Bereishit 27)

R’ Avraham Dov Auerbach z”l (Chief Rabbi of Teveryah, Israel, who passed away this week) writes: The Gemara (Yoma 22b) teaches that King Shaul hesitated to destroy Amalek because he understood the Torah to demand compassion. Logically, he was correct, but the Torah decrees otherwise. Our Sages teach that one who is compassionate to cruel people will, ultimately, be cruel when compassion is in order. On the other hand, one who follows the Torah will be protected by the Mitzvah he has performed. (Pitchei Avraham)

This year, we will iy”H devote this space to discussing various aspects of our prayers. This week, we continue discussing the different types of prayer identified in Midrashim.

R’ Shimshon Dovid Pincus z”l (rabbi of Ofakim, Israel; died 2001) writes: “Pilul” is the root of “L’hitpalel,” the verb for prayer in general. In the Torah, this verb appears in two other contexts: “Judgment,” as in (Shmot 21:22), “He shall pay it B’flilim / by order of judges,” and “connection,” as in (Bereishit 30:8–spoken by Rachel), “Naftulei / Sacred schemes have I maneuvered to equal my sister,” which Rashi z”l interprets to mean: “I have been joined to my sister to merit the privilege of having children.”

R’ Pincus elaborates: It requires little explanation why all forms of prayer would be referred to as “connection.” The essence of prayer is connecting one’s thoughts and feelings to G-d.

R’ Pincus continues: One can develop a connection with Hashem through prayer in two ways. One is by speaking directly to Him at any time. The second is during the recitation of Shemoneh Esrei. Our Sages refer to reciting Shemoneh Esrei as “standing before the King.” This is not just a feeling; it is a literal reality. When we begin Shemoneh Esrei, Hashem “makes Himself available” to listen to us. This is an immense kindness on His part, but it obligates us to take advantage of the opportunity and make the effort to connect with Him. This, in turn, requires Emunah / faith that He really is listening and that He desires our prayers.

How is prayer like “judgment”? R’ Pincus explains: The goal of judgment is truth. Prayer is an exercise in acknowledging the truth–specifically, that the only Being that is “true”–in the sense that He is necessary and unchanging–is Hashem. (In a philosophical sense, our own existence is not “true,” because we are not necessary; Hashem can exist without us. In contrast, Hashem is “true” because without Him there would be no existence.) When one reflects on this “truth,” he recognizes his own obligation to praise Hashem. Next, he recognizes the truth that he is a small and insignificant creature that is entirely dependent on Hashem, yet Hashem performs unbelievable kindness for him from the moment he is born until the moment he leaves this world. (She’arim B’tefilah p.102)