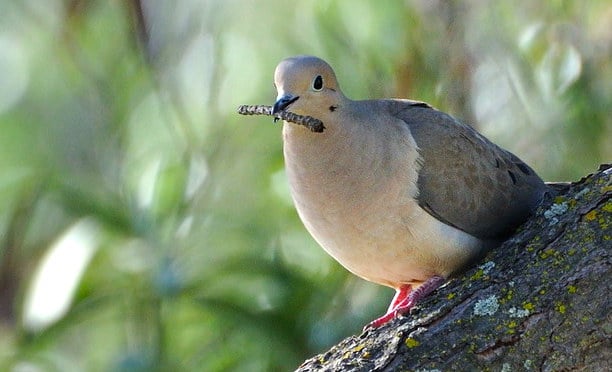 We read in this week’s Parashah that, after the flood, Noach sent a Yonah / dove to scout for dry land. At first, the Torah tells us (8:9), “The Yonah could not find a Mano’ach / resting place for the sole of its foot, and it returned to him to the Ark, for water was upon the surface of all the earth.” Then, says the Torah (8:10-11), “[Noach] waited again another seven days, and again sent out the Yonah from the Ark. The Yonah came back to him in the evening–and behold! It had plucked an olive leaf with its bill. Then Noach knew that the waters had subsided from upon the earth.”

In the Shabbat Zemer “Yom Shabbaton,” we read: “Yonah Matz’ah Bo Mano’ach” / “On it (Shabbat), the dove found a resting place.” R’ Aryeh Leib Gordon z”l (1845-1912; Lithuania and Eretz Yisrael; Grammarian and author of commentaries on the Siddur) writes: This refers to the Congregation of Yisrael, which is likened to a dove (see Shabbat 49b), and which rests on Shabbat. Alternatively, R’ Gordon writes, the Zemer is referring to the Yonah that Noach sent out, which found a resting place on Shabbat. (Siddur Otzar Tefilot: Etz Yosef p.770)

How do we know that the day on which the Yonah found a resting place was Shabbat? R’ Yosef Shaul Nathanson z”l (1808-1875; rabbi of L’vov, Galicia, and a leading Halachic authority) writes: The author of the Zemer must have had access to a Midrash that is lost to us. Alternatively, the author derived it from the fact that the Torah tells us: “He waited again another seven days”–alluding to the Seventh Day, Shabbat. (Divrei Shaul)

Notably, a student of R’ Yisrael Isserlin z”l (the “Terumat Hadeshen”; Central Europe; 1390-1460) records that his teacher did not sing the Zemer “Yom Shabbaton” every week, but he did sing it on Shabbat Parashat Noach because it was Inyana D’yoma / relevant to that particular day. (Lekket Yosher p.36)

“These are the offspring of Noach–Noach was a righteous man, perfect in his generations; Noach walked with Elokim.” (6:9)

R’ Yaakov Moshe Charlap z”l (1882-1951; rabbi of Yerushalayim’s Sha’arei Chessed neighborhood and Rosh Yeshiva of Yeshivat Mercaz Harav) writes: Some of our Rabbis explain “in his generations” to Noach’s credit: He was righteous even in his generation; surely, he would have been even more righteous had he lived in a generation of righteous people. Others, however, explain it to Noach’s discredit: In comparison with his own generation, he was considered righteous; but, had he lived in Avraham’s generation, he would have been considered of no importance. (See Rashi z”l)

Those who interpret the verse to Noach’s credit are noting that, had he lived among Tzaddikim, he would have remained a hidden Tzaddik and focused on his own further growth. He would have become even more righteous. Those who interpret the verse to Noach’s discredit mean that it would have been improper for Noach to remain a hidden Tzaddik. No matter what the generation is like, one should exert whatever influence he can. Since Noach would not have done that, he would have been considered of no importance. (Mei Marom V)

R’ Yosef Zvi Rimon shlita (rabbi of the Gush Etzion Regional Council and Rosh Yeshiva at the Jerusalem College of Technology-Machon Lev) writes in a letter: This is the first time in the Torah that the verb “Vy’daber” is used to describe Hashem’s speaking to a person. Until now, only “Va’yomer” was used. Commentaries teach that the difference between the two verbs is that “Va’yomer” transmits information, while “Vy’daber” implies that some type of bond is formed between the speaker and the listener. “Vy’daber” is used now because Noach needed a bond with Hashem at this time; he needed encouragement and reassurance before leaving his quarantine in the Ark, where he had felt safe until now.

Later in the same letter, R’ Rimon writes: Halachah requires that “Sheva Berachot” in honor of a bride and groom be recited only when there are “Panim Chadashot”–literally, “new faces,” i.e., guests who were not present at any prior Sheva Berachot. The exception is on Shabbat, when Panim Chadashot are not required. Perhaps, writes R’ Rimon, the requirement for Panim Chadashot reflects the fact that getting together with friends enhances an occasion’s joyfulness. If so, then the reason that Panim Chadashot are not required on Shabbat may be because, on Shabbat, every person “shines” with a new “light.” Thus, even seeing friends who we have seen recently brings new joy when we see them on Shabbat. (She’eilot U’teshuvot Pelach Ha’rimon 35)

“He drank of the wine and became drunk, and he uncovered himself within his tent. Cham, the father of Canaan, saw his father’s nakedness and told his two brothers outside.” (9:20-21)

It seems, says R’ Yosef Chaim Sonnenfeld z”l (1848-1932; rabbi of the Eidah Ha’charedis of Yerushalayim), that Noach was not aware of the dangers of excessive drinking–despite being more than 600 years old, and his son Cham, who was approximately 100 years old, also had never seen a drunken person! Can this be?

R’ Sonnenfeld explains (in the name of his grandfather): Midrashim relate that the atmosphere and climatic conditions were entirely different after the Flood compared to before. Before the Flood, the air was always clear and fresh. Vegetables and meat never spoiled because microbes and bacteria were absent from the air. Before the Flood, the entire world enjoyed the same fresh air that later was found only in the Bet Hamikdash, where, we are told (Avot ch.5), the meat of the Korbanot never went bad.

As such, continues R’ Sonnenfeld, fermentation also was impossible or, if it was possible, it produced only weak alcohol, Thus, in fact, no one had ever become drunk before the Flood. What Noach experienced, and what Cham witnessed, was an entirely new phenomenon after the Flood. (Cham is not criticized for being bewildered by what he saw; only for sharing the news of his father’s shame with his brothers.) (Chochmat Chaim)

“Any weapon sharpened against you shall not succeed . . . ; this is the heritage of the servant of Hashem . . .” (Yeshayah 54:17–from this week’s Haftarah)

R’ Moshe Halevi Pollak z”l (late 19th century rabbi of Bonyhád, Hungary) writes: There are wicked people who rise up against Tzaddikim, and, when they say that they cannot sway those righteous people, they console themselves: “At least the children of the Tzaddikim will join our ranks after their parents pass away.” Hashem has given us the ammunition to ensure that these “weapons sharpened against [the righteous and their children] shall not succeed.” That ammunition is the Torah, “the heritage of the servant of Hashem.” If we make sure to pass the teachings of the Torah to our children as their inheritance–not worrying only about how much material wealth we leave our offspring–then they, too, will be protected from the wicked. (Vy’daber Moshe)

R’ Saadiah Gaon z”l (882-942; Egypt, Eretz Yisrael and present-day Iraq; author of the earliest known work on Jewish Thought) writes: Some Mitzvot prohibit things that our intellect tells us are wrong–for example, murder, adultery, and stealing. Another category of Mitzvot prohibits things that our intellect would not know to prohibit. This category includes, among other things, Mitzvot that sanctify one day over another–i.e., the prohibitions on performing labor on Shabbat and Yom Tov.

R’ Saadiah continues: The primary reason why we should observe Shabbat is because G-d commanded it. At same time, it is possible to identify benefits that we receive from observing Shabbat, keeping in mind that the wisdom of the Creator is above all else. [R’ Yosef Kapach z”l (1917-2000; rabbi in Yemen, later a member of Israel’s Supreme Rabbinical Court) explains: Any reasons we can discover for the Mitzvot are only hypotheses, for Hashem’s wisdom is beyond us.]

First, writes R’ Saadiah, Shabbat is a time for physical rest from the week’s hard work.

Second, Shabbat is a time when we have more free time to study “a little bit” of the Torah’s wisdom [for we cannot grasp all of it, as noted above] and to devote more time to Tefilah / prayer.

Lastly, R’ Saadiah writes, on Shabbat we can interact with friends and share Divrei Torah with them. (Ha’emunot Ve’ha’de’ot III:2)