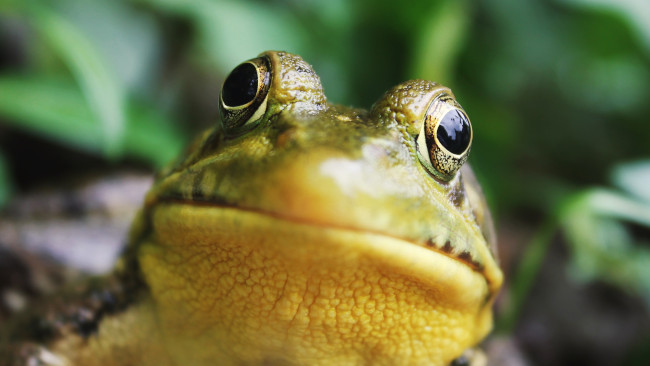 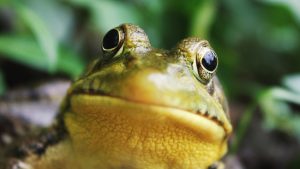 Frogs. Everywhere the Egyptians looked there were frogs. In the streets, in their homes, on their beds, even in their ovens. Billions of slimy frogs with bulging eyes, biting everything in sight and letting loose a cacophony of raucous croaks at an ear-shattering, mind-numbing decibel level. Egypt was prostrate and helpless.

Where did all these frogs come from? Did they descend on Egypt in swarms, like the predators and the locusts of later plagues? Our Sages tell us that they did not.

It all began with a single frog emerging from the river. The Egyptians struck the repulsive creature in an attempt to kill it, but to their shock, the frog split into two exact replicas of the first, like an ameba undergoing binary fission. The Egyptians then struck these two frogs, and they, too, executed an immediate two-for-one split. The Egyptians flogged the frogs again and again, but all they accomplished was a rapid geometric proliferation of slimy creatures that metastasized into an all-encompassing plague that gripped Egypt in a reptilian stranglehold.

Let us try and visualize this surreal scenario, Egyptians desperately striking at the frogs again and again only to see them multiply before their very eyes. We cannot help but marvel at the utterly bizarre behavior of the Egyptians. Why in the world would they continue to flog the frogs when each blow just exacerbated the situation? Couldn’t they see that striking the frogs was counterproductive, to say the least? There can be only one explanation. They were not thinking rationally. With the painful memory of the blood plague still fresh in their minds, the Egyptians reacted to the onset of the promised second plague with anger and frustration bordering on panic. For all practical purposes, the stress caused them to take leave of their senses and lash out in a totally irrational manner. As the frogs multiplied, the demented frenzy of the Egyptians drove them to ever more violent reactions, which caused even more frogs to appear. They were caught in a downward spiral headed for disaster.

But the question still remains: Why indeed did Hashem choose to send the plague in this fashion? Why didn’t he simply unleash a massive flood of frogs on Egypt as he would eventually do with the predators and the locusts?

The commentators explain that Hashem knew the Egyptians would react irrationally. In fact, this itself was one of the crucial messages of this early plague. The message was simple and straightforward. Just as it was futile and indeed irrational to flog the frogs, so would it be futile and irrational to defy the will of Hashem. Just as fear and revulsion could cause them to take leave of their senses and flog the frogs, so could their inflated egos cause them to scorn the divine retribution of the plagues and insist on keeping the Jewish people enslaved. It would be the height of madness to disobey the commands of Hashem. Hashem had give the Egyptians a warning within a warning, but they chose to disregard it.

A merchant came to seek the advice of a great sage.

“My business is failing,” he said. “I have tried everything, but the customers have stopped coming to my store. I don’t know what to do.” “Tell me what you have done thus far,” said the sage.

“Well, I’ve spent a fortune on advertising. I’ve run numerous sales. I’ve renovated my store. The worse the situation became, the more money I spent on advertising and renovations. But nothing helps.”

“I think I see the problem, my friend,” said the sage. “You’ve been looking in the wrong direction. Drawing all the customers in the world to your store won’t help if your product is inferior. Look inward. Improve your product, and your customers will return.” In our own lives, things sometimes do not go our way, no matter how much or how often we try. Clearly, this is a message from Heaven. Sometimes, however, we refuse to acknowledge it and stubbornly continue to bang our heads against brick walls, inflicting grievous damage on ourselves and our loved ones in the process. Only when wisdom prevails and our minds take control of our impulses can we recognize Hashem’s hand and look inward for the causes of our misfortune. And when that happens, no matter how our problems are resolved, we will be forever enriched by our newfound closeness to Hashem. Text Copyright © 2009 by Rabbi Naftali Reich and Torah.org.