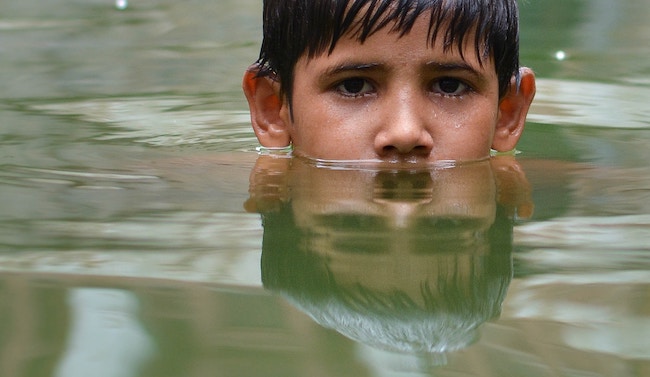 The Face Reflecting in the Water is Yours 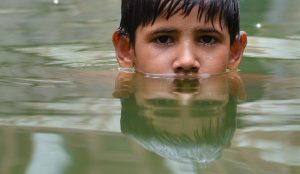 This week we read the parsha of Va’yishlach. At the end of last week’s parsha, Yaakov, after the birth of Yosef, left the house of Lavan to return to Eretz Yisroel (Land of Israel).

“Va’yishlach Yaakov malachim l’fanav el Esav achiv {And Yaakov sent ‘malachim’ ahead to Esav his brother}[32:4].” Yaakov was afraid that Esav was still planning to murder him for impersonating him and receiving the brachos {blessings}. He therefore sent these ‘malachim’ to test the waters and determine Esav’s attitude and intentions.

The word ‘malachim’ can either mean messengers or angels. Rashi understands that Yaakov sent actual angels to Esav. Why was this necessary? The Ohr HaChaim explains that Yaakov was afraid that Esav would, at best, disregard ordinary messengers, or, at worst, beat them to the point that they’d be unable to return. This would allow Esav a sneak attack against Yaakov. Yaakov therefore sent actual angels hoping to strike some fear into Esav’s heart. Let Esav realize that these awesome, frightening angels do the bidding of Yaakov and let him beware.

These awe-inspiring, celestial couriers returned to Yaakov with the following account of Esav’s reaction. “And the angels returned to Yaakov saying: ‘We came to your brother (you, Yaakov, view him as your brother) to Esav (his brotherly feelings are somewhat lacking — he’s Esav!) and four hundred men are with him (it ain’t gonna be pretty…)’ [32:7].” Esav wasn’t worried or intimidated in the least — he was planning to make good on his earlier threat.

Yet, when the two meet, the verse states: “And he (Yaakov) bowed seven times until he had drawn close to his brother. And Esav ran to greet him and he hugged him and he fell on his neck and kissed him, and they cried [33:3-4].” What happened!? What broke through Esav’s animosity and brought about such a drastic change of attitude?

Before the establishment of the State of Israel, Rav Yosef Chaim Sonnenfeld zt”l, one of the venerable sages of Jerusalem, was adamantly advocating a strong religious presence and attitude in the holy city. There were many who resolutely opposed his views and goals. Once, a group of ruffians stormed into his house and began to threaten him. His calm demeanor and responses seemed to confuse the aggressors who nevertheless continued their threats. As their curses and threats reached a crescendo, the Rav suddenly opened his shirt and moved toward the intruders. “Shoot me! Kill me!” he shouted. “I’m ready to sacrifice myself for my principles — I’m not ready to sacrifice what I see as truth.” He then gently explained his views on Hashem and Jerusalem. The humbled assailants shamefacedly hurried from his home.

Much later, Rav Yosef Chaim explained his behavior by relating the following story. In Shadik, Poland there was a moser {informer} who terrorized the Jewish community. While he was being richly rewarded, tremendous suffering was befalling the town as a result of his slanderous reports. He furthermore had the audacity to demand the most dignified seat in the synagogue and to be called to the Torah for the most honorable aliyah {different people are honored to be called to the Torah during the reading}.

When the community Rav had passed away, the position was filled by one of the Torah leaders. He had wanted the position in this smaller community as it would afford him a chance to devote himself to his studies in a relatively uninterrupted way. He had a small Beis Medrash {study hall} adjacent to his house wherein he immersed himself in prayer and study. When the new Rav heard of the damage being caused by this moser and his insolent demands for honor, he decided that this disgrace could not continue.

On one Shabbos, the Rav appeared in the main synagogue. When the moser was called for the aliyah, the Rav pounded on the lectern and shouted: “What do you have to do with the Torah!? You endanger the lives and possessions of your brothers! How dare you come forward to pronounce a blessing on the holy Torah? Leave at once!”

The humiliated man hurriedly backed out of the synagogue. As he was leaving, though, he turned to the congregation with a wicked smile and sneered: “I’ll teach you… You’ll all pay for this dearly…”

The next few months passed uneventfully with the community nervously awaiting the explosion of the time-bomb. One day, the Rav was summoned to a nearby village to perform a bris {circumcision}. As he was traveling with two disciples, they saw in the distance the moser approaching on a horse. They became quite nervous while the Rav maintained his calm composure. Suddenly, as the horse was almost upon them, the moser jumped off the horse and ran toward the Rav. To the shock of the students, he bowed before the Rav and began to beg him for forgiveness. He then mounted his steed and rode off.

The Rav turned toward his bewildered students and explained. “When I saw him approaching, I sought counsel from a passuk {verse}. I thought of the verse in Mishley [27:19]: As the face of the water reflects the face that it’s shown, so too the heart of a man to a man. I started to search for some merit on his behalf. How sad, to think of the state of callousness that this man has sunken to. Perhaps, with the right education and home, this would never have happened to him. I kept thinking along these lines until I was overcome with compassion for him and bore him no animosity or ill will whatsoever. Once I was viewing him in that way, his heart responded in kind to that warmth and caring. He started to think: ‘Perhaps the Rav is right. His intentions are not for personal honor or simply to fight with me. His intentions are truly for the sake of Hashem’s honor.’ With such reciprocal thoughts, he approached me to beg forgiveness for what he had done.”

Rav Yosef Chaim continued that this can really be seen in the Torah itself. Yaakov heard that Esav was approaching with four hundred ruffians. What did he do? “And he (Yaakov) bowed seven times until he had drawn close to his brother [33:3].” Yaakov ‘bowed’ his thinking until he was able to view Esav in a different light. He sought merit ‘until he had drawn close to his brother’! Once those feelings of brotherly love had been firmly entrenched in his heart, the heart of Esav responded in kind. Overcome with compassion, Esav hugged and kissed Yaakov.

“As the face of the water reflects the face that it’s shown, so too the heart of a man to a man.”

In my line of work, at times I’ve had to approach boys who have been somewhat less than enthusiastically motivated towards Torah study and Judaism in general. Almost without fail I’ve found that if I walk into his room with the feeling that there’s no way this guy’s going to attend the shiur {class}, then he doesn’t. If, however, I’m thinking that this young man just needs to hear Hashem’s words presented in the correct way. That this guy can really make something out of himself and be extremely successful at whatever he’ll decide if he’ll only apply himself. Then, the response that I get is almost always an encouraging one.

“As the face of the water reflects the face that it’s shown, so too the heart of a man to a man.”

Let’s try to compassionately see the good in others and have that be the feeling in our hearts. May the ‘heart’ of Hashem respond in kind, reverberating kindness and compassion by sending us the Moshiach {Messiah}, speedily in our days, Amen.