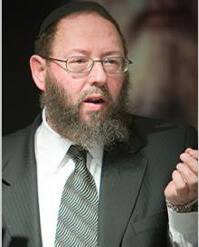 Greatest Accolade Given To Mordechai

Parshas Zachor (Vayikra): The Greatest Accolade Given To Mordechai:

The last pasuk [verse] in the Megilla reads “For Mordechai, the Yehudi, was viceroy to King Ahashuerus; he was a great man among the Jews, and found favor with the multitude of his brothers (ratzui l’rov echav); he sought the good of his people and spoke with peace to all his posterity. (v’dover shalom l’chol zar’oh)” [Esther 10:3]

The Ibn Ezra makes two very interesting comments on this pasuk. He says regarding the phrase “he found favor with the multitude (literally the majority) of his brothers,” that because of jealousy, a person cannot find favor with everyone. It is impossible to be perfectly popular.

Then the Ibn Ezra comments on the buildup of praises that we have in the pasuk. The concluding, and seemingly greatest praise is that “he spoke with peace to all his posterity.” The Ibn Ezra comments that this means he was on good terms with all his children and grandchildren.

This seems anti-climactic. Is this the greatest thing we can find to say about Mordechai HaYehudi? The Ibn Ezra says this is indeed a great praise.

And yet, he spoke in peace to all descendants. He was able to maintain a peaceful relationship with all his children and all his grandchildren. This, the Ibn Ezra tells us, is a great thing. Because of the natural fear that children have towards parents, it is not always true that there is a loving relationship between parents and children. Therefore if Mordechai could maintain such a relationship, this is indeed the highest accolade that the Torah can offer him.

I think this is a great ethical lesson for us. We try to raise children, and we have certain ideals and standards of how we would like our children to be. It does not always turn out like that. But we should always strive to maintain a relationship where we can, at least, speak peacefully with all our offspring.

One Who Gladdens Hearts on Purim is Compared to G-d

The Ramba”m in the Laws of Yom Tov [6:18] speaks about the nature of the Mitzvah of Simchas Yom Tov. The Ramba”m says, “when he eats and drinks, he has to feed the stranger, the orphan, and widow together with the other poor and unfortunate people. However he who locks the gates of his courtyard and sits down to feast with his wife and children but does not provide food for the poor and embittered of spirit — such is not the rejoicing of Mitzvah; it is the rejoicing of one’s own stomach!”

In the Laws of Megilla [2:17] as well, the Ramba”m speaks of the mitzvah of rejoicing on Purim. There the Ramba”m writes, “It is preferable for a person to be excessive when it comes to the Mitzvah of giving gifts to the poor rather than to be excessive when it comes to feasting and sending food portions to friends, because there is no greater or more glorious rejoicing than to gladden the hearts of the poor, the orphans, the widows, and the strangers, for one who gladdens the hearts of these unfortunate individuals can be compared to the Shechina (G-d’s Divine Presence) as it is written [Yeshaya 57:15] ‘to revive the spirit of the humble and to revive the heart of the crushed.'”

It would seem to us that if we would speculate when there is a greater mitzvah to gladden the hearts of the widows and orphans — on Yom Tov or on Purim — we would logically think that on Yom Tov there would be a bigger mitzvah. Yom Tov, after all, is a Biblical command. Purim is Rabbinic in origin. Yet the Ramba”m goes out of his way and says something that he says very rarely in the entire Mishneh Torah — “that one who gladdens the hearts of these can be compared to the Shechina!” He does not say that concerning the laws of Yom Tov.

What is the Ramba”m telling us here by saying that a person who makes the less fortunate happy on Purim is comparable to G-d?

The Medrash in Esther says on the pasuk “to know what is this (mah ZEH) and about what is this (v’al mah ZEH)” [Esther 4:5] that when Esther queried Mordechai she was alluding to something. She said “What’s happening? What have we done? Never in Jewish history has there been such a decree as Haman has issued. Have they perhaps denied the pasuk ‘This is my G-d’ (ZEH Keyli) or perhaps they denied the Ten Commandments about which it is written ‘from this way and that way (m’ZEH u-mi’ZEH) were they written?”

The Medrash continues that Mordechai responded and said that the reason the Jews were suffering was a result of the grandson of ‘Karahu.’ Who is ‘Karahu?’ ‘Karahu’ refers to Amalek about which it is stated, “Who happened to you (asher Korecha) on the road” [Devorim 25:18]. Our Sages tell us that Amalek represents the antithesis of Belief in this world. Amalek denies the existence of a Creator of the world.

What I mean is as follows: The Talmud says that the reason the Jews were deserving of destruction, was that “they enjoyed the banquet of that evil one” [Megilla 12a]. What was so bad about partaking in the banquet of Ahashuerus?

Was it Treife? Heaven Forbid! “The drinking was according to the law, nothing was forced” [Esther 1:8]. It was Kosher as could be, according to every stringent opinion. So what was the sin? The sin was that the Jews attended a Feast given by the gentile, at which the gentiles took out the Vessels of Service (Klei Shares) of the Beis HaMikdash — and the Jews sat there and kept on feasting!

Even Jews who today are totally assimilated, who would not think twice about eating at a non-kosher feast… if their non-Jewish hosts would serve them on the utensils stolen from the holy Temple, their reaction would be: Stop! “These are the utensils of the Holy Temple.” Which Jew would not get up and yell, “These are my utensils! These are the vessels of our Beis HaMikdash!”?

The fact that the Jews in Shushan could sit there through a meal and use those vessels was a terrible sin!

The difference between those Jews and the Jews of our day is that today, as non-observant as a Jew may be, he can still can believe in Judaism, he can believe in G-d and redemption, and he knows that there is hope.

That is what the story of Purim restored. There was a decree. The Jews were motivated to do Teshuva and the Ribbono shel Olam came back and breathed life into this dead body of the Jewish people and gave them hope. That is what happened on Purim. G-d took His breath of Life and restored hope to a forlorn nation.

Rav Hutner said there is a mitzvah to emulate G-d. If G-d on Purim brought the dead back to life, if He took hopeless and down-trodden Jews and gave them hope, it becomes our Mitzvah on Purim to do the same thing. Therefore the Ramba”m says that on Purim there is no greater mitzvah than to gladden the hearts of the unfortunate and downtrodden. The essence of the day is to give hope, meaning, and comfort to broken-spirited people… because that is what G-d did. A person therefore who does this will be comparable to G-d.

Simchas Yom Tov — Rejoicing on Festivals
Treife — literally ‘torn’; an animal in which certain body parts are torn is non-kosher.
Ribbono shel Olam — Master of the World
Glatt –literally ‘smooth’; unquestionably kosher, because there are no lung adhesions which may indicate the possibility of a ‘tear’
Cholov Yisroel — Milk in which a Jew supervised the milking (to ensure that it was milk from a Kosher animal)
Yashan –literally ‘old’; refers to grain from the prior year’s crop; ‘new’ grain which first grows after the 16th of Nissan (the date of the Omer offering) is forbidden until that date on the following year.
Hidurim –literally ‘beautification’; refers to performance of commands in the most optimal way.
Teshuva –repentance