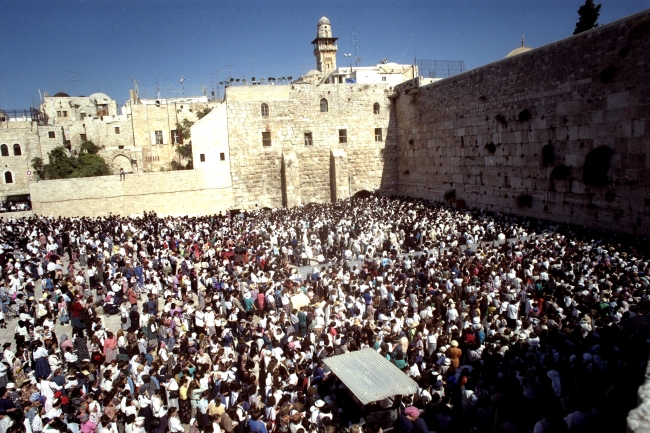 The Power of the People / Praying for True Needs 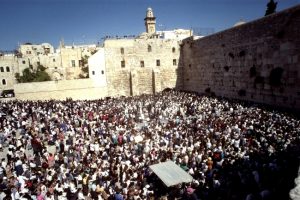 These divrei Torah were adapted from the hashkafa portion of Rabbi Yissocher Frand’s Commuter Chavrusah Tapes on the weekly portion: CD #1029 — Must a Person Eat Bread in Order to Bentch? Good Shabbos!

Parshas Acharei Mos is the parsha which details the ritual of the Avodas Yom haKippurim [Yom Kippur Service] in the Beis HaMikdash. That is why we read from this parsha on Yom Kippur morning, and the entire Tractate Yoma revolves around how to exegetically interpret the pesukim in this week’s Torah reading. If that is the case, we would expect the parsha to have begun with pasuk 16:2, “And Hashem said to Moshe: Speak to Aaron your brother – he may not come at all times into the Sanctuary, within the Curtain…”. And yet, the opening pasuk in the parsha is the one which precedes this introduction to the Avodas Yom haKippurim.

The Parsha begins: “Hashem spoke to Moses after the death of Aaron’s two sons, when they approached before Hashem, and they died.” [Vayikra 16:1] Why is this pasuk here? Nadav and Avihu died earlier in Parshas Shemini. Offhand, we would say it is non-germane to the whole subject of Avodas Yom HaKippurim. Rashi raises this issue. Rashi explains by way of a parable, in the name of the Tanna Rav Elazar ben Azarya:

Figuratively speaking, Hashem was putting the Fear of G-d into Aharon here: “You better do this right, so you won’t die like Nadav and Avihu died!” This is Rashi’s approach.

However, the example given needs to be analyzed. Let us say a person comes into a doctor and has emphysema. The doctor will tell him, “You know, you have to stop smoking.” Another person will come into the doctor with high cholesterol. Will the doctor tell him “You know, that other fellow died from emphysema. You better watch it too!”? The patient will rightly respond, “That has nothing to do with me. I don’t have emphysema; I have high cholesterol!”

So this whole parable Rashi presents is problematic. The example being cited (the death of Nadav and Avihu) is not germane to Aharon, and would not seem to scare, or in any other way motivate him, to properly perform the Avodas Yom haKippurim.

The Sefer Tiferes Shlomo clarifies Rashi’s intention. The fact that the Torah says that the righteous Nadav and Avihu brought “a foreign fire before Hashem” is a very difficult issue, particularly inasmuch as Chazal give a host of other reasons for which they were punished, as stated above. What is the connection between their bringing a “foreign fire” and doing all the other things listed by Chazal? The Tiferes Shlomo’s contention is that their primary aveira [sin], and all the derivatives thereof, stemmed from one thing: “…when they drew near before Hashem and they died.” [Vayikra 16:1]

They had this burning passion to come close before the Ribono shel Olam in their own way. They perceived that the way the rest of Klal Yisrael conducted themselves was all fine and good for the masses (the ‘hamon am’). They did not consider themselves to be part of the ‘proletariat.’ They felt, “We are higher. We have a different protocol than everyone else.” They saw themselves — by virtue of their having “drawn near before Hashem” — to be separated from the people. That is why they did not take the fire from the outer Altar the way they were supposed to. They said to themselves: What is the “Outer Altar”? That is the Public Altar. We do not want to have anything to do with the public.

Therefore, the common denominator of all their shortcomings is linked to this perception of their wanting to have their own approach to G-d, stemming from their feeling of being uniquely close to Him. They wanted to be separate from the people.

Avodas Yom HaKippurim is the opposite of that. The Kohen Gadol enters the Kodesh Hakodashim [Holy of Holies] once a year, on Yom Kippur. The Kli Yakar explains that he is permitted to go into this holy place on Yom Kippur because on that day Klal Yisrael is pure. The Kohen Gadol, who represents Klal Yisrael, can only enter then because of the holiness of the entire nation on that unique day. He does not enter as an individual. He enters as the representative of the people, because of his connection to the people.

This is the connection between the warning to Aharon before beginning the Avodas Yom HaKippurim, and the reminder of the death of his two sons. They did not see themselves as connected to — and representatives of — the rest of the nation. Rather, they died as a result of seeking personal closeness to the Almighty.

Our Prayers Should be for what We Truly Need

The above thought leads us to another matter. The Talmud teaches in Tractate Yoma [53b] that when the Kohen Gadol [High Priest] exited from the Kodesh Hakodashim [Holy of Holies], he uttered a “brief prayer” (Tefilla Ketzara). This was a prayer that was solely related to Klal Yisrael. What was this prayer that the Kohen Gadol recited upon emerging from the Kodesh Hakodashim?

#1. Klal Yisrael should retain its sovereignty over itself, and should not be subjugated to any other government or political power.

#2. Everyone in Your nation should have a decent livelihood; they should not have to beg from one another, or from others.

#3. Do not accept the prayers of the travelers. (Travelers pray that there should be good weather, and that it should not rain while they are on the road.)

When he emerges from the Kodesh Hakodashim, he utters a short prayer. He does not have a lot of time. These are the three most important things this holy person is praying for in that holy place, at that holy moment, on the holiest day of the year. Clearly, the first two components of this prayer are vital, and of global significance, but what about the third component? Is not accepting the travelers’ prayers in the same league as continued sovereignty and sustenance?

The sefer Bei Chiya cites this question, and brings an explanation from the sefer Divrei Yechezkel on Tehillim. I believe that what he says is a very important concept.

The pasuk in Tehillim 22:2 says, “…rachok m’yeshuasi, divrei sha’agasi” [So far from my salvation are the words of my scream]. That which I scream (daven and pray) for is so distant from the salvation I really need. The Divrei Yechezkel says that people do not realize what their needs really are. Rather than thinking globally — in terms of the big picture — they think in terms of trivialities. They merely think in terms of those needs which are right in front of their noses. The reason the Ribono shel Olam does not respond to my prayers is because I am praying for what I do not really need.

We daven that our child who is in Little League should get a hit so that he will not be embarrassed in front of his friends. But that is a trivial matter. A year from now, it will not make the slightest difference if he got the hit or not. This, however, is what we are thinking about. It is on our head because our kid is crying that he struck out. It is disturbing to us. But do not waste your tefillos on such nonsense! Rachok m’yeshuasi, divrei sha’agasi. The Divrei sha’agasi [that which I am crying about] are so distant from what I really need! People are short-sighted. They fail to see beyond the here and now. They do not look at the future.

When the Kohen Gadol prays on Yom Kippur “Let the prayers of the wayfarers not come in before You,” he is not only davening about the travelers. The travelers are symptomatic of people who only daven for the here and now. Joe Traveler needs to be on the road today, so he davens that it should not rain. Do not be small minded. Do not be so transient and so temporal. Think big. Think about what you really need. By praying not to accept the prayers of the travelers, the Kohen Gadol is beseeching the Almighty not to accept people’s trivial prayers. People should have the capacity to daven for that which is important and truly significant.

Among the big things the Kohen Gadol davens for — Sovereignty and Livelihood — he also prays that people should daven for the right things that they really need, and that they should allow the trivialities to fall by the wayside.

This week’s write-up is adapted from the hashkafa portion of Rabbi Yissochar Frand’s Commuter Chavrusah Series on the weekly Torah portion. A listing of the halachic portions for Parshas Kedoshim is provided below: