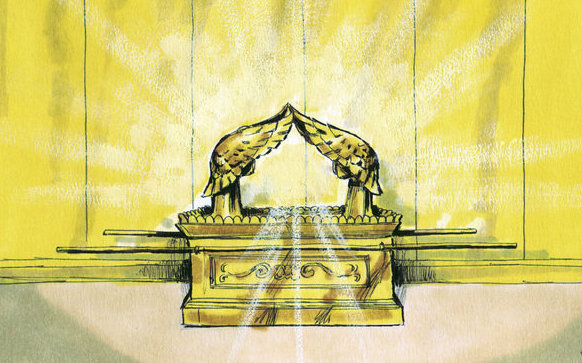 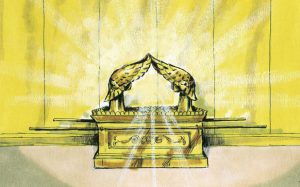 These divrei Torah were adapted from the hashkafa portion of Rabbi Yissocher Frand’s Commuter Chavrusah Tapes on the weekly portion: #1108 Being from the First Ten at Davening. Good Shabbos!

Unlocking the Mystery of the Keruvim That Were Locked in Embrace

Among the various physical components of the Mishkan, there were two Keruvim on top of the Aron (Ark) with child-like faces.  One of the Keruvim was male in form and the other was female in form.  In the Gemara in Yoma 54, Reish Lakish says that when the Romans came in to destroy the Bais HaMikdash (Holy Temple), they saw the Keruvim embracing one another.  The Gemara in fact says that the Romans mocked the Jews for this.  They thought the Jews were perverted.  “Here in their Holy Temple, they have a statue of a man and a woman embracing!”

These Rishonim therefore ask: How was it that the Romans came in and found that the male-female Keruvim were locked in an embrace?  There is no greater “time when Bnei Yisrael were not fulfilling the Will of the Omnipresent” than this moment!

They cite an answer in the name of the Ri Migash (Rav Yosef ibn Migash): A miracle was performed at that moment, to cause embarrassment to the Jewish people.

Another answer is said over in the name of several of the great Chassidic leaders, including the Bnei Yissacher [Rav Tzvi Elimelech Spira of Munkatch] and the Ohev Yisrael [Rabbi Avraham Yehoshua Heschel of Apta].  It is a very interesting answer.  I will cite the teaching of a Chazal they quote, and then I will try to put this answer into understandable terms.

This is an example of Chayav adam lifkod es ishto kodem she’yeitzei l’derech (A husband is duty-bound to “visit” his wife before setting out on a journey).

The reason the Keruvim were in this embrace at this time was because this was—as it were—a “goodbye embrace.”  Yes, it was a time when the Jews were not fulfilling the Will of the Almighty.  But now, the Ribono shel Olam was going to leave us for what has become 2,000 years.  When you are about to leave someone that you love, you kiss them good-bye.  Therefore, in spite of the fact that it was a time where “they did not do G-d’s Will,” nevertheless, they embraced for that final moment.  This was that good-bye kiss which the historical moment demanded.  Despite the fact that the Jews had reached this very low level, nevertheless—”A husband is duty-bound to “visit” his wife before setting out on a journey.”

I saw a third answer to this question in a sefer called Shabbos u’Moadim, which has somewhat of a different take on this situation.  The Medrash [Vayikra Rabbah, Parshas Emor] cites a situation where one sees a Jew who is being brought to his death—being stoned.  A voice calls out: “Why is this happening to you?”  The response: “It is because I circumcised my son.”  (I am paying for my life for fulfilling the mitzvah at a time when there was a governmental decree against circumcision.)  A voice calls out (to another person): “Why are you being burnt at the stake?”  The response: “It is because I observed the Sabbath.”  Again, “Why are you going out to be beheaded?”  “It is because I ate matzah.”  “Why are you being beaten by the whip?”  It is because I made a Succah; I took a Lulav, I put on Tefillin, or I wore Techeilles.  It is because I fulfilled the Will of Father in Heaven.”

Through the centuries and through the millennia, the Jews have had this capacity that even if it cost them their lives, they still felt it necessary to cling to the Almighty and to His mitzvos.  They still felt connected to Him.  I once heard something which is so mind-boggling to me that it is hard to say over: The Chossid Yavetz (he was part of the expulsions from Spain and Portugal in the late fifteenth century) on Pirkei Avos writes that there was a woman who lost virtually her entire family.  She had only one son remaining.  She hired a ship to take her and her son away from Portugal.  The shipmen took her to an island, killed her son, and left her abandoned there.  The woman was heard praying, “Almighty, You are trying to push me away, but I won’t give up my love for You.”

It is mind-boggling that no matter what has happened to Jews, they still felt this connection to the Ribono shel Olam.  If you remember from Succos, the alphabetic Hoshanna of “Om ani chomah” contains for the phrases beginning with the letters hay, vov, zayin, ches, the following expressions: “Ha’Harugah alecha” (murdered for Your sake); V’nechsheves k’tzon tivcha (and regarded like a sheep for slaughter); Zeruya bein mach’iseha (scattered among her provocateurs) but nevertheless—in spite of all of the above—Chavukah u’devukah Bach (she hugs and cleaves to You).

Rav Meir Shapiro says that this is the interpretation (albeit not the simple “pshat“) of the pasuk “Has a people ever heard the voice of G-d speaking from the midst of the fire as you have heard, and survived?” [Devorim 4:33].  Rav Meir Shapiro interprets the pasuk as expressing amazement that Klal Yisrael has heard G-d speak to them from the fires of persecution and oppression by their enemies, and have yet kept their devotion to Him.

This, he says, is what happened over here with the Keruvim.  Yes, the Ribono shel Olam was kicking us out.  Nevertheless, He was kissing us goodbye.  The Keruvim, who were locked in their final embrace, symbolized this.

I would like to share an observation from an atypical source.  It is from an article in this week’s (January 28, 2011) Wall Street Journal.  What does the Wall Street Journal have to do with Parshas Terumah?  I do not read the WSJ on a regular basis, but there is a Rebbe in Lakewood—Rav Asher Dicker—who called me up and said, “This is an article that you can use.”

The name of the article is, “The Fate of The Kilo Weighs Heavily on the Minds of the Metrologists.”

In a vault beneath the 17th century pavilion on the outskirts of Paris sits a platinum cylinder known as “Le Grande K.”  From 1889 until 2019, the Le Grande K was the international prototype for the kilogram, the standard against which all other kilos are measured.

The article explained that this was “the kilogram.”  We need to know the exact value of a kilogram, and there is a vault in Paris that has a platinum cylinder that weighs exactly one kilo.  Le Grande K was so well protected, that there were three people in the world with the three different keys to the vault.  The vault could only be opened with all three people present.  It was “the kilo.”  However, there was a crisis.  Over the years, scientists noticed a problem.  The “Grande K” was losing weight.  Weigh-ins at the International Bureau of Weights and Measures showed that the bar had shed approximately 50 micrograms, which is the equivalent of one grain of sand.

To you and me, it does not make a great deal of difference that the “Grande K” is off by one grain of sand.  However, this was a crisis in the scientific community.  “It is a scandal that we have this kilogram hanging around and changing its mass and therefore changing the mass of everything else in the universe,” Bill Phillips, a Nobel Prize winning physicist, exclaimed at a scientific summit in London this week.  “No one knows for sure what went wrong with ‘Le Grande K’ but some theorize it lost weight from being cleaned.”

What does this have to do with Parshas Teruma?

My friends, the Torah says about the Aron HaKodesh (Ark of the Testimony) in the Beis HaMikdash, “You shall place in the Ark the ‘Testimony’ that I shall give to you.” [Shemos 25:16] The Luchos (Tablets of the Covenant) and the Master Sefer Torah were in the Aron.  When did they use that Sefer Torah?  The answer is, “Never!”  When did they see that Sefer Torah?  “Never!”  Who went into the Kodesh Kadashim (Holy of Holies)?  Only the Kohen Gadol (High Priest).  He did not open up the Aron and look at the Sefer Torah.

The answer is – No!  There is a Sefer Torah by which all other Sifrei Torah are measured.  Therefore, you can never falsify the Sefer Torah because there is a master copy that is in the Aron HaKodesh that was from the Ribono shel Olam, Himself.

This is the interpretation of the Medrash: “When Moshe found out that he was going to die that very day – what did he do?  Rav Yannai said he wrote 13 copies of the Sefer Torah – twelve copies he distributed to the twelve Tribes, and one copy he placed in the Aron HaKodesh.  Why?  Lest anyone think that he can change anything in the Sefer Torah – he needs to know that it will be validated against the Sefer Torah that Moshe himself wrote.  Every Tribe will be able to look at the alleged text of the falsified Torah and say “No.  This is wrong!  That is not what the Sefer Torah says.”  This is why we need a Sefer Torah in the Aron.

This insight was said over by Rav Zalman Sorotzkin, zt”l, [1881-1966] in the eulogy he gave for the Brisker Rav, zt”l [R. Yitzchok Zev Soloveitchik, 1886-1959].  The Brisker Rav was, l’havdil, “Le Grande K.”  When he represented Da’as Torah, he was not going to let anything be changed that was against Torah.  If it was, he stood up and he fought for it.  Everyone feared him, because he would not stand for any nonsense.

This is what every generation needs.  Every generation needs someone who people recognize will stand up for what is right and will not let anything false pass him by.  When Rav Weinberg, zichrono l’Vracha, was niftar, Rav Heinemann eulogized him and called him (rightly so) “Gavra d’mistafeena me-nay” (the individual who I feared).  He was the person in town from whom one had trepidation.  One understood that if he was going to try to change anything, Rav Weinberg was going to let him have it, in no uncertain terms.  He was fearless and peerless, and he did not take any garbage.