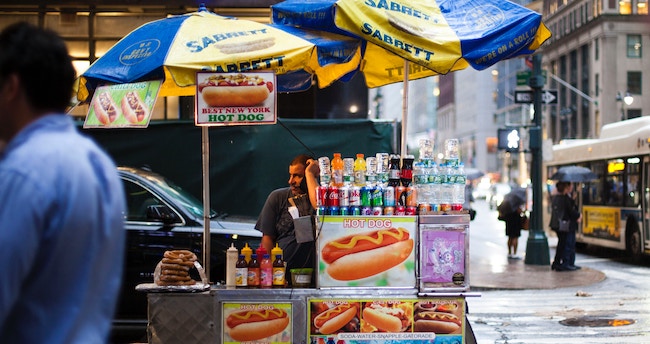 QUESTION 18: SHOULD YOU BELIEVE A STREET VENDOR WHO CLAIM’S HE’S SELLING STOLEN GOODS?

He’s pulling your leg when he says that he stole them. You asked, “How can they be so cheap?” He answered, “Oh, they’re stolen.” He said that to make them seem more attractive. You don’t have to believe him.

Is it permissible to jaywalk and to walk against a red light even though it is technically illegal?

Some people claim that dina d’malchusa dina (the law of the land), applies even to these issues. I think it all depends. When the streets are empty and there is no traffic — for cars it is considered a major offense to go through red lights even then. But for pedestrians, I don’t think the government is that concerned. But when there’s a lot of traffic, and people still walk in the street, and it makes your heart skip to see cars dodging the people, then it’s a terrible thing to do.

Is that a legal issue, or some other issue?

It is a legal issue, but it’s also a sakonah (danger)– you’re putting yourself in danger. The government has a right to be concerned about things like this, and you should be concerned as well.

NEXT WEEK’S QUESTION 20: HOW DOES ONE FACTOR IN THE POSSIBILITY OF CHILLUL HASHEM (PROFANING HASHEM’S NAME) WHEN THERE IS A SITUATION WHERE ONE SHOULD BE HONEST?

NEXT WEEEK’S QUESTION 21: RED LIGHT ON A DESERTED STREET

It is early in the morning, the streets are deserted, and I am rushing in my car to catch a bus, a minute away from missing it. When I’m a block away from the light, the light turns yellow, and then when I’m 15 feet from the light, it turns red. I look around and there are no cars or people. There are two ways of looking at this moment: the law is flexible, and I can go through the light because I almost got through the intersection before the light turned red, and there is no one around, and this is an emergency situation since there won’t be another bus for another 30 minutes. Or I can say this is a test to see how honest I am, to see how much I can withstand the temptations of dishonesty, because what is wrong is wrong and one who trusts in Hashem would believe that no good can come from going through a red light. What is the correct way to see the situation, and what is the correct way to act?