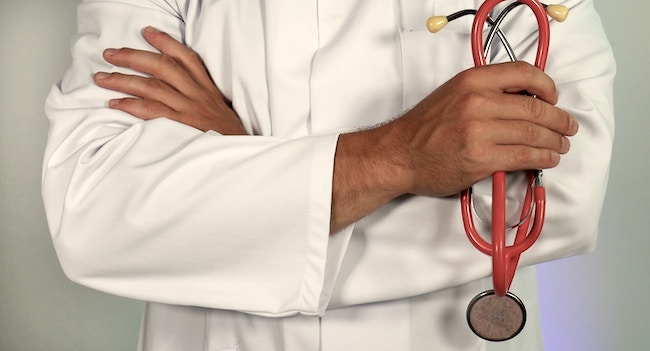 When our family goes to the doctor at the start of each year, we must pay a deductible amount, after which the insurance company pays most of the cost of the doctor visits. During the period before our deductible is reached, our family doctor lets us pay a portion of each visit now, with the intention that we will pay the rest later in the year – even though he reports the entire cost of the visit to the insurance company. If later in the year, he forgives us our debt, is that fraud?

It’s not fraud if he decided later to forgive the debt, because that’s his personal gift to your family. In other words, let’s say his price is $50 a visit, and that’s what he reported to the insurance company, and that’s what he would charge ordinarily, and what he did charge, except that some sort of payment plan was decided upon. And then when he decided to forgive it, that’s his personal decision. But this shouldn’t be done if he planned all this from the outset. These things are done all the time – people pad the bills and make believe that these are deductibles.

Perhaps I once told you the story I had with a deductible. Many years ago I took a car to a body shop that I had crashed. The car had collision insurance, but there was a $500 deductible. The damage was about $8,500. So what did the mechanic do? He padded the bill to $9,000; he got $8,500 from the insurance company and he told me to forget about the deductible.

I took the car home, and the next day, I started the car and it seemed to run, but there was a signal to go see the mechanic. I took it to the mechanic and he told me the computer in my car had been stolen (this was when they had just started putting computers in cars). I asked him how could it be stolen without breaking into the car. He said it’s possible … the thief stuck his head under the car and unscrewed the computer and took it out. I asked him how much it cost. The collision insurance didn’t cover this – it was theft. He told me it costs $500, exactly the amount of money that I had ‘saved’.

I felt very happy that at least the Ribono Shel Olam (G-d, literally Master of the world) didn’t let me hold on to the money that I shouldn’t keep – money that wasn’t mine. I should have paid the $500 to begin with, and the tainted money was cleared from my property.

You can’t l’chatchiloh (from the outset) pad the bills and make believe the deductible was taken care of. The action has to be legitimate, because that was the type of the insurance you bought. The insurance was like an item you purchased, that comes with certain rules and restrictions. However, if the action is legitimate, and the doctor forgives your debt, then there’s absolutely nothing wrong.

You’re really saying the law for the doctor – he can’t l’chatchiloh (from the outset) have this intention. But if he says to you, “Just pay me now,” and he has the intention to do this trick, what responsibility is it to you as a patient?

How do you really know? One thing is certain. You could tell him I’ll pay you later. I want to meet my deductible. Thank you very much. I’m paying $25 now, and I’ll pay you the rest later.

But let’s say you know that he has intentions to ‘help’ you later?

You can’t make up an explicit agreement with him to do such a thing. If it happened once, next year tell him, “Thank you, but I’d rather pay the whole thing.”

Even though the patient is only paying $50?

Right. If the $75 is a legitimate cost because the insurance company recognizes that as a legitimate price, there is a reasoning for leniency. But I don’t believe it is a correct one. The whole idea of deductibles is that you should pay a certain amount and have the rest be insured, It’s designed that way so as to avoid frivolous use of medical services. And that’s the amount and the type of insurance that you purchased. The insurance company knows it will cost them a certain amount if they insure fully, and the sale price of the policy is determined by that cost. If they insure it only beyond the deductible, it’s entirely different. It may then be primarily a ‘catastrophe’ policy meaning that maybe for a couple of years they’ll profit and then, should a catastrophic thing happen, they’ll pay a lot of money for it. If you end up getting more than you purchased, so it’s gezel (robbery) – taking more than you purchased.

Thus the various justifications concocted by logicians don’t address the real issue. I’ve told you many times that I feel a slight deviation from the regulations is not the thing that matters. The thing that bothers me all the time is when a person ends up taking something that’s not his. He paid for one thing and he takes more – with some kind of dreying mit dem grubben finger (figuratively: rationalizing to his advantage). Whether he ends up taking twice as much, or 2% over what he’s entitled to, is immaterial. It’s gezel (stealing). Perhaps gezel is more damaging when it’s accompanied by a ‘sevoro’ (reasoning) because it corrupts your power of reason, which is the holiest and most precious possession a person owns.

I once read an essay by Rav Shimon Schwab, zt”l, where he said that the whole role of the sitra achra (the evil inclination) is to entrap us into doing things just like this. Since I’ve read that essay, I’ve wondered if it is possible that giving into the temptation of krumkeit (crookedness) has a negative effect on our neshomah (soul).

But what if there’s a haromoh (trickery) going on?

The haromoh shouldn’t be done.

NEXT WEEK’S QUESTION 39: SELLER REVEALING FLAWS IN A HOUSE