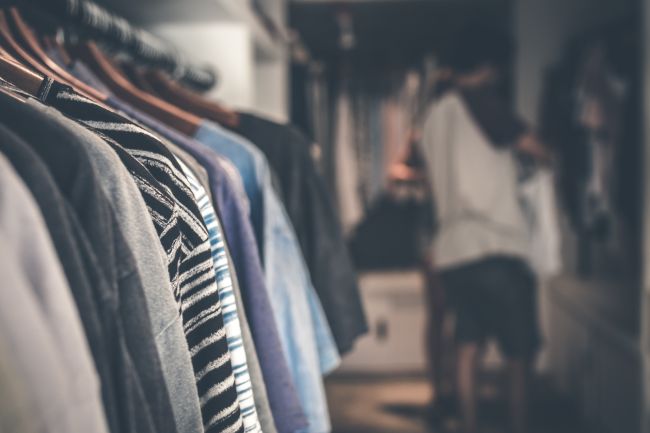 As I gained weight, I put aside some clothes to give to charity. I assumed that since the clothes did not fit me, I would not need them anymore. I felt that even if I might be able to wear them later, I would still buy new clothes. Several months later, I lost enough weight so that the clothes fit me again. I had never gotten around to giving the clothes away as intended from the beginning. I would like to now use at least some of the clothes. Am I allowed to wear the clothes temporarily until I give them away? Can I opt to not donate them at all, and wear them on a permanent basis?

This takes us to the very important question of what is considered a “thought of tzedakah (charity)”, a thought that requires a person to give tzedakah.

In most cases where a person makes a neder (vow), it is only valid if it is stated verbally. You have to actually express it with your mouth, and say the words. Otherwise, we consider it as if no vow has taken place.

One exception to this rule is tzedakah, where just by thinking about doing something without verbal expression can validate the vow. For example, if I decide in my mind to donate a dollar to tzedakah, I have no right to change my mind later and say I’m not going to, even if I never expressed my will verbally.

However, you’ve got to be very careful about this. Everyone at some point has some kind of fleeting thought, which, if considered to be binding, would have a lot of people in the poor house overnight! For example, let’s say a tzedakah collector passes by, and you suddenly think, “Oh, I’ve got to give him some money. He really needs it. I think I’ll give him a thousand dollars.” Shortly after, you start thinking in practical terms. A thousand dollars is too much, and you end up giving five dollars, which is still quite generous.

This fleeting surge of generosity does not necessarily establish that there was a determination to give charity, which would obligate you to give tzedakah. You have to have a carefully thought out decision that says: “I decided to do this, and that’s the end of it,” not any fleeting thought that happened to come to mind.

What does it mean when a person puts aside his clothes to give to charity? It could mean he actually thought the matter through and decided to give an unconditional donation to charity. In that case, it belongs to charity and he can’t take it back, even if he hasn’t donated it yet. It’s as if the tzedakah has a different owner. (Since the poor haven’t actually received the clothes yet, he could replace the “clothes donation” with a donation of money or something else of equal value, since the poor don’t actually own the actual clothing yet.)

However, we can also look at the situation differently. You gained weight and your clothes are too tight and don’t fit anymore. After the crushing disappointment of looking in the mirror, and being unhappy with the way you look, you suddenly decide you don’t want to look at your old clothes anymore. You think to yourself, “Hey, why not donate them to the poor . . .” It may be a momentary flash of generosity, but not a permanent decision. In that case, it would not be considered an actual donation.

Still, it’s very hard to decide. It’s very difficult to figure out exactly what’s going on in your mind at the time you made your decision. Sometimes, when it comes to giving money, for example, on reflection you realize your decision is totally unrealistic. Afterwards you assume that it was a generous intention that was just simply impractical. It’s just a flash of good feeling, but nothing more.

I would suggest that if you are faced with such a situation and if the clothes are valuable, go and discuss it with a very knowledgeable Rabbi, someone who could advise you properly, who would try to examine your intentions honestly and clearly. If there is any doubt, then it’s a sofek matnas aniyim (possible gift to the poor). It has to be determined if there is a real doubt, and not just a flimsy one-in-a-hundred chance that it wasn’t meant as a serious donation.

If there is a good chance that you were serious about the donation, then give the clothes to charity. In fact, if possible, reward yourself for having accomplished such a monumental feat of finally losing the weight, and get yourself some new clothes! But if you can’t afford it, then you have a problem.

Also, it’s possible to make a hatoras nedorim (nullification of vows) by which a person one can get his possible vow of giving annulled.

When the person actually put the items aside, there’s an actual act that took place. How important is the act of physically putting them aside?

That’s a good point. I considered this, but dismissed it as being a determining factor because you could assume he put the clothes aside because he couldn’t wear them anymore, not necessarily because he wanted to donate them. He just didn’t want them staring at him each time opened the closet and be insulted by the fact that he couldn’t fit into his old clothes anymore. It’s not so clear-cut as to what his intentions really were.

It may be very likely that it was a donation, and then can’t be retracted unless he has a hatoras nedorim (nullification of vows). Of course, to properly nullify a vow, one needs to do so in the presence of a Bais Din of three.

There is the concept of an “opening” (pesach), where if a person made a vow, he can annul the vow by saying to a Bais Din, “I didn’t realize what I was getting myself into because of such and such a reason.” The “opening” serves as an rationale for letting him get off the hook. Is the fact that at the time of setting aside the clothes, he thought he wasn’t going to lose weight, a legitimate “opening” (pesach)?

A “pesach” has to be something that he didn’t have a practical expectation of fulfilling. For example a legitimate pesach could be if he’s been trying for years to lose weight and he keeps failing, and so assumes it’s something he cannot do. And then he surprises himself and loses the weight! I think that in most cases the Rabbi who listens to him will probably be able to determine that this is a good pesach.

NEXT WEEK’S QUESTION 82: COPYING ONE’S OWN CD FOR SAFEKEEPING

Can I make a copy of my own CD or tape, and put it away, in case it breaks or gets lost?