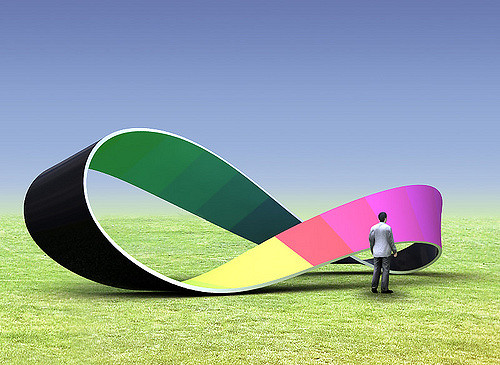 Any person whose character traits all fall in the center, midway between the extremes, is considered wise

Someone, however, who is extra careful with himself, distancing himself from the middle path a little to one side, is called a pious one (“chassid”). How is this? One who distances himself from haughtiness to the opposite extreme and is of extremely lowly spirit is considered pious. This is known as the way of piety (“middas chassidus”). If, alternatively, he distances himself from haughtiness only half way so that he is [merely] humble, he is considered wise. And this is known as the way of wisdom (“middas chachma”). This is true of all qualities. Now the pious ones of old (“chassidim ha’rishonim”) used to incline themselves towards one or the other extreme, and their behavior was considered beyond the letter of the law. Nevertheless, we are commanded to follow the middle path in life. This is the best and most upright way, as the verse states, “You shall follow in His ways” (Deut., 28:9).

This week the Rambam continues his discussion about the wisdom of following the middle path in life. In addition, he introduces a fascinating, almost amusing, counterpoint. As the Rambam concludes in Law 4 and again in Law 5, the middle path is the path of the wise. However, as he introduces in Law 5, there is another track — that of the pious. It’s not very smart — the Rambam clearly distinguishes it from the way of the “wise” — yet it is also valid in its own right.

Thus, the Rambam offers us two tracks in life. We can either be smart or we can be pious. Piety isn’t very “smart” from a rational standpoint, yet the “smart” way to live presumably isn’t all that pious. I actually feel this is kind of amusing — though perhaps undeniably true. What is this idea of having two choices in our service of G-d? Why not just present us the one “best” way? And most important, why is the most religious path in life the less intelligent one?

I believe there is a fascinating concept contained in today’s passage. There is no question that the most rational and intelligent path in life is the middle one. Living in moderation is the most sound and productive approach to life. Yet perhaps there is more to life than being so comfortable and correct all the time. Now and then something within ourselves cries out for more. We cannot be “average” all the time. We must from time to time do something special. We need to show G-d we love Him; we’ll go out on a limb for Him. We’ll go beyond what is rational and wise. In fact, we’ll act a little crazy for Him: we do love G-d, don’t we? Why, what kind of love is it if a person never does something crazy for the one he loves?

These I believe are the alternatives the Rambam sets before us. We can live wisely — living comfortably and within our means, maximizing ourselves, not stressing ourselves out too much, getting enough sleep at night, etc. Or we can live a little bit closer to the edge. Undertake to do a little more than we can handle for G-d: Give a little more charity than we can afford, stay up just a little too late at night in study, make your daily schedule just a little too full of studying and teaching G-d’s Torah.

A ready example of this phenomenon is the common practice nowadays of staying awake studying Torah the entire first night of Shavuos (the Feast of Weeks). Rationally speaking, staying awake all night is not smart. It wipes us out physically, perhaps for days to come. And the studying itself during the wee hours is hardly very productive; very little of it sticks with us. And all of this is to say nothing of those pathetic morning prayers we recite when it’s all over.

However, many good Jews (especially younger ones) will stay up year after year — and a good Jewish custom always has something to say for itself. And here too, perhaps the reason is exactly as we wrote above. Of course, rationally speaking staying awake all night is crazy. Yet perhaps once a year we should do something crazy for G-d. Shavuos is the holiday on which we stood before G-d at Mount Sinai and received His Torah. Shouldn’t we show G-d now and then that we’re so excited about receiving His Torah that we cannot sleep the night before? Aren’t we so anxious to study Torah that at least once in a while we’ll stay up too late with it?

The following incident occurred to me many years back when I was a student in yeshiva (rabbinical college). I had remained in yeshiva well into the summer — after many of my fellow students had left. Another fellow, whose roommates had all left, asked me to stop by his room in the morning to make sure he arose on time. (I used to go out a bit early.) Now this fellow was one of the brightest and most devoted students in the entire yeshiva. (Today I believe he’s in Jewish education, teaching in a very highly-regarded religious high school in New York.) So for a period of about two weeks, I would stop by his room every morning. Half of the time he had clearly just collapsed into bed — he was still fully dressed, including his shoes and glasses, the lights were still on, etc. (He did seem to make it to his room every night.)

That was clearly a man in love. He observed no “normal” schedule. He was driven by a passion for truth, for an understanding of G-d’s wisdom. Is that a “normal” way to live? Is it rational or recommendable? Of course not. Yet on the other hand, if a person never seems to be overcome by such a passion, one has to wonder if he truly is a seeker. Didn’t it happen at least once that we stayed up too late because we just had to finish a topic of Torah study? (We’ll do it for a gripping novel; why not the Torah?) Weren’t we at least once swept up by the importance of a charitable cause and found ourselves giving more than our means? Weren’t we ever brought to tears through our prayers? Again, the wise man lives in moderation and avoids extremes. Yet if someone never does something crazy for G-d, we really have to wonder if he truly cares about his beliefs.

Piety is of course not for all people and for all times. The wise man tempers his passions with moderation. Yet we must be certain that such passion exists within us. In certain areas we should perhaps be a little more fervent, and certain stages of our lives should see just a little more zeal. (It’s fairly common to see in the hallowed halls of our yeshivas younger students staying up to absurd hours studying (and then collapsing the rest of the day). When they’re older they’ll “outgrow” it and find the correct balance. But many students who will one day be great scholars go through that head-over-heels stage.) If you’re “normal” your entire life, you might be “wise”, but something is clearly not there. No religion is complete if it is nothing but rationality and sensibility — though that is so much what Judaism is about. For we’re not here just to live comfortably and properly in this world. Now and then we must go beyond.