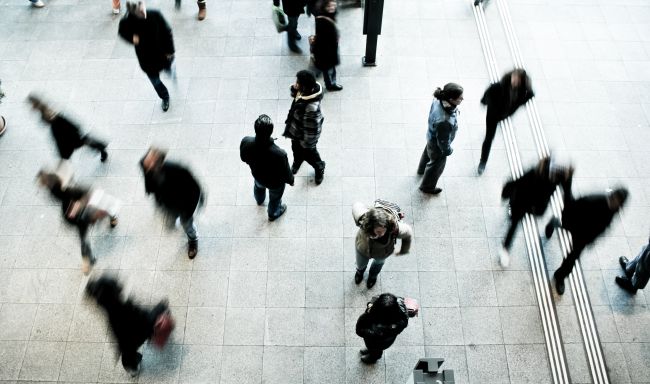 “The Torah scholar should not walk with erect stature and head held high (lit., ‘throat thrust out’) as it states ‘[…for the daughters of Zion are haughty,] and they walk with outstretched throats and gazing (or winking) eyes’ (Isaiah 3:16). He should not walk [in small, delicate steps, placing his] heel beside [his other foot’s] big toe, casually, as do women and the arrogant, as it states, ‘…walking and floating do they go, and with their legs they entice’ (ibid., end of verse).

“[The Torah scholar] should not run in public and act crazily.

“He should also not bend his stature [in exaggerated fashion] as a hunchback. Rather, he should look downwards [slightly] as one standing in prayer. And he should walk even-paced as one busy with his matters.

“Even from a person’s gait it is discernible if he is a scholar possessing wisdom or a madman and fool. So too did Solomon say in his wisdom, ‘Even along the way, as the fool walks, his heart is lacking and he proclaims to all he is a fool’ (Koheles (Ecclesiastes) 10:3). He informs all regarding himself that he is a fool.”

This week the Rambam continues the theme of this chapter, discussing the behavior appropriate for the Torah scholar. Here he discusses the scholar’s gait, and more generally his body language.

It’s interesting to note how much information people convey through body language — how much it tells about themselves and about their attitude towards whomever they’re dealing with. The Rambam likewise takes body language quite seriously, devoting a law of his work to the subject. He even takes the trouble to quote King Solomon as Scriptural backing for this phenomenon. How one carries himself makes a great difference. The true scholar must not only improve his mind and character; he must perfect his stride.

The Rambam began by describing the behavior of the wise. This is of course the most visible and salient aspect of the scholar’s composition, yet it is also the easiest part to fake. It’s not all that hard to basically despise the unlearned, yet to force oneself to act cordially in their presence. Speech, as we know, is much harder to control. We’ve all blurted out things we’ve regretted after, yet far less often do we stuff food into our mouths knowing it’s kosher before we can stop ourselves. I believe it was R. Yisrael Salanter, (1810-83, great Lithuanian scholar and ethicist, founder of the Mussar Movement), who bemoaned that people are far more scrupulous about what goes into their mouths than about what comes out.

Finally the Rambam moves on to the scholar’s gait and body motions. And this one is hardest of all to control. Clearly, a person can act a certain way and speak a certain way, but everyone around will know through his motions and facial expressions that he doesn’t really mean it. The most subtle aspects of our behavior often say the most about whom we actually are.

For that matter, graphology, the study of a person’s character and personality via his handwriting, is predicated on the belief that aspects of a person’s psyche surface in very slight variations in how he pens his letters. I’m certainly not writing this to offer my own uninformed opinion regarding the validity of this field. I personally tend to be very skeptical of what’s considered fringe science. Yet the underlying premise — that our slightest, least perceptible motions speak worlds about our true selves — is certainly quite plausible.

While I’m at it, I do have one telling anecdote of my own to offer. My teacher R. Yochanan Zweig once mentioned that he and a friend once brought a copy of the Rambam’s own handwriting to a world-renowned graphologist. (There are actually many existent samples of the Rambam’s personal writing, as Egypt’s dry climate allowed for the preservation of many medieval documents. That combined with the Rambam’s prolific writing habits and Israel’s custom not to discard virtually any Jewish writings, sacred or not, has provided us with a wealth of ancient Egyptian material, medieval and beyond. See any write-up on the Cairo geniza for more information about this phenomenon.)

Returning to my anecdote, the graphologist, who couldn’t even read Hebrew, made two observations regarding the Rambam, based on his handwriting: (1) He suffered from stomach ailments (which was true). (2) He was an extraordinarily organized person. That too was certainly on the money. Anyone who could take the entire gamut of Jewish law from all its varied sources and arrange it into an organized, readable body is virtually without match in the Jewish world (and in the entire world).

Genesis 27 describes the incident of Jacob posing as Esau in order to receive Isaac’s blessings in place of his undeserving brother. In doing so, say the Sages, Jacob nearly blew his cover. How? In part, in speaking nicely to his father, unlike the rough, brutish Esau. When Jacob first came before his father, he said “please sit up” (v. 19). By contrast, when the true Esau came in, he said “my father should get up” (v. 31). (See Rashi to v. 22.)

There are many significant issues here. The most important is, why didn’t Jacob, already physically disguised as Esau, also adopt his brother’s inconsiderate manner to complete the subterfuge? This actually provides an important key for truly understanding the episode. Jacob was not simply trying to “fake out” his father. He wanted to present himself as a composite personality, possessing both the brawn of Esau plus the good manners of Jacob. And such a person (whoever it was) was the true one worthy of Isaac’s blessings. This is a very rough outline of some of R. Yochanan Zweig’s important thoughts on the topic. It’s not our subject, but you can read a write-up of it here: http://www.aish.com/jl/b/eb/kbc/Jacob-vs-Esau-Part-I-The-Two-Roles.html.

I would, however, like to raise another issue, more germane to our current discussion. Esau, for all his faults, distinguished himself in one way. He exhibited enormous respect for his parents, especially for his father who favored him so. The Midrash praises Esau for serving his father only when attired in “royal clothes,” as a sign of respect (Bereishis Rabbah 65:16). (This even though Isaac was blind and couldn’t possibly have known the difference. It wasn’t for show. Esau really felt that way towards his father.)

If so, however, why didn’t Esau speak nicely to his father as well? We saw above that Isaac almost saw through Jacob’s cover because he failed to speak as coarsely as Esau. But if Esau really did treat his father so well, why did he not simply speak to him nicely too?

I once read or heard the following answer, though I can’t remember in whose name. A person’s speech is very internal to whom he actually is. It is very difficult to speak in a refined manner if that’s just not who you are. So too, Esau was easily able to dress a certain way when tending to his father. But to change his manner of speech was far less under his control.

This too is the basis for the recent laws in the Rambam. He first told the scholar how to act. He then moved on to the scholar’s speech and finally to the most internal expression of a person’s being: his body language. The more internal, the less conspicuous yet the more difficult to consciously control.

And obviously, the Rambam is not writing to instruct the scholar to become a really well-trained actor. The earlier laws regarding actions the sage-wannabe might have been able to fake. But now we are discussing the real essence of the scholar’s psyche. His Torah study must penetrate his core. He must actually be humble and caring, not carrying himself about as greater than the rest of us. Training himself will only go so far. At a point, the scholar must really believe it and must truly become a wonderful human being.