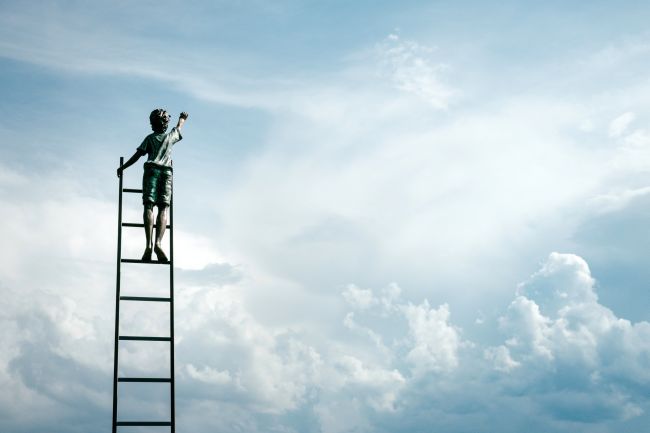 Chapter 4, Mishna 2: The Ladder of Life

“Ben (the son of) Azzai said: Run to perform [even] a minor mitzvah (commandment) and flee from sin, for one mitzvah leads to another mitzvah, and one sin leads to another sin; for the reward of a mitzvah is a mitzvah and the ‘reward’ of a sin is a sin.”

This mishna teaches us that one should be meticulous even in the observance of “small” mitzvos, and likewise should he run from all evil acts. One reason that comes to mind almost immediately is the fact that we should not be so quick to “rate” the mitzvos and pass judgment on their relative importance. Sometimes the smallest good deeds (at least from a technical standpoint) — such as singing songs at the Sabbath table, or preparing and eating an authentic Jewish dish — may generate that spark of interest in a child which only years later will be kindled into the huge blaze of an inspired Jewish heart.

(An experienced rabbi once remarked to me how such innocuous events as a challah-baking class have been known to generate incredible turn-outs . Certainly, there is far more to Judaism than ethnic culture and traditional food, but who knows where that crucial first step will lead?)

This concept — that it is beyond our ability to rate the mitzvos — was actually the subject of an earlier mishna — 2:1 (part 2). Feel free to review our discussion there.

Here Ben Azzai approaches this topic from a different angle — the cause-and-effect nature of both good and bad deeds. His first reason not to underrate minor mitzvos is because one mitzvah leads to (lit., “drags along”) another. This means that doing one mitzvah will ready and condition us to do greater mitzvos. One good act, no matter how small, makes an imprint upon us. Giving a nickel or dime at the cash register to cure heart disease may make very little difference to the recipient organization (although, of course, every dime adds up), but it makes a difference to us — as well as to our children who observe us so keenly. It will transform us into more charitable individuals, and the next time parting with our money will be that much easier. We will have readied ourselves for bigger and greater challenges.

Likewise, a person who has accustomed himself to attend afternoon synagogue services regularly will be capable of doing so even at the height of the football season — when it involves pulling himself away from the boob-tube just at the start of the fourth quarter. (He may even be more the “strong man” than the 280 pound hulks he’s viewing — see previous mishna.) 😉 Such a person has properly conditioned himself to serve G-d. His level of challenge has progressed beyond “Will he go to synagogue?” and certainly beyond “Will he pray?” He is ready to serve G-d in increasingly more challenging — and more rewarding — ways.

The same unfortunately holds true regarding evil: one sin leads to another. If a person commits a certain type of sin one time — say one he has never done before — he will feel guilty. The next time, however, he will not feel that same tinge of regret. He may then slip another rung and sin in a slightly bigger way — partly because he’s developed an appetite for that type of behavior and partly because it’s only one *more* small step from where he now is.

The Talmud teaches that if one sins and repeats it, the sin becomes “permissible” to him (Sotah 22a). It has just lost its severity, its taboo. He wasn’t struck by lightning. Nothing seems to have changed; the world goes on.

R. Yisrael Salanter, one of the great scholars and ethicists of the 19th Century, commented on the above Talmudic passage: Say one commits the same sin a third time? What then? Why then it becomes a mitzvah! We get so used to ourselves and our behavior — not to mention our need for self-justification — that we will no longer see any wrong in our failings. That angry streak, cynicism, loose tongue etc. — they’re all necessary to stand up for our rights, hold our own, get on with our friends etc. Slowly, our evil inclination whittles us down, and what was once unimaginable and unthinkable becomes routine and unthinking.

Many years ago a non-Jewish friend of mine told me the following incident. He was busy working in his office on one of the days of Passover, munching on a bag of pretzels (well, I said he wasn’t Jewish!). In the hall he passed by a Jewess, an exceptionally nice, fairly traditional lady in her forties. He, in complete innocence (not realizing that pretzels too are “leaven”), held out the bag to offer her a few. She hesitated at first, then said, “Oh well, I already blew it when I had that Egg McMuffin the other day!” and helped herself.

Humorous in a sad sort of way, but also very telling. What was this woman’s error? It was in feeling that once she ruined her streak, there was no point continuing. I would wager that her primary motivation for observing the commandments was nostalgia and fond childhood memories. Once the fond memories became tarnished, the sense of nostalgia quickly faded, and she was left with little else drawing her towards observance.

The truth, however, is that deeds — both good and bad — must be seen in their proper light. If a person slips one time and sins, he has failed in a single way on a single occasion. It will take him more effort to correct his new failing, but one failure must not be viewed as any more than it is. Such a person has slipped a single rung on the ladder of life. He is, however, still on the ladder — and must view himself as such. G-d does not give up on us because of one sin — or even very many sins.

In a related vein, we can only expect to climb the ladder one rung at a time. It is not realistic or practical to attempt to reach the top without slowly and painstakingly edging our way forwards — and sometimes even resting a little on a middle rung. G-d presented us with the ladder. We must first recognize that it is there and that we are on it. Only then can we decide in which direction to go.

The second reason Ben Azzai offers for valuing minor mitzvos is because the reward for performing a mitzvah is another mitzvah. If we perform one good deed, G-d will reward us by providing us with opportunities to do yet other mitzvos. Deuteronomy 22:6-7 instructs that before taking eggs or chicks from a nest one must first send away the mother bird. The subsequent verses (8-11) discuss a number of laws relating to property and acquisitions — building a railing around the (accessible) roof of a house, laws relating to planting and working fields, and the restriction on wearing clothes containing mixtures of wool and linen. The Midrash (brought in Rashi to v. 8) explains the connection: One who fulfills the first mitzvah of sending away the mother bird — as easy and effortless as that is — will later find himself building a new house and acquiring new fields, vineyards and clothes. He will then merit to perform the many mitzvos associated with these items.

To some extent, this principle is simply a gift from heaven. G-d rewards us for performing the first mitzvah by putting us in the right place at the right time, affording us opportunities to do yet more mitzvos.

But there is also a pattern to this. When a person shows G-d he is prepared to serve Him any way he or she can, G-d takes note of His faithful servant. When there are jobs to be done G-d knows whom He can trust. We’ve all seen people who seem to have the uncanny ability of always being around when help is needed or a worthy project is getting underway. Their name always seems to come up. And G-d wills it that way. When we show our readiness, G-d will see to it that the opportunities come — and likewise He will find us worthy of being entrusted with wealth and other blessings. As a former student of mine appends to her e-mails, “When the student is ready, the teacher appears.” The more we prepare ourselves, the more we show our willingness to take that critical first step, the more G-d will reciprocate — and reward in kind.