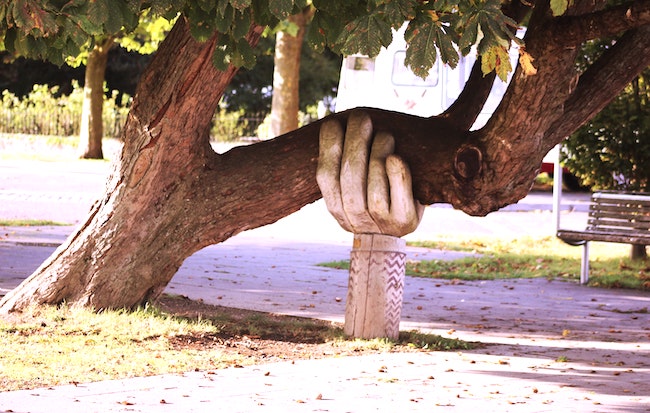 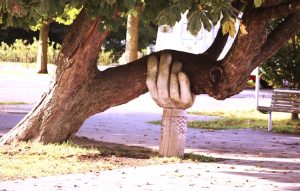 The Aron Kodesh in the Mishkan, the Tabernacle, contained the most precious spiritual gift that was transmitted by Omnipotent to mortal – the two Luchos – the Tablets handed from Hashem to Moshe at Sinai. The receptacle had to be worthy of the insert. It therefore had to be intricately constructed with it symbolism as meticulously configured as its beautiful design. The Aron consisted of three contiguous boxes of gold, wood, and gold, each inserted in the other. It contained a golden crown bordering it’s edge and a golden cover adorned with cherubim. These angelic figures faced each other, their wings spread, as they represented the profound love of a nation and their Creator.

But a seemingly insignificant item which was connected with the Aron holds perhaps the most symbolic of all the many peripheral adornments. The Torah tells us that the Aron was to be fitted with gold plated wooden staves. Then Moshe is told, “You shall insert the staves in the rings on the ark, with which to carry the ark” (Exodus 25:13). The Torah goes on to state: “The staves shall remain in the ark; they shall not be removed” (Exodus 25:14). The sages explain that the Torah is thus meting a prohibition for anyone to remove the staves that were used to carry the ark from place to place in the Jewish sojourn in the desert and beyond. What needs examination, however, is the phraseology of the command. When referring to the staves, instead of commanding, “You shall not remove them,” the Torah is seemingly prophesizing, “they shall not be removed.” Why didn’t the Torah just command, “the staves shall remain in the ark; you shall not remove them”? By stating, “they shall not be removed” it seems that instead of talking to us – the Torah is talking to history. Can it be that the Torah is foreshadowing the relationship between the Holy Ark itself and the staves that carry it? What important symbolism do the staves bear that intrinsically connects them with the Holy Ark they are meant to support? Can insignificant staves actually become part and parcel of the arks very essence?

During World War II many young Jewish children were harbored by a myriad of monasteries throughout Europe. At the end of the war, the Vaad Hatzalah sent representatives to the monasteries to try and reclaim the orphaned children to their heritage. Many of the children who found refuge did so at a young age and they had but a few recollections of their birthright.

When Rabbi Eliezer Silver, who was the Rabbi of Cincinnati, Ohio and a very influential member of the Vaad, came to a particular hermitage in the Alsace-Lorraine region of France, he was met with hostility. “You can be sure, Rabbi, if we had Jews here we would surely hand them back to you immediately!” exclaimed the monk in charge. “However, unfortunately for you, we have no Jewish children here.”

Rabbi Silver had been told that there were definitely close to ten Jewish children in that hermitage and was not convinced. He asked if he could say a few words to the children as they went to sleep. The monk agreed. Rabbi Silver returned later that evening with two aides, and as the children were lying in their beds about to go to sleep, they entered the large dorm room.

He walked into the room and in the sing-song that is so familiar to hundreds of thousands of Jewish children across the globe he began to sing “Shema Yisrael Ado…” unexpectedly — in mid sentence — he stopped. Suddenly from six beds in the room the ending to that most powerful verse resounded almost in unison. “Hashem Echad!”

He turned to the priest. “These are our children. We will take them now!”

The children were redeemed, placed in Jewish homes, and raised as leaders of our community.

The wooden staves that are adapted to carry the message of Torah, the tunes, the customs, and the small nuances, are much more than gold-plated sticks. They may not be as holy as the ark, but they will never leave its sides. They will be remembered long after the Aron has been captured. They will be cherished long after the golden ark has been buried. And it may very well be that when the cherished handles of those staves, jutting ever so slightly from the ground, are pulled from the mire, the entire Torah is eventually raised with them.

Dedicated in memory of our grandmother, Chai bat Samuel Libkind This dedication is in conjuction with her Yartzeit, by her loving children and grandchildren, Vladimir, Zhanna, Alex & Miriam Libkind, and Sveta & Victor Svirnovsky.