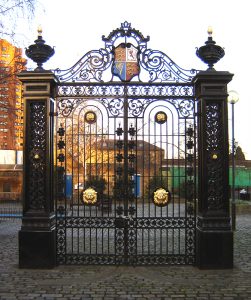 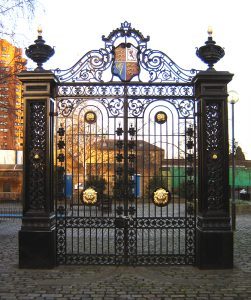 Our parashah, which is always read in the month of Elul preceding the Days of Judgment, begins: “Judges and officers you shall appoint at all your gates–which Hashem, your Elokim, gives you–for your tribes; and they shall judge the people with righteous judgment.” R’ Levi Yitzchak of Berditchev z”l (1740-1809; early Chassidic Rebbe) writes that this verse is offering us a recipe for a successful judgment on Rosh Hashanah. Hashem wants to judge us mercifully, but we must allow Him to do so. When we behave with kindness and judge our fellow Jews favorably, we awaken Hashem’s kindness, so that He can judge us the same way. Through such behavior, we open the “gates” of Heavenly kindness, allowing blessing to flow to all of the Jewish People.

This, writes R’ Levi Yitzchak, is the lesson of our verse: You will appoint the judges and officers who determine your fate on Rosh Hashanah by choosing your gates, i.e., choosing which gates you will open. How? By judging all of the people with righteous judgment, i.e., by always seeing the righteousness of others and judging them favorably. (Kedushat Levi)

A related thought from the anonymous 13th century work Sefer Ha’chinuch (Mitzvah 171): Our Sages teach that man is measured by his own measuring stick. However, the author continues, this teaching is misunderstood. It does not mean that Hashem looks at how man behaves and responds accordingly. That is a human trait. Rather, through his own actions, man makes himself into a receptacle to receive reward or punishment.

Rashi quotes a Midrash: “This [the word ‘ascend’] teaches that the Temple was situated higher than all other places.”

R’ Elya Meir Bloch z”l (1894-1955; founder and Rosh Yeshiva of Telshe in Cleveland) observes: Of course, we know that there are taller mountains than Har Ha’moriah, where the Temple stood. What the Midrash means is that because the earth is a sphere, any point can be designated as “the highest point.” Har Ha’moriah deserves that designation because it is the holiest point in the world, and it is the place to which all people ascend to experience spiritual growth. (Peninei Da’at)

“You shall do to him as he conspired to do to his fellow, and you shall destroy the evil from your midst.” (19:19)

This verse speaks of an Eid Zomeim / a person who testifies falsely in Bet Din that he witnessed an event when, in fact, there are witnesses that he was somewhere else at the time of the event. The Halachah regarding such a person is that the punishment or consequence that he tried to impose on the defendant is imposed on him instead, but only if the defendant’s sentence was not yet carried out.

R’ Chaim Friedlander z”l (1923-1986; Mashgiach Ruchani of the Ponovezh Yeshiva) writes: Commentaries note that this is counter-intuitive. We would have thought that a false witness who successfully caused another person to be harmed should be punished more severely than one whose plans did not succeed!

R’ Friedlander explains, based on the writings of R’ Yehuda Loewe z”l (Maharal of Prague; died 1609) that the Torah is teaching us the power of a person’s thoughts. When a false witness has a thought that someone should receive the punishment of lashes, for example, that thought must be fulfilled somehow. When it is not fulfilled against the intended victim, it is fulfilled against the false witness himself. We find this idea in Megilat Esther (9:25), “When she [Esther] appeared before the King, he commanded by means of letters that the wicked scheme, which [Haman] had devised against the Jews, should recoil on his own head; and they hanged him and his sons on the gallows.” On the other hand, once the thought has been fulfilled, i.e., if the false testimony succeeded, the original thought no longer exists. [Of course, Hashem has other ways of punishing the false witness.] The lesson for us, however, is that a person’s thoughts are very powerful. Therefore, in addition to controlling one’s deeds and one’s words, one is required to control his thoughts as well. (Siftei Chaim: Mo’adim III p.7)

“And who is the man who has planted a vineyard and not redeemed it? Let him go and return to his house, lest he die in the war and another man will redeem it.” (20:6)

The classical Aramaic translation Targum Yonatan interprets: “Let him go home from war lest the sin of not redeeming the vineyard cause him to be killed in battle.”

[During the first three years after a tree or vine is planted, the fruits are Orlah, and no benefit may be derived from them. In the fourth year, the fruit is called Revai, and it may be eaten only in Yerushalayim. If there are too many fruits to transport, one redeems them and takes the money to Yerushalayim to buy food there.] R’ Yosef Shalom Elyashiv z”l (1910-2012; Yerushalayim) observes: We would have thought that redeeming the fruits of a four-year old vineyard is optional. If one wants to eat the fruit, that is the procedure he must follow; if not, he can let the fruits rot on the vine. However, Targum Yonatan is teaching us that this is not the case. Rather, redeeming the fruits is itself a Mitzvah, and a person who neglects that Mitzvah is liable to be punished; even to die in battle.

What is the purpose of such a Mitzvah? R’ Elyashiv explains: The Gemara notes the similarity between the Hebrew word for redeeming the fruits (“Chillul”) and the Hebrew word for “praise” (“Hallel”). The message for us is that a person who plants a vineyard should see the act of Chillul as a time for Hallel – giving praise to Hashem for the vineyard and its produce. Thus, one who fails to perform Chillul has squandered a valuable religious opportunity, and it is understandable that he would be in danger. (Shiurei Maran Ha’Grish Elyashiv: Berachot 35a [p. 364])

“The voice of your lookouts, they have raised a voice, together shall they sing glad song, for every eye shall see when Hashem returns to Zion.” (From the Haftarah – Yeshayah 52:8)

The Gemara (Berachot 12b) teaches that the Exodus must be remembered every day and that, even after Mashiach has come, we still will remember the Exodus. R’ Yitzchak Isaac Chaver z”l (1789-1852; rabbi of Suvalk, Lithuania) explains: The Exodus is the foundation of our Emunah, for it was then that the Chosen Nation was imbued with the spiritual attributes that are passed down from generation to generation. Even in times of exile, some “impression” from that influence can be seen.

In particular, at the time of the Exodus we became a nation with which Hashem interacts directly, outside of the laws of nature. This relationship is, for the most part, hidden now, but, at the time of the future redemption, it will be obvious; “for every eye shall see when Hashem returns to Zion.” (Haggadah Shel Pesach Yad Mitzrayim: Potei’ach Yad)

Elul: An Auspicious Time for Teshuvah

R’ Ehud Rakovski-Avitzedek shlita (Yerushalayim) writes: The month of Elul and the Ten Days of Repentance are auspicious times set aside for Teshuvah. This requires explanation, however, for our Sages teach (Pesachim 54a; Mesilat Yesharim ch.4) that the possibility of Teshuvah is a necessary prerequisite for the Creation and continued existence of the world. And, we know that G-d’s Will is unchanging! As such, what does it mean that there is a special time for repentance?

R’ Rakovski answers: Hashem does not become more receptive to our repentance during this season. Rather, as beings who are subject to time, we need a special time when we are more open to receiving the flow of goodness, the blessing of repentance, that flows from Hashem at all times. As finite beings, we cannot relate to something that is infinite.

Why Elul? R’ Rakovski explains: A Ba’al Teshuvah / person who has repented is a new person. In the words of the prophet Yechezkel (33:26), he has a “new heart and a new spirit.” Similarly, R’ Moshe ben Maimon z”l (Rambam; 1135-1204; Spain and Egypt) writes that a penitent must change his ways so that he can say, “I am not the same person who did those things.” And, Rabbeinu Yonah Gerondi z”l (Spain; died 1263) writes: “He should cast off all of his sins and make himself as if he was born today.”

R’ Rakovski continues: We say in the Rosh Hashanah prayers: “This day is the beginning of Your handiwork,” i.e., of Creation. If Rosh Hashanah is the anniversary of Creation, then Elul, which precedes Rosh Hashanah, is the period before Creation. Hashem, so-to-speak, planned Creation during Elul. And, say our Sages, “Teshuvah was created before Creation.” Since Hashem created man with a propensity to sin, the world could not exist if the possibility of repentance did not also exist. Thus, Teshuvah was created during Elul, before the world was created, and that is when we are receptive to it. Man’s renewal belongs in the time period when the world itself became new. (Da’at Mo’ed)