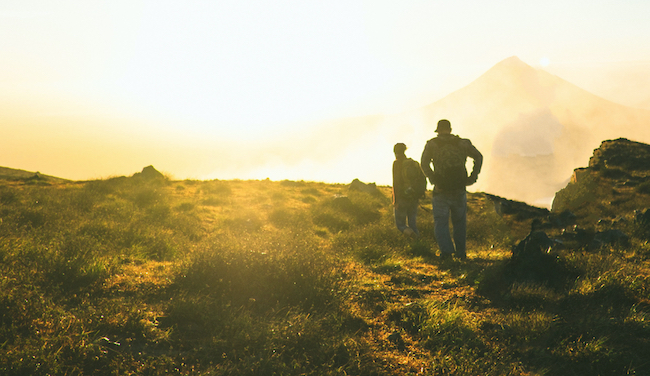 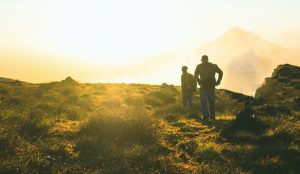 What thoughts passed through Abraham’s mind as he walked towards the mountaintop with his son Isaac? Childless until the age of one hundred, Abraham and Sarah had finally been blessed with a son, and now, Hashem had commanded Abraham to bind his beloved son on the altar and sacrifice him. In this, the supreme test of his loyalty and devotion, Abraham did not hesitate for a moment, and we his descendants still reap the benefits to this very day.

But let us consider for a moment Abraham’s state of mind on that fateful day. Was his heart gripped by the icy fingers of dread? Did he cringe at the thought of touching the sharp blade to the tender skin of his son’s throat? Did he despair at the thought of a lonely future with no fitting heir to take his place?

Not at all. As Abraham and Isaac set out for the mountain, the Torah tells us, “Vayeilchu shneihem yachdav. The two of them went together.” What does this mean? Our Sages see this as a metaphor for the feelings in their hearts, which beat together as one. Abraham fully shared the joyous anticipation experienced by Isaac, who was as yet oblivious to the true purpose of the journey. The enormity of what he was about to do did not becloud Abraham’s mind and heart. On the contrary, it exhilarated him.

Abraham had attained the highest levels of faith. He had so completely subordinated his own desires to the divine will that nothing existed for him but Hashem’s command. Therefore, in his understanding, how could an action that fulfilled the will of Hashem inspire anything but perfect joy?

And how about Isaac? What was the level of his faith? We need look just a little further in the parashah to find the answer. As they travel towards the mountaintop, Isaac questions his father about the whereabouts of the sacrificial lamb. From Abraham’s response, it becomes apparent that Isaac himself is to fill that role. And again the Torah tells us, “Vayeilchu shneihem yachdav. The two of them went together.” Their hearts still beat together as one. Isaac not only accepts his divinely ordained fate, he faces it with joy equal to that of his father.

But perhaps the most startling insight into the character of the patriarchs comes at the very end of this astonishing episode. The angel has stopped Abraham’s hand even as it already held the slaughtering knife. Hashem has acknowledged Abraham’s supreme faith and showered eternal blessings upon him and his offspring. We can well imagine the transcendent ecstasy that gripped Abraham and Isaac in the aftermath of this incredible spiritual experience. And yet, when they return to the young attendants waiting with the donkeys in the distance, the Torah again tells us, “Vayeilchu yachdav. They went together.” Together in spirit as in body, the commentators observe.

Abraham and Isaac did not feel themselves suddenly vastly superior because of the miracles they had witnessed and the promises they received. They took no personal credit for their stellar achievements and considered themselves no more or less precious than any of the Hashem’s other creatures.

A man once visited a great sage. “I have finished the entire Talmud,” he boasted.

“Indeed?” said the sage. “Apparently, it has taught you nothing.”

“What do you mean?” the startled man stammered.

“When a man discovers the vast ocean of the Talmud,” replied the sage, “when it dawns on him that in an entire lifetime he can expect to do no more than scratch the surface, he is immediately overwhelmed by the extent of his own ignorance. But you seem quite pleased with yourself. Where is your humility? Where is your awe? I don’t think you have the faintest idea of what the Talmud is all about!”

The outstanding spiritual achievements of the patriarchs and their extreme humility present no paradox. Quite the contrary. As they became more and more aware of the awesome and infinite Presence of the Almighty, their own sense of self diminished proportionately, and consequently, their humility was a direct result of their spiritual growth.

In our own lives, we can use our own humility as a measure of our spiritual growth. As long we fell smug and self-satisfied by the good deeds we accumulate and the advances in our level of learning, we can be sure that our growth is essentially superficial. But when we begin to feel dazzled and dwarfed by the spiritual vistas that open before us, when our new understanding and experiences make us shrink inside with a sudden sense of inadequacy, then and only then do we know that we are on the path of true spiritual growth. Text Copyright © 2007 by Rabbi Naftali Reich and Torah.org.