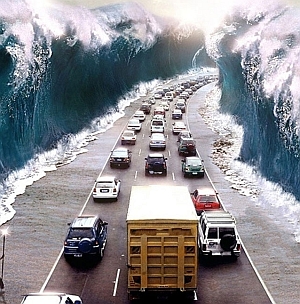 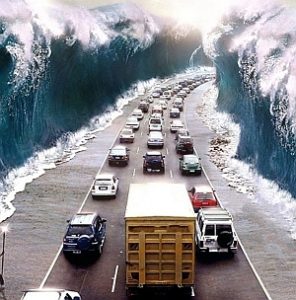 Hashem said to Moshe and Aharon, “Take handfuls of furnace soot. Moshe shall throw it heavenward…and it will become dust upon the entire land.”[2]

No simple miracle, if there is such a thing. Rashi teases out the multiple levels of the miraculous. To throw with force, you use one hand, rather than two. Here, Moshe somehow had to contain the handfuls of himself and his brother in one hand, and throw them. And, however he solved that problem, and however much force he applied, the soot had to reach the entire expanse of Egypt! Quite a feat!

Immediately, we begin thinking. Why? Why were the miracles-within-miracles necessary? How did they support the objective of tightening the screws on the Egyptians, on continually upping the ante until Paroh would let the Bnei Yisrael go?

The question is based on a fallacy. The objective of the miracles was not freedom for the Jews. It was to demonstrate the nature of the miraculous.

Standing smack at the core of things is the realization that the world, at its essence, is spiritual. The world that we observe, that appears “real” to us, is but a projection of reality, an image that can be visible to our fleshy eyes. What you see is not really what there is.

We see hints of this even as we examine the physical world, the “real” world that we are accustomed to engaging. Whatever we see is composite. Everything can be broken down into simpler substances. When we get to the smallest levels that we can deal with, our work just begins. As small as these substances get, we realize that they, too, are composed of still smaller substances. The search for the truly most elementary substances – sub-particles, quarks, whatever you wish to call them – has not ended. So far, everything that we engage is composite, complexes of simpler building blocks.

Conceptually to us as Jews, we know that the simplest LEGO piece in our universe is ruchniyus. In earlier times people referred to the simplest core element as hyle, and called it the smallest, most refined chomer/substance. We needn’t see it as substance at all. We are correct if we just call it ruchniyus. We needn’t worry about its physical properties, understand its behavior, or ponder how it works. We’re not going to figure it out. We don’t live and think as purely spiritual beings, and can’t fully relate to abstract spirituality. We just need to know that it is the basis of all that we observe. It is the basic stuff from which all is formed.

We speak of teva/nature and l’maalah min hateva/the metaphysical as if they were two different things. They are not. At the core of everything is ruchniyus. If we had to chose which one is the “real” reality, we would have to say that it is the l’maalah min hateva. It is closer to the ruchniyus core. Everything we see as teva is mired in the physical, which is the opposite of the spiritual.

Chazal[3] speak of the “condition” under which the Reed Sea was created: that it would split at the appropriate moment for the Bnei Yisrael fleeing the Egyptians. Rav Yirmiya ben Elazar adds that this condition was not unique to the Yam Suf. It was made with everything created in the six days of Creation. The sun and moon would have to stand still for Yehoshua. The ravens would have to bring food to Eliyahu when he had to flee to the wilderness. This large-scale linkage of the miraculous with the ordinary is simply another expression of the essential identity of teva with beyond- teva. There is no real difference between them, at least at their spiritual roots.

We often react to the miracles of Tanach with questions. When the road shrank in front of Yaakov, what happened to other people who were on the road? How could that really work? We start conjuring up ideas as to how the miracle happened. Maybe angels lifted Yaakov and transported him, and the road did not technically have to shrink? In places that Chazal tell us that a small area was able to hold a miraculously large number of people, we rack our brains trying to find images that accord with our sense of reality. There is no need to do this; it is an error. Instead, we should realize that the world of teva – the only one within which our minds work – is a poor reflection of the ultimate reality of the spiritual core of everything. From the perspective of that spiritual core, there are no contradictions, and no questions. And no surprises in finding that the miracles of Mitzrayim contained seemingly “unnecessary” overrides of the laws of nature.

The Chasid Yaavetz taught that there is really nothing surprising in Moshe’s mastery of all of Creation that he displayed in performing the miracles in Egypt. That should be expected. The real surprise is that we cannot do the same. How did the rest of us manage to fall so short of that mark? What became of our connection with Hashem? The true, sad, miracle is that we once had the ability to see the unity of nature and beyond-nature – and we let go of it.