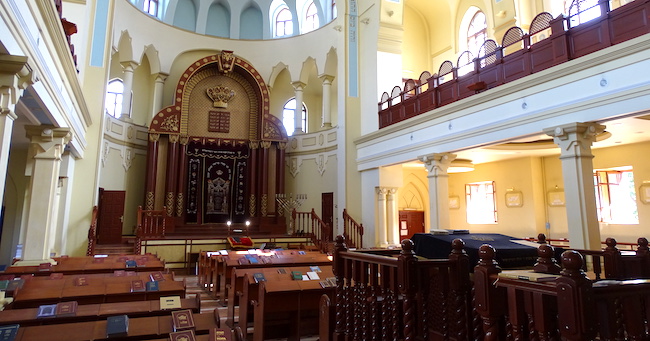 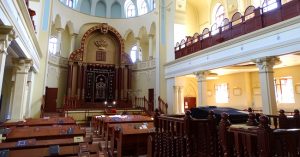 DAVENING WAS INSTITUTED BY OUR FATHERS (Berachos 26b)

Which customs should one follow when davening in a shul where the nusach and customs are different from his own? While many people are faced with this issue only occasionally, others must contend with it on a daily basis. Often, the only available [or the most accessible] shul is one that davens a different nusach from one’s own. It is difficult and uncomfortable for a person who is accustomed to daven in a certain way to suddenly daven in a nusach with which he is unfamiliar. In addition, it is a general rule that one should not deviate from the customs handed down to him by his parents and grandparents. But the halachah may require one to daven according to the nusach of the congregation where he finds himself regardless of personal considerations. Let us, therefore, examine the sources before resolving these conflicting demands.

A terse command in Parashas Re’eh(1), Lo sisgodedu, is interpreted by the Sages as Lo sa’asu agudos agudos, do not splinter off into separate groups that perform mitzvos and serve Hashem in different, somewhat conflicting ways. The Talmud discusses the nature of this prohibition. Abayei maintains that Lo sisgodedu applies when two different batei dinim in one city issue conflicting rulings. This makes the one Torah that was received at Sinai appear as if it were “two Torahs”(2) and causes confusion and discord3. Rava, however, does not object to different batei dinim – even in the same city – issuing contradictory rulings, since it is within the very nature of the Torah that different rulings will be rendered by different schools of thought, as Beis Shamai and Beis Hillel did for many years. In Rava’s opinion, the prohibition of Lo sisgodedu is meant to discourage one beis din from rendering a split decision. For the reasons stated above, the Torah did not want different factions of one beis din to issue conflicting opinions, giving people a choice of which ruling to follow.

We find in halachic literature that Lo sisgodedu applies even to deviations from mere custom, not only from prohibitions and rulings of a beis din. Rama(4), for instance, rules that during the Sefirah mourning period observed between Pesach and Shevous, all members of a community should follow the same custom and observe the mourning restrictions during the same time period. Chayei Adam(5) rules that that in a minyan reciting Tachanun, the practice of nefilas apayim should be done in a uniform manner, all using either the right or the left arm.This application of Lo sisgodedu is hotly debated by the poskim. Many are of the opinion that it does not apply in these situations at all. They base their reasoning on some of the following arguments: Lo sisgodedu applies only when a scholar instructs his followers to deviate from local custom(6); it applies only to prohibitions, not to mere customs(7); minor differences, such as different nuschaos, are not significant enough to invoke Lo sisgodedu(8); it concerns only different actions, not different words(9). But other poskim take a more stringent approach; in their view any deviation from the accepted custom, as minor as it may seem, may constitute Lo sisgodedu(10). While the Mishnah Berurah does not discuss the particular question of nuschaos, his rulings on related issues(11) point to a stringent view on this subject.

In pre-war Europe, Lo sisgodedu was much more of an issue than it is today. Most communities, especially in the small towns and villages, had only one Rav and one local custom, and individuals who practiced their own customs while disregarding local practice may have possibly transgressed Lo sisgodedu. But nowadays when there are many shuls and Rabbis in every city each following ancestral tradition, the situation is similar to the case of two batei dinim in one city where Lo sisgodedu does not apply(12) [according to Rava’s opinion(13)]. Still, it is possible that within the confines of a single congregation, e.g., when an individual davens in a nusach which is different from that of the congregation’s, Lo sisgodedu may still apply.

But even in situations where the Biblical prohibition of Lo sisgodedu does not apply, we still find(14) an additional exhortation – this one established by Rabbinical edict – which calls for uniformity within the same congregation: Le’olam al yeshaneh adam mi-pnei ha-machlokes – One should never deviate [from local custom] because it leads to discord. As the Vilna Gaon warned(15): “Differences in customs lead to differences of the hearts.” Practicing different customs, even minor ones, could lead to strife and discord.

Harav M. Feinstein was asked numerous times for his opinion on this matter. For reasons which are not completely clear, he did not always give the same response. Basically, though, he was unsure if the Biblical prohibition of Lo sisgodedu applied to the question of different nuschaos – but the Rabbinical edict against deviating from local custom was definitely relevant. Usually, he advised that the local custom be strictly upheld, unless the individual could keep his practiced undetected by others in the shul. The following is a digest of the guidelines that Harav Feinstein offered on this subject and its specific applications [see footnotes for the opinions of some other poskim]:

Any part of davening, e.g., Shemoneh Esrei, which is normally recited in an undertone may be recited in one’s own nusach(16).

Preferably, Pesukei d’Zimrah and Birchos Kerias Shema should be recited according to the nusach of the minyan, since they are sometimes recited out loud. If, however, it is difficult for one to change from his own nusach, they may be recited in one’s own nusach provided that they are said in an undertone(17).

Kedushah or any other part of davening which requires a minyan should be recited according to the nusach of the minyan, even if it is recited in an undertone(18).

Viduy and the Thirteen Midos should be recited with the congregation before Tachanun, even if one’s own custom is not to do so(19).

One may recite Viduy in an undertone in a shul that does not recite Viduy, but one may not strike his chest as he usually does. The Thirteen Midos cannot be recited, since a minyan is required to recite them(20).

A sheliach tzibbur must always daven according to the nusach of the tzibbur, even while reciting his own silent Shemoneh Esrei(21).

One who follows the view of the poskim that yire’u eineinu is not recited at the nightly Ma’ariv, need not recite it with the congregation if the people around him will not notice his omission(23).

If the officers and members of a shul do not mind, there is no halachic objection to having men who put on tefillin on Chol ha-Moed and men who do not, daven in the same shul(24).

13 Generally, the halachah is like Rava when he disagrees with Abbaye. The ruling of the Rambam concerning this issue, however, is unclear and subject to much debate by the later commentators.

16 Igros Moshe O.C. 2:23. This is also the opinion of most poskim with the exception of the Pe’as ha-Shulchan who rules that one should always daven according to the nusach of the tzibbur. Harav S.Z. Auerbach writes that it is not our practice to do so (Yom Tov Sheini K’hilchaso, pg. 180).

17Igros Moshe O.C. 2:23. [In other Responsa, however, Harav Feinstein required that Pesukei d’Zimrah and Birchos Kerias Shema be said according to the nusach of the tzibbur; see O.C. 2:104.] Harav S.Y. Elyashiv is quoted (Tefillah K’hilchasa, pg. 92) as permitting these tefillos to be recited according to one’s own nusach.

22Igros Moshe O.C. 2:94. It is reported, however, that the Brisker Rav left the shul when the congregation said Hallel (Hagadas Mo’adim u’Zemanim).

23 Igros Moshe Y.D. 3:96-8. If, however, he generally omits yire’u eineinu only on Motzaei Shabbos, then he must recite it along with the tzibbur; ibid.