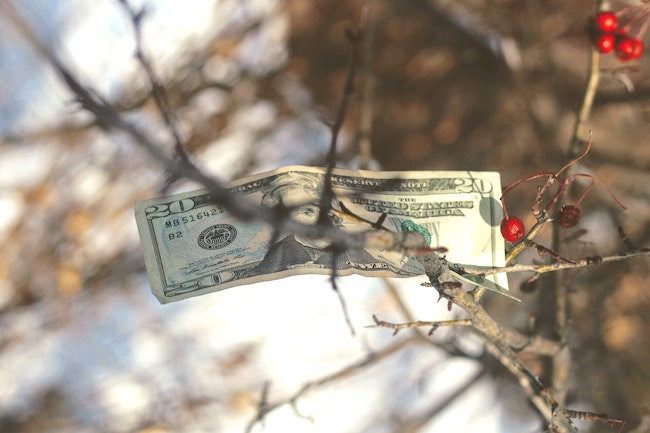 Taking Money Found on the Street

I understand that according to Halacha (Jewish Law), I can keep a ten-dollar bill that I find in the street. Is it a higher level to leave it where it is, since someone in a worse financial situation than I am might find it?

If a visibly needy person claims the money is his, even though I am almost positive that he is lying, should I still give the money to him?

You can keep the ten dollars, and you don’t have to give it to the person, providing you are sure that he’s lying.

Our Rabbis tell us that “odom hamashmish b’kisov b’kol sho’oh,” (a person checks his pockets very often). We assume that during one of these checks, once the person realizes he lost the item, he would have given up any hope of ever finding it. When it comes to money, it is very hard to find the owner since it could have belonged to anyone – especially in our case where it was found in the street. The money doesn’t have any siman (recognizable characteristics) that we can use to find the owner. We can assume that he has given up all hope of ever finding the money.

It is definitely by halachic standards not the original owner’s any longer, even though it was his originally. In such a case, though, there is a place for lifnim mishuras hadin, (acting beyond the letter of the law), of taking something where a person was meya’esh (given up hope) and returning it to him.

Should I give the money to charity rather than spending it on myself?

You don’t have to give it to tzedakah (charity).

I just want to mention that when I was a kid, if I would find money on the street, I was told to put it in my pocket and give it to tzedakah. It was a very good piece of chinuch (education). This suggestion reinforced in me the idea that tzedakah is essential, and that it’s a wonderful and an even exciting thing to do! When you find money, you get all excited since you are now able to give even more tzedakah than before! The excitement of finding the money translates into the excitement of the mitzvah of giving tzedakah.

This is a very wonderful tool for chinuch. On the other hand, imagine that you and your child find some money on the street. What do you do? You not only keep the money for yourself, but you go and gorge on potato chips or something else, since now you have a couple of extra dollars in your pocket. Now imagine that instead of that, you get your child all excited and give him the money to hold onto to give to tzedakah. You teach him to enjoy the mitzvah! It is definitely a different form of chinuch where you can teach your child not to always take for himself, but instead, give to others as well.

Al pi din (according to the letter of the law), you don’t need to give it to tzedakah. But in certain circumstances, especially with children growing up, and maybe with some adults as well, it might be worthwhile to reinforce the idea of giving tzedakah and performing mitzvos.

Then is it a higher level to give it to tzedakah?

According to the rules outlined above, you are allowed to keep what you find. It isn’t a higher level to give it to someone else. Giving the money to tzedakah is a praiseworthy thing to do, and even a mitzvah, but you aren’t required to do this. Maybe if you found a large amount of money, then give part of it to tzedakah. For example, if you find a large amount (let’s say, a thousand dollars), then maybe give ma’aser (tithe – approximately 10%).

By the way, if you find a very large amount, it is k’dai (appropriate) to put it aside and investigate. The person who lost it would be heartbroken and probably is searching for it. In such a case, you would perform a very, very great mitzvah to try to return it! You could save him from a lot of pain, suffering, and emotional distress by returning such a large sum of money.

Is one being a ba’al emunah (person of faith) if he says: “Look, on Rosh Hashonoh it was determined how much money I am going to have, so why not give it to tzedakah? Why should I keep it?”

Perhaps the money that you “found” is really Hakodosh Boruch Hu’s (G-d’s) money that He is giving to you as part of what was decided on Rosh Hashonoh. By just giving it away, you could be giving away your own money! Who says this is extra money?

Still, it’s to your advantage to use this experience to reinforce the inyan (concept) of tzedakah, especially where it involves a small amount of money. It is an important lesson to learn with a small price to pay! We have to try to reinforce generosity and fight selfishness because selfishness is something that will grow stronger and stronger if we leave it alone. It’s not enough to give tzedakah once in a while, but we have to do it over and over again. Therefore, at a higher level, you have a great opportunity to reinforce generosity, but again, this is not required.

NEXT WEEK’S QUESTION 79: WHEN OTHER STUDENTS USE A STOLEN TEST

I’m a university student, and I’ve been in several classes where the test marks are curved. The teacher gives the student with the highest score the number of extra points he needs in order to have a total score of 100. Afterwards, the same number of points are added to every other person’s score. For example, if the highest score is 90, each person gets 10 points added to his score. In one class, the vast majority (about 80%) of the students had advance copies of the test. I was offered the answers, but of course, I refused. Now, I am at a disadvantage compared to the other students. Do I have any recourse? Should I do more to protest to my fellow students? Is it advisable to tell the professor? What can I do?

NOTE: We want to thank Reuven Singer for helping with the editing of this class.