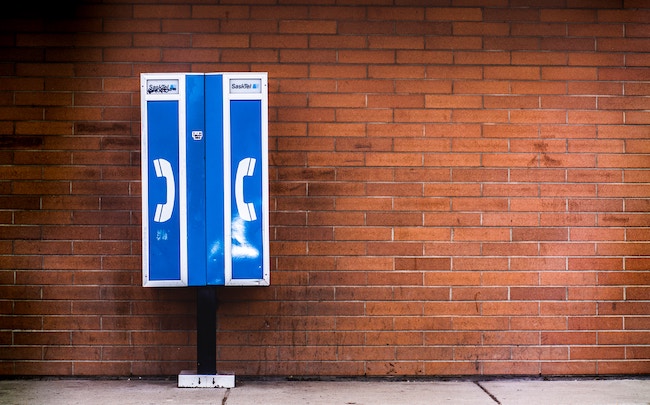 Running to a Phone

It’s permissible to take the phone before him, because you happened to be there before him. To run in order to be there before him is not the correct thing to do. But just because he started out earlier doesn’t mean he has priority. On the other hand, there is an issue of chesed (kindness) involved here, and there’s something that could be said for choosing to do that.

How about a “mar’as eiyin” (appearing wrong)? Could it appear as though I am being too ‘pushy’?

That’s true — a person should be careful that it doesn’t appear that he is doing something bad — he should also be careful that the other person doesn’t have bad feelings because of him. . That’s an important part of chesed (kindness)..

I remember my wife’s grandfather z”l, he was a shochet (butcher), a litvishe yid (Lithuanian Jew). He was a very erliche yid (sincere and honest Jew). He lived in Kentucky, and later in Cincinnati. In his old age he came to New York, and then he saw Chassidim for the first time — he hadn’t really come across too many in Kentucky and Cincinnati. Once he went to a heart doctor in New York. While he was waiting, the door opened and a distinguished rebbe (Chasidic Rabbi) with his gabbai (assistant) walked in. The gabbai brushed everybody aside and walked straight to the door and ushered the rebbe in to see the doctor. Before going in, the rebbe saw him waiting there. He walked over to him and said, “I want to ask you a favor. I’m going to be with the doctor just one minute, if it’s okay with you. If it’s not okay with you, I won’t go in. One minute is all I need.” My wife’s grandfather said okay, and the rebbe went inside. He was in there for a minute or so, and then he came back out. The gabbai was ready to march straight out the door, but the rebbe walked over to him again, and said, “Was it okay with you? I tried hard to make it short. I think it was just a minute or two that I was there. Thank you so much. I really appreciate it.” Later my wife’s grandfather said to me, “I don’t know much about Chassidim and rebbes, but there’s one rebbe that I could tell you is okay.”

So where does this fall in the realm of halacha (Jewish Law)? Is this just a nice middah (character trait)?

Yes, but a Mida Tova (good attribute), although not required by strict Halachah, can sometimes be more central to Torah values, and most often more difficult and necessary to cultivate. The Talmud states: “What is Kiddish Hashem? If one studies Torah, deals honestly, and behaves peacefully with his fellows. What do people say of him? Happy is the man who learns Torah. Of him it is written: ‘He (Hashem) said, you are my servant, a Jew of whom I (Hashem) can be proud.’ ”

So if there is a possibility that the person would perceive it as though you’re taking something away from him, is it a chilul Hashem (desecration of G-d’s name)?

It may not be chillul Hashem. The person will not think to himself, “Oh, he’s an Orthodox Jew…” He’ll just be upset at you. But again, it’s worth emphasizing that a person should be mesame’ach Elokim v’anoshim (a person should make G-d and other people happy).

At a question and answer gathering, a person once asked me, “When one hears rumors of a possible koshrus problem with a product known to be kosher should he immediately publicize the problem, and discourage people from using it?” I said no. First find out for sure about the problem. If there is really a legitimate basis for concern, the problem should be made public. But the reaction should not be immediate.

There are many reasons for this. First, when something has been presumed to be kosher – it has a chezkas kashrus (presumption of being kosher), and a rumor doesn’t change that unless substantiated. But there is a more important reason. The Kohen Gadol (High Priest), when he went into the Holy of Holies on Yom Kippur, said a very important prayer – asking for forgiveness for all the people. However, he didn’t stay there too long. The reason, the Mishnah says, is so that he shouldn’t scare the tzibbor (the public). When people put the declarations of possible problems — the kol korehs (public proclamations) — on the street right away, they’re making the people upset and fearful. This is very unsettling, and should be avoided.

On the other hand, when people are incorrectly upset about something, one must be consider their feelings. If one person walks very slowly, and the other more quickly, the one who walks more quickly has no obligation to let the other one go first. The faster walker should, however, try to be polite about it, and say, “Is it okay with you that I make the call? If it’s not, you make the call.” The person will decline and say, “No, no, go ahead with the call”. Be polite and kind to each other, then everybody will be happy. That’s the way to do things.

Is there a greater or lesser issue of chillul Hashem, depending on if the person is a Jew or not a Jew, or if he is not familiar with observant people?

It does make a difference if the person is not a Jew. You should be more concerned if the other person is not a Jew. I was in a situation once many years ago, and up to this day I am a little bit sad about it. I drove to an affair, and there was a parking spot right there in front of where I wanted to go. So I went ahead in order to parallel park into that space, and then I started backing in. Just then someone — not a Jew — zoomed in with his car and went halfway in, so that I couldn’t move. I wasn’t sure if I should leave, or what to do. Should I get out of the car and tell him that it’s my space? He knew he was cutting me off. But I was hesitant about what am I going to do? Who knows what kind of abusive language he’ll hurl at me?

I just sat in my seat for a minute or so, and didn’t move. Then I decided to get out, and he said to me, “You look down on our people. You didn’t have the courtesy…” Talk about courtesy, when he saw that I was backing into that space. He was obviously not interested in courtesy. But I thought that there was a trace of chillul Hashem because he said, “you look down upon our people.” What was I to do? Tell him that he was acting rudely?

No, I have no qualms about the difficulty I caused the other person, because it was really his intention to cut me off. But the chillul Hashem bothered me, because he’s going to tell people that these rabbis, these Jews, look down on others. It would cause hostile feelings towards us.

So a person should be more stringent with non-observant Jews and non-Jewish people?

At work, a software company wants me to evaluate their product so that I may recommend that our company purchase it. They have arranged that their technical support person will be available to answer any questions I may have. On a separate project I have, that has nothing to do with the evaluation of the company’s product, I have a question that I feel their technical support person might be able to answer. Can I call him up and ask him this question? If I call up for a question that does have to do with his product, can I ask him the other question if it doesn’t take too much of his time?

NEXT WEEK’S QUESTION 12: LENDING A PEN FROM WORK

If my son asks me for a pen so he can use it at school, and the only pen I have is a 10-cent pen I have from work, can I give it to him, being reasonably certain that it won’t find its way back to my desk at work?