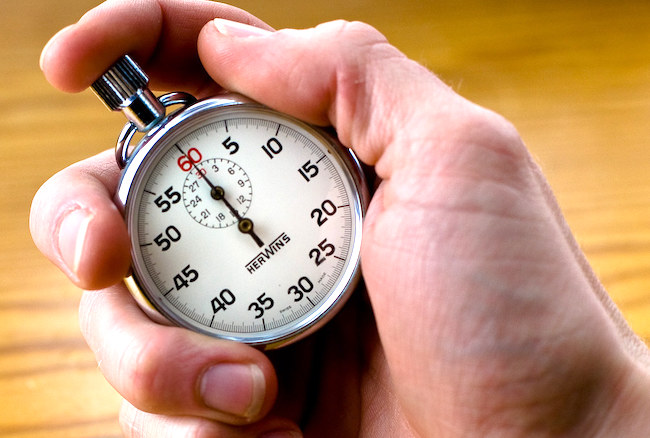 He [Yehuda ben Taima] used to say: At five [one should begin the study of] Scriptures; at ten, Mishna; at thirteen [one becomes obligated in] the commandments; at fifteen [the study of] Talmud; at eighteen the wedding canopy; at twenty to pursue; at thirty strength; at forty understanding; at fifty counsel; at sixty old age; at seventy fullness of years; at eighty spiritual strength; at ninety bending over; at one hundred it is as if he has died and passed on from the world.

In this mishna, Yehuda ben Taima sums up the human experience with simple but uncanny accuracy. It is interesting that although Yehuda earlier challenged us to such great heights — to serve G-d with the fierceness of a leopard, swiftness of a deer, etc. (Mishna 23) — here he sees life in such undulating order and regularity. We reach for the stars, yet we must be thankful if we merit lives of normality and longevity.

Before we begin examining the stages of life, I can’t resist quoting a parallel statement in the Midrash (Koheles Rabbah 1:2) — more amusing, in a pathetic sort of way. In the beginning of Koheles (Ecclesiastes), King Solomon seven times calls the physical world a place of “hevel” — vanity or futility. The Midrash relates this to the seven stages of life. At one year of age, man is a king, fondled and doted upon by all. At two and three he is a pig, groping in the garbage. At ten he prances around like a kid. At twenty he is a horse, preening himself in search of a wife. After marriage he works like a donkey to earn a living. When he has children he is brazen as a dog trying to raise and support his family. And at the end of his life he becomes senile and senseless as an ape. A script few of us veer from. For better or worse — as Yehuda wrote above — life really is a mimicry of the animal kingdom!

Returning to our mishna, many of the earlier stages deal with the subjects a student must study, while the later ones deal with the spiritual and intellectual milestones he reaches. The focus at first is thus more on what one should be doing than what one has become. This is because the earlier stages of a person’s life are still formative. A person typically has not yet developed his talents and personality. Often in youth, we are too preoccupied trying to become what we think would find others’ approval and enhance our popularity than figuring out whom we actually are.

As we age, however, we begin to come to terms with ourselves — and to realize the futility of trying to turn ourselves into something we are not. At that point we are ready to recognize — and realize — true spiritual accomplishment — something we can only truly do after we have mastered that first most critical step: knowing ourselves.

Our mishna begins with the study of Scripture at five, Mishna at ten, and Talmud at fifteen. The commentator Rashi explains that at ten, a student should study the Mishna according to its plain meaning alone — to become familiar with the basic subject matter. The study of Talmud implies the deeper study and analysis of the Mishna — contrasting different cases, examining basic principles, understanding the source and rationale for each opinion, and deciding practical Jewish law. (Recall that this mishna was written before the Talmud of today existed. “Talmud study” meant the advanced and in-depth study of the Mishna — performed orally for generations and only later recorded in the Talmud.)

One important message of our mishna is the importance of mastering Scripture and the Mishna before beginning advanced Talmud study. And this is something not entirely adhered to in today’s educational systems. Today, a schoolboy typically begins Talmud study at ten or not long after — well before having completed the Mishna — and pretty soon that becomes practically the only subject he studies. Why do we seem to ignore something so explicitly stated by our Sages?

The reason for this innovation is that the reality is very different today. Children today are literally bombarded with all sorts of alternatives to traditional Torah study — whether intellectually or physically more stimulating. With so much out there beckoning, if the full rigor of our mishna’s formula would be borne down upon our children, they might well seek greener pastures. Once upon a time Jewish communities were relatively secluded and self-contained. And further, the society at large was hardly very welcoming. A lad minded his studies and stayed in the fold for he literally had nowhere else to go.

Today, however, the world beckons, and no matter how hard we try, it’s not likely there’s any real turning back inwards. We need to keep our children both occupied and intellectually stimulated — or run the risk of losing them entirely. We don’t push too hard or they’re liable to push back. And at the risk of belaboring the metaphor, it’s a tug-of-war we’re not likely to win. Because of this, we have them move on to the more stimulating and intellectually challenging Talmud study basically as early as possible. Keep them enticed, for if the Torah doesn’t do it something else will.

(It’s interesting to note that as Orthodoxy has become healthier, more vibrant, and better entrenched, the traditional system has been slowly returning. In Israel in particular, school systems are cropping up which apply our mishna’s technique to the fullest — with fairly good results.)

There is a second, related phenomenon today. Older students — and certainly those who begin their Jewish education as adults — often feel a much greater need to find meaning and stimulation in their studies: that’s what brought them there in the first place. Such people are seeking answers; they want to make sense out of life — something found but perhaps not as readily in “If an ox gores a cow…” (Mishna Bava Kama 5:1). Such people have a very valid and worthy need, and one which fully deserves to be satisfied.

Unfortunately, however, such people do not always have the patience to roll up their sleeves and spend tiresome years on the basics. The Sages tells us that the great scholar R. Akiva, unlearned until the age 40, left home (on the encouragement of his wife) and sat himself together with his young son to learn the aleph-bet from the schoolteacher — then to advance to Scriptures, Mishna, and Talmud, finally growing into the leading scholar of the generation (Avos d’Rav Nosson 6:2). And that’s the only way to truly do it. Most of us, however, do not share that same patience and perseverance. We want meaning and answers — and people today are just not satisfied being told to study for years at which point they’ll realize they never had questions to begin with.

Our desire for “answers” even drives us to dabble in (and not at all understand) the secrets of Kabbalah — to really understand G-d. Hence the absurdity today of “Kabbalah for beginners” classes — an oxymoron if there ever was one. (Note that Kabbalah is not even on our mishna’s list.)

This all stems from a very understandable and to a great extent justified need of people today. And we must provide seeking beginners with solid answers — before they run off to pursue greener pastures — the quick-fix “Be good; it’s easy” answers proffered by other religions. Yet we must not forget that the situation today is exceptional. True wisdom and understanding — the later stages of our mishna — can only truly and healthily be achieved through the Scriptures, Mishna and Talmud of the beginning of our mishna. Otherwise, the meaning and depth of understanding of the later stages will be built upon very little — and can easily dissipate into hazy and inchoate abstractions.

Moving on, our mishna tells us that twenty is for “pursuit”. Although there are different explanations in the commentators, the more common understanding is pursuit of livelihood (Bartinura and others). (I suppose that after marriage at eighteen, the wedding money has by then been spent — and perhaps the family is beginning to grow.)

Thirty is for strength. It the age at which a man’s strength is at its peak — both physically and emotionally. At that age, we see our lives ahead of us, and we feel up to its challenges. We can still solve the world’s problems — not to mention our own.

By forty and the later years, our vigor — as well as our outlook — is older and wiser. We’ve experienced the difficulties of life (beginning of course with teenage children) and recognize the intractability of human nature and of life’s problems. As the decades progress — in ever faster procession — our physical will and desires fade, and — to end on a poignant note — we truly understand life only when we no longer have the strength to live it nor the years to take advantage of it. (And the next generation is not about to listen to our sage advice either. They’re still exhausting all the alternatives.) Judaism thus constantly implores us to learn from our sages and elders, in the hope that the strength and vibrancy of youth be tempered with the wisdom and maturity of experience.