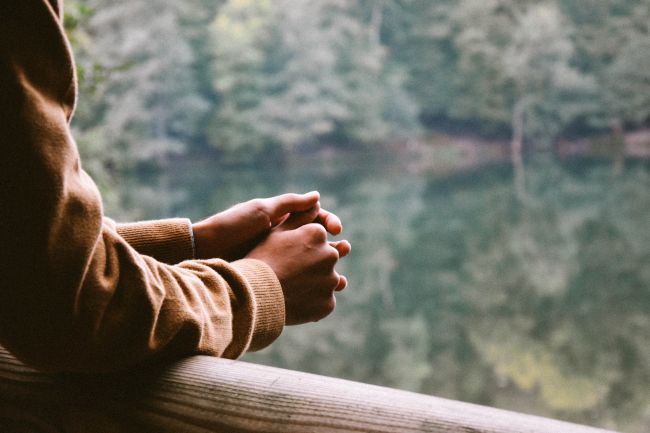 “Before Shemoneh Esrei, Rava would put his hands on his chest, one resting on the other, like a slave in front of his master” (Shabbos 10a). The halacha upholds this practice and recommends holding one’s hands in this position during Shemoneh Esrei (Shulchan Aruch 95,3). Halachic authorities note that this practice depends on the accepted custom for how one stands before a king, and if the custom changes the halacha will also change (Mishna Berura 95,6).

Based on this explanation, the Zohar warns against intertwining the fingers of one’s right and left hands at any time. Such a formation mixes an element of strict justice with Divine mercy, and is likely to bringing judgment upon oneself (Zohar 24a). Especially during prayer, when we are trying to arouse Hashem’s mercy, one should avoid interlocking one’s fingers (Be’er Heitiv 95,3).

Positioning one’s hands and other forms of body language are all meant to enhance one’s prayers. If such gestures are interfering with concentration, a person is better off taking a different position, such as putting his hands on the table in front of him or letting them hang by his sides. Everyone should recite Shemoneh Esrei in a way that is comfortable for conversing with Hashem, avoiding positions that feel awkward or disrespectful (Shulchan Aruch 95,3; Aruch Hashulchan 91,7).

« Connected Feet
A Meeting of Eyes »