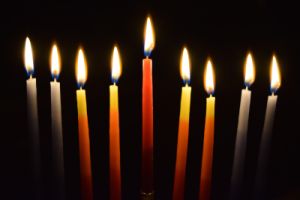 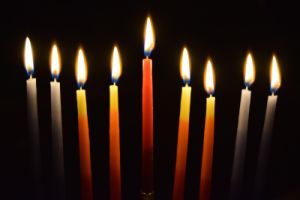 At Chanuka, the mitzva of lighting neiros — oil lamps or candles — is in order to publicize the miracles which occurred in the ancient story. The mitzvos of Chanuka are of Rabbinic origin (Shabbos, 23a); still, the Chasom Sofer writes that the concept of “publicizing the miracles” is essentially a Torah obligation. The Rabbis simply told us how we are required to publicize.

The main obligation is merely one neir per household, but the custom is to add an additional neir each successive night. (Shabbos, 21b; Shulchan Aruch 671:2)

The Shulchan Aruch writes that one would light the eight neiros in a row, perpendicular to the door. The first neir would be within a hand-breadth of the door. Nonetheless, on the second night, one starts the lighting with a neir adjacent to the first one, away from the door. On each succeeding night, one adds a new neir still further from the door. We always begin by lighting the newest one furthest from the door. Even though the first neir chosen for the lighting is not the main mitzva (i.e. the one near the door) — nonetheless, we want to demonstrate the newness of the miracle — the additional aspect that each night the miracle increased in magnitude. (Shulchan Aruch, 676:5)

For the same reason, we sing the Hallel every day for the eight days of Chanuka. We rejoice anew each day; each day the miracle intensified! (See Archin 10b)

Similarly, we make the brocha sh’asa nisim — every day during Chanuka — because there was a miracle every day. (Shabbos 23a)

This regards lighting outside the door. (Shabbos, 21b; Shulchan Aruch, 671:7) Today most people light inside the house. (Rama, 671:11, 671:14, 672:3) The Vilna Gaon writes that inside — every place is considered “its place.” That is, the preference of placement only concerned lighting outside, near the door — the neir closest to the door was the main mitzva. Now that people are lighting inside, whichever neir is kindled first — has fulfilled the mitzva.

The Brocha for Kindling

If the neiros were kindled during the required time, even if they inadvertently went out after a brief time, the mitzva was nonetheless fulfilled. (Shabbos, 21b; Shulchan Aruch, 673:5)

In other words, the additional neiros are merely an extension of the mitzva to kindle the first neir. If the first neir has completed its role, one cannot say the brocha on the extension alone.

The Malbim writes that the story of Yoseif and his brothers can only be understood in context: All elements of the story were manipulated by Hashem! So Yoseif said to them: “I am Yoseif, whom you sold… don’t be upset that you sold me, for Hashem sent me before you to preserve life.” (Bereishis, 45:4-5)

Our faith must be akin to our ancestors of ancient times — throughout the Golus, they saw the hand of Hashem. There are miracles all about us, and delivery is at hand. Believe this — and you, too, can publicize the miracles to the world!