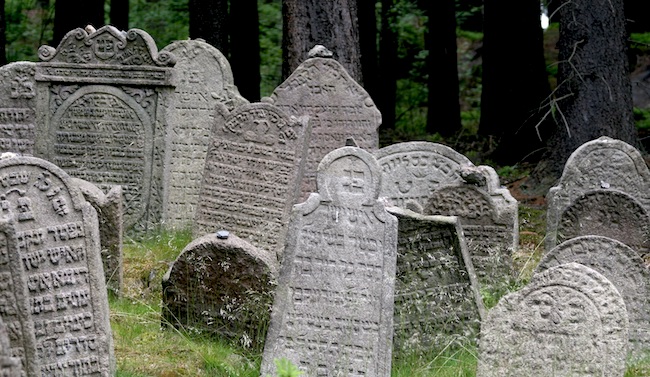 One who sins to his fellow, and his fellow dies before he begs his forgiveness, [the sinner must] bring ten people, stand them up by [his fellow’s] grave, and say before them, ‘I have sinned to G-d, the L-rd of Israel and to so and so in that I did to him such and such…’ If he owed [the deceased] money, he must return it to his heirs. If he does not know an heir [of the victim], he must leave [the money] with the courts and confess.

In the past few laws, the Rambam has been discussing the sinner’s obligation to beg the forgiveness of the one he has wronged. In this law he discusses the means of making amends to a person who passed away before the sinner was able to apologize. I don’t have a lot to add to this week’s law, but a few minor points are worth noting.

First of all, it goes without saying that after a person’s death his soul still exists. The person you wronged is still alive — on every plane but the physical — and may well still be hurting over the wrong you committed against him. You have the same obligation to apologize to him as when he was among the living. It is just now somewhat more difficult to reach him. (For a fascinating Talmudic passage about the awareness of the dead of the goings on of this world, see Brachos 18b.)

As an aside, I am always appalled at the number of Jews I encounter who have no idea that Judaism believes in the Afterlife, thinking it a Christian invention. There isn’t the slightest basis for this: Christianity inherited the entire concept from us — a great many of the details as well. It is true, as I’ve pointed out in the past, that the Written Torah places little emphasis on such matters. The Torah is primarily a guide book for living meaningfully in this world. It is not a philosophical work on contemplating G-d. Yet so many references to the hereafter exist in Scriptural and Rabbinical writings that there can be no doubt whatsoever as to its existence. The Rambam himself codifies the belief in the World to Come as a part of the eleventh of his Thirteen Fundamental Principles of Faith.

Regarding why less emphasis is placed on the World to Come in Rabbinical writings than in other religions, I’m always fond of quoting a remark I heard attributed to R. Samson Raphael Hirsch, which really hits the proverbial nail on the head: “Whereas Christianity is a religion invented by man to understand G-d, Judaism is a religion invented by G-d to understand man.”

If the origin of a religion is man’s very worthy desire to figure out who G-d is and to make sense of the universe, then much of its focus will be on the Divine: who is G-d, where is He, what is He, how is He, etc. Much ink will be spilled — and wars fought — over precise matters of doctrine, many of which appearing wholly inconsequential to the uninitiated.

Judaism, however, was a religion invented by G-d. G-d was not interested in writing a work describing Himself. His intent was instructing man in the meaningful life. Although to be sure the Torah teaches us basic tenets of reward and punishment and of Heaven and Hell, the focus is almost exclusively on man — who we are, how we should behave, and how we must care for the enormous gifts of life and the world G-d has bequeathed to us. A literature does exist on more subtle matters of faith, but it was never the primary emphasis of the Torah nor of Israel’s study of it.

A second very significant thought is proposed by R. Yehuda HaLevi (12th Century Spanish philosopher and poet) in his work The Kuzari (I:104-111). Other religions generally focus so much on the World to Come because that really is all they can promise. Since they cannot guarantee reward in this world — without running the risk of engendering some very powerful theological difficulties for themselves — they spend their efforts pumping up the next world. They promise the moon — just around the corner! And why not? No one will ever come back to disprove them!

Our Torah can and does do much better. It promises that if we serve Him, He will dwell among us (see Exodus 25:8). We will see open miracles in the Temple. Prophets will speak in the name of G-d. We will dwell in a land whose productivity depends entirely on our spiritual level. We can give more charity and see the results. G-d promises the World to Come — at least a likeness of it — right here and now. Sure, much more is in store in the Next World. The Torah makes it clear that this world is merely a foretaste of things to come. Yet, G-d need not wait for some hazy future world to reward His faithful. He promises the moon and delivers.

Returning to the Rambam, I feel another significant point of clarification is in line. We must apologize to the deceased whom we wronged during his lifetime. When we think about it, it’s actually surprising that this is still necessary. If this person is now up in Heaven, he must now know the truth about this world and all that occurs in it. Therefore, it’s hard to believe he would still really care that I hurt or insulted him once upon a time. Not only would petty words or deeds hardly matter to a person in the World of Souls, but perhaps he now knows that the little bit of harm I did him was actually quite in his interests. Instead of suffering purgatory in Hell, he paid off a few more of his debts down here, when the suffering was so much more trivial and transient. He may even be grateful that a jerk like me volunteered to be G-d’s staff of chastisement — before it was too late.

This, however, is not necessarily true. For better or worse, when we go to Heaven we will not be all that different from whom we are today (and our share of the Hereafter will reflect that). As evident as the “truth” will then be, we will still possess much of the same smallness and pettiness which we made a part of ourselves during out lifetimes. In Heaven we do not instantly become saints, floating from cloud to cloud with our heavenly harp and wings. We will be left with all of our faults and foibles. And even worse, there will no longer be anything we’ll be able to do about them. The Sages teach us: “One hour of repentance and good deeds in this world is better than the entire life of the World to Come” (Pirkei Avos 4:22 http:// www.torah.org/learning/pirkei-avos/ch4-22b.html). Only in this world can we strive to make ourselves better. In the next, we will be who we will be — forever.

There is a very curious story in Scripture (I Kings 22). Achav (Ahab), wicked king of Israel, wanted to capture a portion of land from the neighboring nation of Aram. He asked Jehoshaphat, the righteous King of Judah, to accompany him. Jehoshaphat agreed, but asked that Achav first confer with the prophets for their prognosis. Achav readily agreed, quickly producing hundreds of his false prophets. They naturally and accommodatingly promised him complete victory.

But there was something different this time. This wasn’t the prophets’ typical sham. This time they seemed possessed. They were swaying and chanting as if bewitched, as if some true spirit was pulsating within them.

Even so, King Jehoshaphat was not convinced. He asked if a *real* prophet could be found. Michayhu son of Yimla was produced. After some reluctance, he informed them of the true events which had transpired in Heaven. G-d was sitting on His throne, with the entire host of heaven to His right and left. (See Talmud Sanherdrin 102b for an understanding of this highly anthropomorphic verse.) G-d asked: “Who will seduce Achav and he will ascend and fall in Ramos Gilad?… A spirit went forth and it stood before G-d and said, ‘I will seduce him… I will go out and be a false spirit before all his prophets.’ And [the L-rd] said, ‘Seduce and you will be successful. Go out and do so.'”

This, explained Michayhu, was the ‘spirit’ which had possessed Achav’s otherwise worthless and ineffectual prophets. They themselves had been duped into imagining they were granted some true spirit of prophecy this one time.

Well of course, at this point we might expect Achav to come to his senses and take heed of the prophet’s stern warning. But naturally that wasn’t the Divine plan — nor the objectivity to be expected of wicked, headstrong Achav. Achav insisted on Michayhu’s incarceration and marches off — to his death. The “spirit” had done its job well.

One final question. Who was this “spirit” floating around in heaven, who came forth to fool Achav and his prophets? As little as we know about the goings on in heaven, are there actually free spirits roaming about up there volunteering to do G-d’s dirty work for Him, some heavenly body of ghostly mercenaries?

Explains the Talmud (Sanhedrin 89a) that this was the recently-deceased Navas HaYizraeli. Who was Navas? An ordinary Israeli citizen who had the poor fortune of owning a vineyard Achav coveted. When he refused to part with his field, Achav’s darling wife Izevel (Jezebel), probably even more vile than Achav, had him framed and put to death, and Achav claimed the vineyard for himself (I Kings 21). Navas, now in heaven, wanted his revenge — and found the perfect way to exact it.

States the Talmud that on account of Navas’s revenge, he lost his own place in heaven. When G-d said to him “Go out (and seduce)” (22:22), part of the implied meaning was go out of My close quarters. Up until now you were a victim of Achav’s capriciousness. Now you have exacted your own sweet revenge. There is no longer place for you in the highest heavens.

There are many powerful lessons which may be culled from this one cryptic event. For our purposes, however, I would like to just bring out one very simple point — that after a person’s death he remains the same person he was in his lifetime. Navas was still smarting from the royal couple’s wickedness, and he yearned for retribution — even at the cost of his own World to Come. So too — returning to our law — if you’ve wronged a person and he passes on, he may still have it in for you in heaven. Not the sort of being you would want scheming against you.

I will just conclude this already-lengthy class by again quoting the mishna in Pirkei Avos: “One hour of repentance and good deeds in this world is better than the entire life of the World to Come.” We have the chance, while yet alive, to improve ourselves and better our ways. The fleeting tens of years we have today will not last forever. And the eternity which will follow will only be as good as we make it today. Let us utilize every moment while we still have the opportunity, before “the dust returns to the ground as it was, and the spirit returns to the G-d who granted it” (Koheles 12:7).