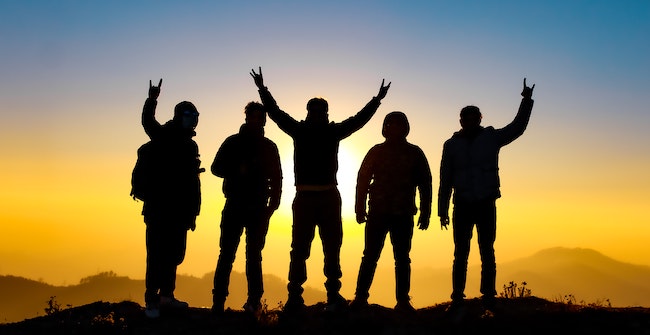 This week’s mishna was authored by Hillel, to whom we were introduced in Chapter 1, Mishnas 12-14. Hillel was one of the great scholars of the early generations of the Mishna and of the late Second Temple era, of approximately the 1st century B.C.E. This mishna presents us with a collection of his short sayings, all of them invaluable and deserving our careful attention. We will study each one separately.

Hillel first tells us not to separate ourselves from the community. One should not feel he is an island, that he neither needs the rest of his community nor need share in their suffering. The Talmud states: “When the community is suffering, one may not say ‘I will go to my house, eat and drink, and I will be fine'” (Ta’anis 11a).

A common mindset one hears nowadays, whether spoken or not and on both the personal and national levels, is “It’s not my problem.” If people are suffering on the other side of the world (or two blocks away) it doesn’t affect me, so why should I care? Needless to say, such is a very UN-Jewish attitude. As we will learn later, one of the traits of the Torah scholar is “bearing the yoke with his fellow” (6:6, Way 37). We should care if others are suffering — whether in the form of massacres in Homs or a neighbor whose teenage child isn’t coping. Our care may translate into direct involvement, financial assistance, or at the very least (or maybe not so least) prayer for those in need. The Talmud writes, “One who is able to pray for mercy for another but does not is called a sinner” (Brachos 12b). There is certainly some way that all of us, no matter how distant and removed, can help.

Regardless, however, of what we do about it — and of course we can’t solve all the world’s problems and priorities must be established — we must certainly care about others. And it does not stem from some altruistic sense of universal sympathy for mankind — nor some selfish sense that it may happen to us one day and we’ll need their help. It is because we all share the world together and we are all children of G-d. And if another child is suffering, he is my brother.

There is a further aspect to the importance of community — one which applies in particular to the Jewish people. When G-d entrusted Israel with the Torah and its national mission, it was not as a collection of great individuals. It was as a nation.

On the one hand, the Book of Genesis is the story of great individuals, of men such as Abraham who discovered G-d and followed His call. Exodus, by contrast, is not a book about individuals, but about a nation. It does not focus on great personalities — save a few brief incidents which outlined Moses’s development as a leader. As scholars have noted, we read the first few chapters of Exodus and we are struck that practically no names appear: “And a man went from the House of Levi and he married the daughter of Levi” (2:1). “And his sister stood at a distance to know what would be done to him” (v. 4). The greatest Jews of the generation (Amram, Yocheved, Miriam) are no-names, fading into obscurity.

The reason for this is because the Book of Exodus — the story of G-d redeeming us and making us His chosen nation — was not concerned with individuals. G-d selected us as a nation, not as a collection of people, however great. When Israel stood at Sinai to receive the Torah, the verse states that “Israel camped there opposite the mountain” (Exodus 19:2). The Midrash, noting that Israel is there referred to in the singular (as one singular nation), comments: “as one man with one heart.” We were united and G-d selected us. Only together can we truly serve G-d.

As I once heard R. Yitzchak Breitowitz point it, this is true firstly in a very literal sense. The Torah contains 613 mitzvos (commandments), yet no one Jew can perform all of them. Some mitzvos apply only to priests (such as the Temple service), while some apply only to non-priests (burial of the dead); some apply only to men, and some only to women (laws of family purity). When G-d commanded us in all 613, His intention was that we perform them as a nation.

In addition, some of us are clearly more suited for some areas of Judaism than others. Some are scribes, some (not me) can slaughter animals or perform circumcisions, some are educators, some are supporters of Torah, some are thinkers or visionaries, some down-to-earth doers, etc. The mitzvos were given to a nation, in which if each and every one of us, using his or her own unique and G-d-given talents, performs his or her part, Israel in its entirety becomes “a kingdom of priests and a holy nation” (Exodus 19:6).

Finally, this message is equally relevant on a community-wide level. We must serve and stand before G-d as a united community. The Sages seem to almost want sinners to be included in our synagogues and congregations. The Talmud writes that any fast day which does not include the sinners of Israel (who are of course also fasting and attempting to be a part of the gathering) is not a fast day, for chelbina (galbanum), a bitter smelling spice, was an ingredient of the daily incense offering in the Temple (Kerisos 6b). For better or worse, it takes all kinds to make a nation.

Likewise, the synagogue services on Yom Kippur begin with a proclamation permitting prayer with transgressors. We don’t want to rule out anyone (who wants to pray), regardless of how he acted the rest of the year. Were we really such paragons of virtue ourselves? We must approach G-d as a community, as an all-inclusive assembly of G-d. Once we start rejecting people, even the ones most wicked or distasteful to us, we go from being an all-inclusive nation of G-d to an assortment of individuals — the ones we happen to get along with. And as individuals we will never withstand G-d’s exacting and scrutinizing judgment. United we have a chance of surviving; divided, forget it.

(On the other hand, there are people who openly and knowingly reject the most fundamental principles of Judaism — belief in G-d or in the divinity of the Torah etc. — and not from a lack of knowledge or education, but from an utter contempt of G-d’s word. Such people have willingly removed themselves from the fold, and there is no obligation to include them. We try to be all-inclusive, but we are still a community of G-d.)

There is an important exception to the above, to being a part of the community. And that is if the society in which we live becomes degenerate. Maimonides (Mishne Torah, Hilchos De’os 6:1) writes as follows:

“The nature of man is to be influenced both in outlook and deed by his friends and to act in the manner of the people of his country. Therefore, one should strive to befriend the righteous… so that he will learn their ways. He should likewise avoid the wicked… If he lives in a country where the customs are evil and its inhabitants do not follow the upright path, he should move to a place where the people are righteous and act properly. And if all the countries he knows about act improperly as in our times (emphasis mine), or if he cannot move to a different country… he should dwell alone [dissociated from others]… And if [this too is impractical]… he should move out to the caves and wilderness, and not accustom himself to the ways of sin.”

We should care about others and want to be involved with them and enlighten them. Yet we may never allow this to cause us to sacrifice our own G-d-given standards of ethics and morality. If the society in which we live drops all adherence to moral standards, (Are things really better today than they were in Maimonides’ time?) we are left with no choice. No one can take on a whole country, no matter how strong his convictions and compelling his arguments. And when matters get that bad, we must simply bow out: withdraw within ourselves, preserve what we may, and pray that G-d bring better times.