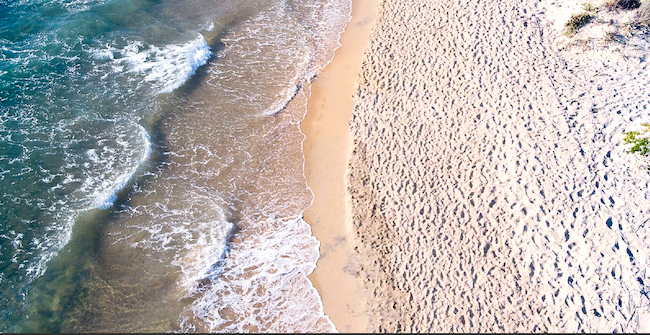 In the previous class we discussed how the Jewish perspective on sexuality has both spiritual and physical underpinnings. We also mentioned the significance of mikvah and family purity in maintaining the integrity of the Jewish family through the ages.

The following brief description of family purity does not sufficiently convey details of its proper practice or the depth of its spiritual beauty. I have heard from Jewish couples who have integrated it into their lives, that exposure to family purity has erased any prior doubts that the Torah was given by G-d, since the genius of its practices seems beyond the scope of human intelligence. Nevertheless, to the modern mind, family purity may at first seem strange.

In Jewish family purity, a couple separates physically at the onset of the wife’s period and contact resume seven days following its conclusion. On the eve of the night the couple is to resume relations, the wife immerses in the waters of the mikvah, where she says a prayer inviting G-d to sanctify her forthcoming intimacy with her husband.

Essentially, the sexual union is an affirmation of life, as the couple draws together in the sacred endeavor to bring down a new soul from its heavenly source into this world. Conversely, the time when a couple abstains from contact marks the phase when a woman undergoes a loss of life potential, as the unfertilized ovum leaves her body. When a couple waits for this time to elapse and the wife employs the mikvah before rejoining her husband in physical intimacy, their union represents a reaffirmation of the powers of life over death – a rising above mortality. The cessation of physical relations has no association with revulsion over a woman’s monthly flow, as is often mistakenly assumed. Such a concept has no origin in Jewish sources.

Jewish law calls for the use of mikvah even among couples for whom procreation is not possible. Indeed, Jewish law also calls for the active pursuit of a healthy, wholesome sexual relationship for married couples of all ages, independent of whether creation of a human life is possible. This indicates that mikvah plays a role in Jewish relationships beyond even its profound association with life and death.

In order to clearly appreciate mikvah, we must return to the Torah. In Leviticus, chapter 16, we read about the connection of mikvah to the High Priest in Jerusalem, during the era when the Temple still stood. At the apex of the Yom Kippur service, the High Priest would enter the Temple’s innermost chamber – the holiest space on earth – where he would ask forgiveness for the Jewish Nation’s shortcomings throughout the previous year. No person was permitted to enter this chamber except for the High Priest, on this one day, once a year.

It is hard to imagine the significance of this yearly moment. For seven days beforehand, the High Priest prepared. The entire night before Yom Kippur, he was tested by a group of great Jewish leaders, who pushed him to the heights of his moral and spiritual potential. The future of the Jewish Nation and the entire world would rest on his encounter alone with G-d the next day.

After his night-long vigil, the High Priest had but one last preparation before the awesome moment in which he would enter the holy of holies and effect atonement for himself, his nation and the world…he immersed in the mikvah.

Resumption of the intimacy between husband and wife is similarly awesome. After seven days of preparing for this moment, a woman immerses in order to elevate her relationship with her husband and to elevate the world itself. How can immersing in something as simple as water have such a profound effect? Water is said to be the most spiritual of all elements. The opening passages of Genesis (1-22) describe the creation of the earth and mankind. In Genesis 1:2, water is mentioned, (“The breath of G-d hovered over the face of the waters” (Genesis 1:2) yet its initial creation is not described. From this, our sages derive that water pre-existed the account of creation and, in fact, pre-existed the world itself. The water in a mikvah is the closest we have to a piece of this Divine essence on earth. Its waters are untouched by human hands, having been collected from rainfall or from an underground source.

When a woman visits the mikvah, just prior to immersing herself in these G-dly waters, she utters a prayer asking the Almighty to join her in the sacred act of conjugal union. Upon immersing she, in a sense, touches hands with the Creator of the world.

The late Rabbi Shlomo Twerski, my brother-in-law and a brilliant Torah scholar, said it is particularly appropriate that mikvah is a woman’s responsibility,as opposed to a man’s,because mikvah sanctifies the family, and it is a wife’s wisdom, more so than any other family member’s, that builds the home. In a sense, a woman creates her family. For nine months she shapes the perfect internal environment. Then for nearly two decades she sculpts a productive mental, emotional and physical environment. If a woman does not have children, she still is likely to exert the most creative influence on the home and on those living there. When a woman visits the mikvah she asks for a blessing from the Creator of the universe for assistance in her own creative activities – physical, spiritual and intellectual.

As with all other mitzvahs – or commandments – we go to the mikvah because it is G-d’s will. We also know that G-d understands our needs better than we or anybody else ever will. Although we need no better than these reasons, we also know that, for all of our intelligence, we can never understand the ultimate reason behind this or any other mitzvah, since as mortals our ability to comprehend is limited. Nonetheless, Judaism encourages us to explore each mitzvah to the best of our abilities.

All mitzvahs are expressions of Divine kindness, and mikvah is no exception. The Talmud, expounding on the laws of the Torah, explains that, in terms of sexuality, something constantly available loses luster in our eyes. In this regard, when excitement in marriage eventually gives way to routine, divorce is too often the unhappy result. This is the first and most obvious advantage of mikvah. For approximately two weeks every month a husband and wife are off limits to one another. Because of this monthly vacation, the Talmud tells us, husband and wife become like a new bride and groom each month, again and again.

There is a perpetual freshness to a relationship. Ask any couple who practices family purity and they will confirm this is so.

Another advantage of mikvah is that it teaches us the value of restraint, in a world where infidelity is all too common. (It has been estimated that nearly one of every two married man has been unfaithful). In a Jewish marriage, husband and wife cannot have access to one another at regular intervals. This exercise in restraint becomes a learned response in the outside world, when temptations arise. In addition, mikvah teaches us that we are not objects, since a husband and wife are not physically always available to one another. In a society which continues to treat women as objects, in spite of feminism, this remains an invaluable lesson.

The separation inherent in family purity affords us opportunity to regularly focus on ourselves as individuals. Each of our souls was brought down to earth in order to actualize that which is unique. In marriage it is easy for a couple to become lost in one another. This is not the Jewish ideal. The “oneness” in Jewish marriage is not a unity of sameness, of identical mates who neither oppose nor challenge each other. Marriage in Jewish life is a dynamic interaction between two individuals who maintain their identities, while joined by one goal, one heart and one soul.

Finally, mikvah teaches us to communicate more effectively with our partners. During the two weeks without physical contact, a couple must confront each challenge through discussion, rather than perhaps avoiding a problem with a hug and a kiss. During the two weeks without physical contact, husband and wife learn to discuss even the most difficult issues in their relationship. In getting to know each other’s innermost thoughts, they develop true intimacy.

The depths and many inner meanings of mikvah and family purity are beyond the scope of this class. In simple, effective terms one thing is clear: without serving a higher purpose, our physical intimacy remains just physical. With G-d’s presence through mikvah, the sexual relationship is transformed into an act of holiness and the highest expression of Jewish spirituality.

A Hedge of Roses, Norman Lamm
Waters of Eden, Aryeh Kaplan
Responses to this and any other “Women in Judaism” classes are welcome.

Lecture by Mrs. Feige Twerski, adapted from “The Intimate Road: Men and Women in Jewish Relationships,” published 1993. Mrs. Twerski provides insight into the challenges facing the family today, with emphasis on the role of the contemporary Jewish woman. For a listing of her cassette offerings, please call -800-878-5000.

Responses to this and any other “Women in Judaism” classes are welcome. Responses may be reprinted on the bulletin board at the Jewish Renaissance Center website (http://www.JewishRenaissance.org).

« Men and Women in Jewish Relationships Part I
Privacy: Is it a Feminine Trait? »