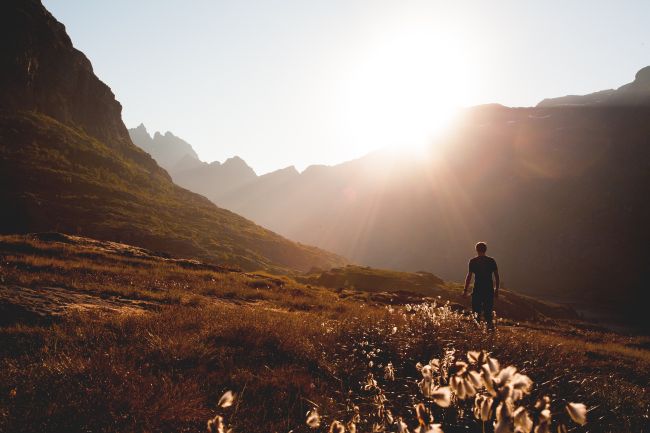 “Perhaps a person will say, ‘Since lust, honor and the like are a bad path which remove a person from the world, I will separate from them exceedingly and distance myself to the opposite extreme.’ [And he will pursue this] so much so that he will not eat meat, drink wine, marry a woman, live in a nice dwelling, or wear nice clothes. Rather, [he will wear] sackcloth and rough wool and the like as do the Edomite clerics (‘komrei Edom’). This too is a bad way, and it is forbidden to follow in it.

“One who follows this path is considered a sinner. Behold, regarding the Nazir (who takes upon himself vows of separation — not to consume grape products, become impure, or cut his hair — see Numbers 6) [Scripture] states, ‘And he [the Priest] will grant him atonement for that which he has sinned against a soul’ (v. 11) (implying denying himself the pleasures of the vine was a form of sinning against himself). The Sages [further] said, ‘If the Nazir who only separated from wine requires atonement, one who denies all things from himself [through fasting] all the more so’ (Talmud Ta’anis 11a).

“Therefore the Sages commanded that a person not deny himself other than that which the Torah denies him. Nor should he forbid permissible things by way of oaths. Such did the Sages say: ‘It isn’t enough that which the Torah forbade that you want to forbid upon yourself other things?!” (Jerusalem Talmud Nedarim 9:1). Likewise, people who fast constantly are not following the proper path. The Sages forbade a person from afflicting himself through fasting. Regarding all such matters King Solomon commanded: ‘Do not be overly righteous, and do not be too smart. Why should you become desolate?’ (Ecclesiastes 7:16).”

The overall theme of the Rambam thus far has been the importance of following the middle path in life. At the end of the second chapter, he singled out lust and honor (among other traits) as ones particularly antithetical to spiritual living.

This week the Rambam offers an important counterpoint to his earlier theme. We must eschew lust and honor, but not to the point of withdrawing from the world. The Torah forbade many things upon us — but the G-d who created us certainly knows what our limits are. What the Torah forbade we must forgo — for G-d knows that we can do without such. Yet that which the Torah did not forbid we may enjoy — and show gratitude to the L-rd who has granted us such.

(In addition, the Talmud writes that there is nothing forbidden in this world for which G-d did not provide a permissible equivalent (Hullin 109b). Denial is not for the sake of making us suffer. It is because the G-d who created this world knows that some things are spiritually harmful for man. But He graciously offered us a permissible alternative. (Enter imitation bacon bits, I suppose…))

I feel there are a lot of significant ideas in this law. The overall theme is of course one theological man has grappled with throughout the ages: How should man relate to the physical world? Doesn’t physical enjoyment — even the permissible sort — basically draw us away from spirituality? Why do our bodies crave so much of that which is antithetical to holiness? And is religion basically a matter of choosing the soul at the body’s expense? Or is there some middle ground? But isn’t any compromise with our bodies basically a concession to our animal? And further, what is the ideal? That we not be moved by physical lust in the slightest — that we live as the “Edomite clerics” of the Rambam?

(Pardon my betraying the Rambam’s circumspection, but Edom is the name of the nation descended from Esau (see Genesis 23:30 and Ch. 36). The Sages see Esau as the progenitor of the Roman Empire and more generally the Western world which was heir to its legacy. “Edomite clerics” are thus Christian clergymen or devotees, Christianity eventually becoming the official religion of that civilization. There is certainly a strain within Christian thought which views pleasure as basically evil and to be shunned. The truly holy person lives in a monastery or nunnery, celibate and isolated from the outside world, accepting upon himself vows of poverty, etc.) Needless to say, to make such a comment even in passing the Rambam required great circumspection. Likewise, he could virtually write nothing critical of Islam, the religion of the society in which he lived. (He referred to Muslims as “Hagarites” and the like.))

I’d like to begin by making an even more basic point — one with I think will shed light on the true error of such behavior. The Rambam began by stating that one may say that since both lust and honor are so evil, he should avoid them to an extreme. He then continued by listing all sorts of ascetic ways a person might be tempted to live — not eating well, not marrying, dressing in rags, etc. These all seem to relate to the eschewal of pleasure. What about the Rambam’s initial point that such a person may want to avoid honor to an extreme as well? Did he just fail to illustrate that? And if he did proceed to discuss lust alone, why did he bring up honor to begin with?

I believe, however, that the Rambam in his illustrations did not omit honor. Mistreating oneself physically is not only a way of crushing one’s physical drives. It is a way of destroying one’s self-respect as well. Degrade and debase yourself and you send yourself a message: that you’re just not worth taking care of. I’m an evil animal which craves the basest of pleasures. And by crushing and repressing your entire physical side you destroy your sense of self-worth as well. You go about treating yourself as the worm you’ve convinced yourself you are. And not only are you denying yourself the permissible pleasures the human body needs and the Torah permits, you are telling yourself you’re so evil you’re not even worth the trouble.

And this sheds light on the true tragedy of such behavior. On the simplest level, disproportionate asceticism is a denial of human nature and is a failure to appreciate the wonderful pleasures G-d has granted us in this world. But as we’re beginning to see, there are far more profound evils here.

Firstly, as we’ve already stated, crushing my physical side destroys my sense of self-worth. Degrading myself implies I’m basically totally evil inside — I must repress all those awful tendencies within. And if I tell myself that too strongly, I’ll convince myself that deep down I truly am an evil animal. And it will be completely consistent with such a mindset to occasionally slip and commit the worst of abominations — once I get fed up with repressing myself so much. That’s why it’s not uncommon to find people who live the most ascetic of lifestyles to be caught engaged in the most abhorrent behavior. (Of course the media is always gleefully there to report it too.) Not only does unwarranted denial often backfire, but the self-negation itself tells the person that deep down he really is all that bad.

One who crushes his body will perhaps feel that his soul will then soar free, unencumbered by physical drossiness. But I somehow doubt that once a person has negated half of himself that the other half will thrive. At best he will be — and see himself as — a half-alive cripple. Telling yourself half of you is a mistake (or at best a “challenge” G-d has given you to overcome), is a great way of convincing yourself that overall you’re not worth all that much, that you’re hardly a divine being fashioned in G-d’s image. And all of this is making the most basic theological mistakes in the book — imagining that G-d actually made a mistake — that He gave you a body which you would be much better off without.

Rather, we must take care of ourselves and live normally. And this is not simply because otherwise we’ll go hungry and frustrated. It is because it tells us an important message about who we are. The Midrash (Vayikra Rabbah 34:3) writes that the great sage Hillel once excused himself from his students, saying that he needed to go perform a mitzvah (good deed). When his students inquired which mitzvah, he responded: going to the bathhouse. His students asked further, what kind of mitzvah is that? He explained that when the king places his statue in public places, the fellow who is appointed to wash and clean it is paid wages and accorded honor. All the more so I, formed in the very image of G-d, as the verse states “For in the image of G-d did He make man” (Genesis 9:6).

Hillel was a person who recognized everything G-d grants us must be revered and treasured. And it was hardly in the sense of body worship, but an appreciation that all G-d has given us is worthy, and a utensil to be used in service of the Divine.

We can thus appreciate the danger of falling into some of the traps that some sincere truth-seekers — both Jew and Gentile — occasionally fall into. Denying yourself certain pleasures that you feel are getting the better of you may certainly be appropriate. Recall that not long ago (Ch. 2, Law 2) we discussed the Nazir, who realized he had to do without the wine the rest of us can enjoy. There is a time for such abstention — in prudent and carefully-considered steps. But the complete denial of the human nature or the total debasement of ourselves as human beings: such are wholly outside the scope of the Jewish weltanschauung. (I’m just showing off; it means world-view.) 🙂

Rather, the Jewish view is much as people say, “My body is a temple.” True, many things don’t belong in a temple and are not in accordance with its sanctity. But our bodies must in a sense be revered. For debasing ourselves utterly is implying that we are worthless and contemptible beings. And in the Jewish view, nothing could be further from the truth.

Before we close, I do have to confess that we haven’t yet really answered our basic question above: Can we really enjoy physical pleasures without drawing ourselves away from spirituality? True, crushing ourselves is not the Jewish way. Yet aren’t physical pleasures basically anti-spiritual? I feel the answer to this will be addressed in the next law in the Rambam. So G-d willing we’ll wait for the next installment.