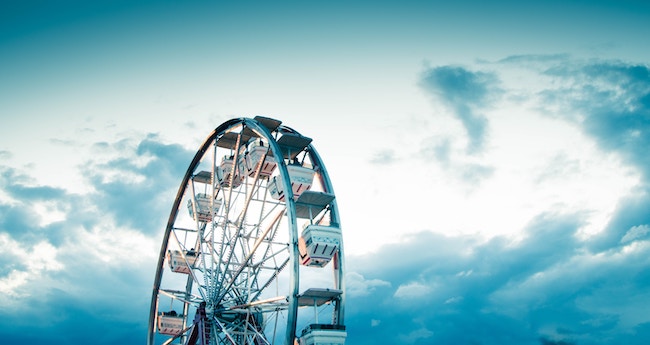 I went to an amusement park that has a fee for children over three years old, and is free for children under 3 years old. My child’s third birthday – according to the secular calendar – occurred 3 weeks before our visit, but his third Hebrew birthday was still a week away. I am pretty sure that the amusement park is referring to my child’s secular birthday. Can I say the child is not yet 3 years old?

I think so. Under three means that a child is at a certain level of infancy, and when he or she passes the age of three, there is a bit more maturity. But a person could ask the other way around — what if it’s past the Hebrew birthday and it’s not yet the English birthday?

Can you have it both ways?

So if a person tends to follow the English birthday, he should be consistent?

RABBI BELSKY: Be consistent and do it one way for all your kids. A Jew has a right to date his age from the Hebrew birthday, because that’s our way of defining a person’s age. But a person cannot switch it back and forth based on what’s to his advantage.

I tell people this idea often. People commonly go to the eye doctor for an eyeglass test, and they write down that they have conjunctivitis so that they can collect money from their medical insurance for the eyeglass test. This is done all the time.

This is one of the most horrible things to do. The Mishnah in tractate Pe’ah says that whoever poses as a cripple in order to collect tzedakah — charitable money — will not leave this world until he suffers that exact sickness. When a person writes down various sicknesses in order to get money from medical insurance, the situation is the same — and he will not leave this world, according to the Mishnah, until he experiences those sicknesses.

QUESTION: Actually, it happens sometimes that a person doesn’t feel that bad on a given weekday, but he calls in sick. How sick does a person have to feel to take a sick-day?

It’s hard to say. It’s true that if a person has used up his sick-days, and if he stays home it may cost him money, he may run into work. On the other hand, if he has the same condition and he hasn’t used up his sick days, then he might be more lenient with himself and take a sick day – and he might take a sick day even if he just has a little sniffle. That’s the way people are, you can’t change human nature. But if he’s not sick at all, and yet he calls in sick, he’s absolutely doing a disgraceful thing.

Okay, a tiny bit sick — that’s what sick-days are. But a person should keep in mind, if he ever gets really sick it might cost him, because he may have already used up his sick days.

Each week we will ask a one or more questions to Rabbi Yisroel Belsky, Rosh Yeshiva of Torah Vodaas, and present his answer.

NEXT WEEK’S QUESTION WILL BE:

I bought a portable phone with a one-year warranty. It broke several times, and each time the company I bought it from replaced the phone. The last phone they sent me lasted for 3 months and broke again. But at that point the one-year warranty had expired. It seems to me that the warranty should be that a single phone is protected for a year. When I called, however, they asked me when I originally bought the phone. Do I have any leeway in what I say so that I can get this one replaced too or do I have to tell them the actual date, which would probably mean that the company will no longer replace the phone.

I buy a monthly bus ticket from an Orthodox owned commuter bus company. The booklet says that it is not transferable. Can I sell a ticket to someone else? Can another person in my family use the ticket?