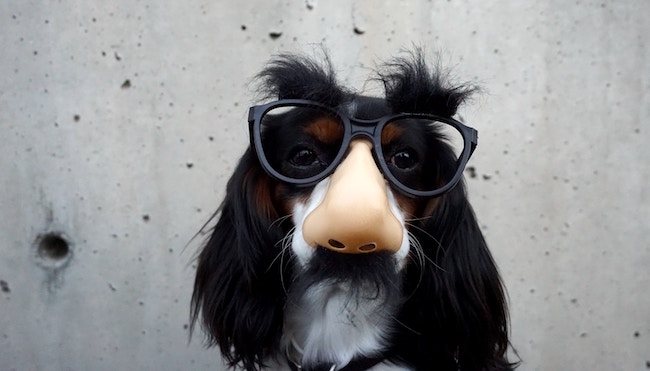 Avraham lifted up his eyes and saw three men standing a short distance from him. (Bereshith 18:2)

The three strangers who visited Avraham were not men at all; they were angels disguised as men. Since Avraham had been experiencing a great deal of pain following his brith milah, God brought a heat wave to the region so that people would not travel. This would give Avraham a chance to rest, for he would not be bothered by guests. However, seeing that Avraham was distressed by the fact that no guests were coming to his home, God sent three angels disguised as men to visit him (1).

In circumstances in which it is clear to everyone involved that an untruth is being told it is not considered sheker (2). For this reason, we may disguise ourselves on Purim, or dress in costume for a performance – even if our identity is unrecognizable – without fear that we are deceiving others (3). Since everyone knows that the mask hides someone, we need not concern ourselves with the ramifications of using a ruse. Avraham, on the other hand, did not know that his “guests” were really angels. Was he not being deceived into thinking that his visitors were men?

The Gemara cites the story of Rav Akiva and his wife who were extremely poor and possessed nothing more than straw to sleep on. God sent the Prophet Eliyahu to them, disguised as a beggar, to ask them if they had some straw to spare. Rav Akiva and his wife, who had been feeling the privation of their dire financial situation, found new hope in the realization that someone else was even poorer than they were. For the sake of alleviating their anguish, Eliyahu was permitted to impersonate a beggar in need of straw (4).

From the above incident the Gemara derives that in a situation in which someone needs comforting, the halachah permits us to act like Eliyahu (5). For example if someone complains to us about his monetary problems, we may tell him that we are experiencing financial difficulties of our own, even if this is not so. Similarly Avraham, the pillar of kindness, was greatly distressed that he did not have a single guest. The angels alleviated his spiritual pain, and performed a tremendous act of kindness by coming to Avraham dressed as mortal beings.